Updated with video: North East Independent School District Trustees agreed to investigate the process for changing the name of Robert E. Lee High School after public comment on the issue dominated the school board meeting for the third month in a row.

Senior Kayla Wilson began the effort in August with a petition on Change.org, that now has more than 11,000 signatures (here is her story and a link to the petition). "I am of voting age, and I will be exercising my right to vote," she told NEISD trustees at their Oct. 12 meeting.

More than a dozen people testified in support of her proposal, including Tom Weesly, who said a business associate "made a judgement about me as a racist" because he was a graduate of Lee. "Let's not give any other employer that excuse," he told the board

Camille Adams, Kayla's mother, chided the trustees for not "answering the call of your community" to tackle the issue. "Your silence has created a hostile environment for my daughter," she said.

Others criticized the board for ordering students and teachers not to discuss the matter, a move that drew a rebuke from the American Civil Liberties Union. (Read more about that here.)

The board was poised to adjourn without comment again, when District 7 Trustee James Wheat made a motion to request a report on how other school districts and the University of Texas handled similar issues.

His motion was seconded by the lone African American on the board, District 2 Trustee Edd White, along with District 3 Trustee Sandi Wolff before passing unanimously.

Full video from the Oct. 12 NEISD Board meeting

Editor's note: The headline on this article has been corrected to indicate that the board wants to examine the process, and is taking no action. 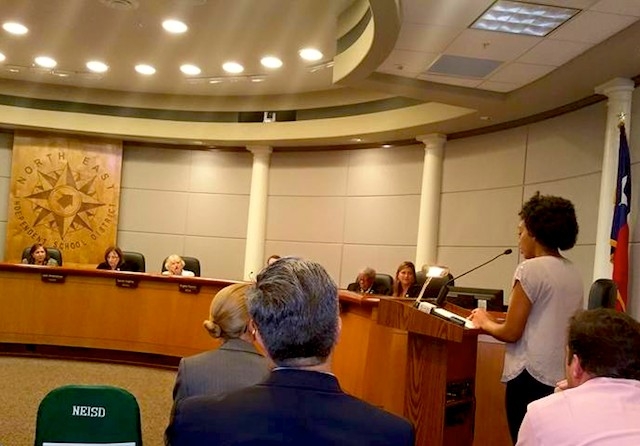