During the last of 12 webcasts, Brack TV students Erica Guillen and Matthew Charles handed off their cameras and donned caps and gowns to graduate as class officers with the Brackenridge High School Class of 2013.

Then Brackenridge Salutatorian Georgina Cortinas opened her speech by wishing all the dads in the audience a happy Fathers Day. She gave her own dad a very special shout out: "He couldn't be here today," she said, "but he is watching online" from Afghanistan, where he is deployed.

Those kinds of stories emerged as the NOWCastSA staff teamed up with Brackenridge High School Media Magnet Teacher Robert Blackard and his Brack TV students for the third year to produce high school graduation ceremony webcasts. The project was underwritten by the US Department of Education on behalf of Eastside Promise Neighborhood and San Antonio's commitment to education.

This year the team produced a record 12 webcasts over a 10-day-period from three different locations: the Alamodome, Trinity University's Laurie Auditorium and the historic and ornate Jefferson High School. You can sign the guestbook and replay the videos here.

Eight Brack TV students, including Erica and Matthew, received a combined total of 253 hours of training and mentoring.

Nearly 1,000 different people watched the graduations live for an average of 23 minutes each, while another 1,663 viewers from 11 countries around the world had replayed the videos later as of June 18.

To date, 48 percent of viewers - 2,269 - used a mobile phone or a tablet to access SAISD graduation content on NOWCastSA.com. When the webcasts are live, no app is needed to watch. Because of that, one person was able to watch on a Playstation III and another watched on a Nintendo Wii.

NOWCastSA created separate video pages for each school, along with a guestbook for visitors to sign. You can access the school pages by clicking on a school logo on this page.

NOWCastSA donated its Livestream channel for the webcasts, and used a NewTek TriCaster TC40 to stream the signal. Omega Broadcasting provided the TriCaster

In addition to the traditional high schools, the NOWCastSA and Brack TV team webcast four other graduation ceremonies: the GED Graduation and the graduations for Travis Early College High School, Cooper Academy and Navarro High School.

Those campuses are designed to give help to nontraditional students and help them succeed and excel.

At Travis, 47 of the 62 students who got a high school diploma had already received an Associates Degree from San Antonio College in May.

Cooper Academy uses individual counseling and a flexible schedule to help students who have dropped out of school return to the classroom and earn a diploma. The school's motto is, "My past is not my future."

Navarro is an alternative school that provides help including an on-site day care to help meet students' needs as they earn a diploma and prepare for college and careers. 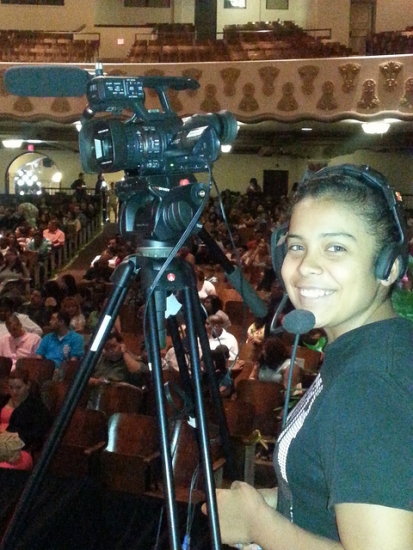