Has Westside Creek Flood Hazard Mitigation and Pedestrian Connectivity Been Short-Changed by Planned Downtown San Pedro Creek Improvements? Will Work and Spending in the Next Five Years Address Lopsided Implementation? 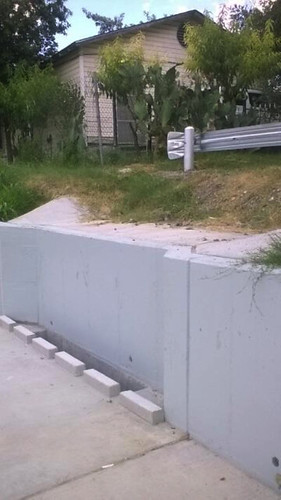 I had the chance to ride my bike along the recently opened (at least a year behind schedule) first half-mile reach of Alazán Creek trail – south of Woodlawn Lake Park to Lombrano Street.

My first impressions: why did this half-mile concrete trail take so long to build?  Why are there no lights? Why is there no apparent flood mitigating landscaping or riparian restoration? Why did I see young children leaping from a four-foot-high ledge (See Figure 1) to enter the trail from a neighborhood side street not far from a public elementary school?  Why haven’t various neighborhood sidewalks and paths been extended or improved to connect safely with Alazán Creek Trail?

Living near Woodlawn Lake Park, I have become accustomed to substandard pedestrian infrastructure, including substandard new pedestrian infrastructure – from the ripping out of existing and disconnected 4-ft-wide sidewalk segments to be replaced with new disconnected 4-ft-wide sidewalk segments to a new Woodlawn Lake Park path that doesn’t quite reach park bus stops – but what happened to Alazán Creek?

We moved to the neighborhood and I even voted in county elections based on the promise of (in our lifetime) Westside Creek flood hazard mitigation through ecosystem rehabilitation as well as safe, ADA and neighborhood accessible connected trails for walking and biking to downtown via Alazán as well as Martinez (See Figures 2 through 4) – as detailed by sources including the San Antonio River Authority (SARA) approved 2011 Westside Creek Restoration Project Conceptual Plan, Express-News reporting from May 2013 and the US Army Corps of Engineers in July 2013. 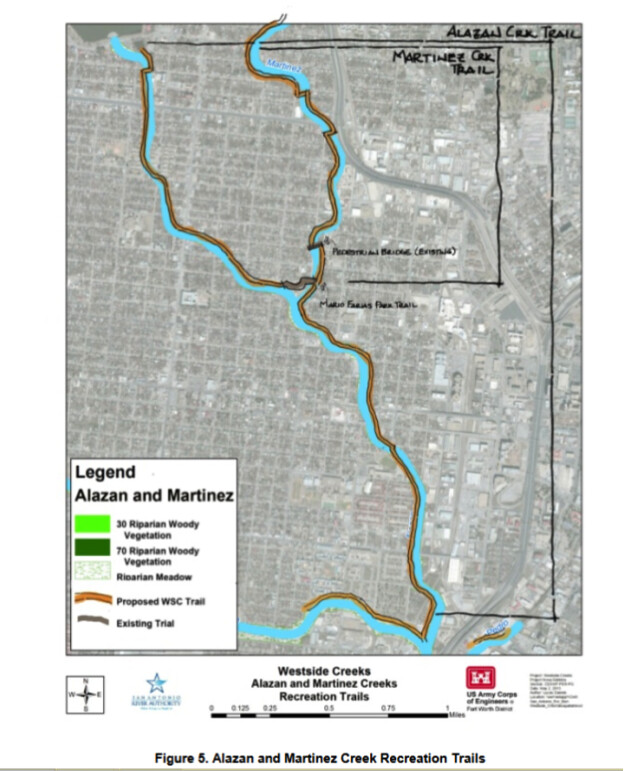 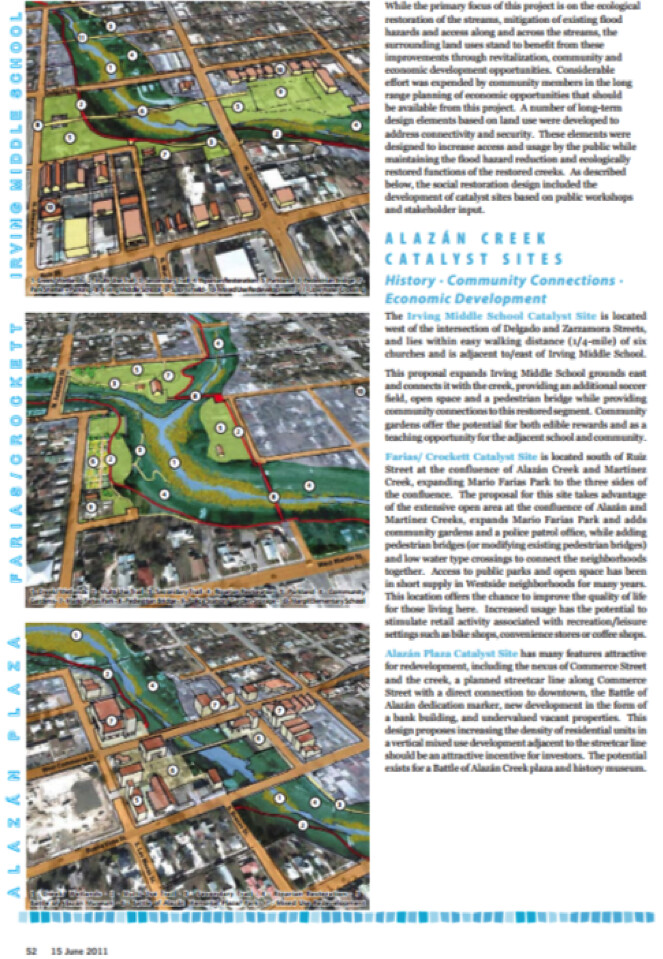 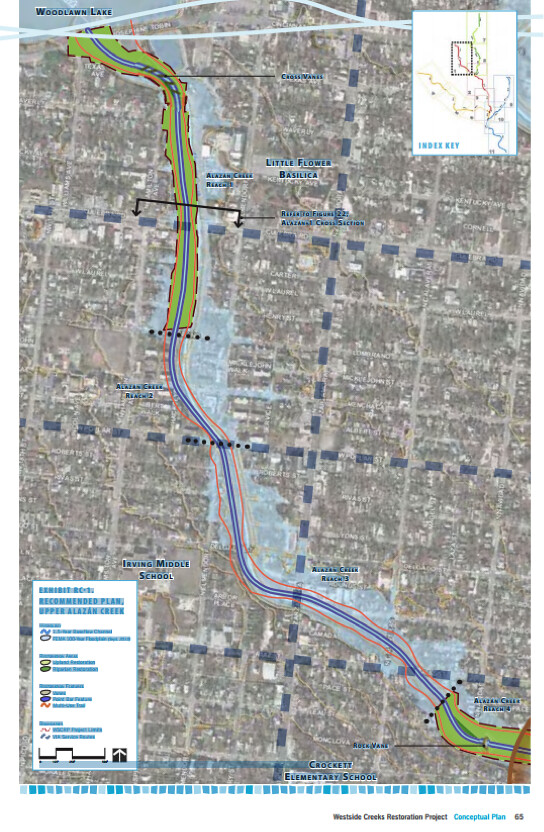 Apparently in December 2013 as part of a subsequent round of SARA-led Alazán Creek planning, residents expressed concern about a re-designed Alazán Creek trail’s “. . . connectivity to neighborhoods, traffic, security and potential flooding,” including as worsened by a lack of trail lighting or ecosystem restoration as part of the re-designed first reach of work. Expected to be completed by mid-2015 and originally budgeted for in 2010, the first reach of Alazán Creek trail – a half-mile concrete path along the eastside of the creek – finally opened to the public this June.

Despite longstanding plans for Alazán Creek trail to improve connectivity with Woodlawn Lake Park, there’s currently no safe pedestrian crossing of Cincinnati Avenue / Josephine Tobin Drive (not even a posted yield sign) from the park to the new trail head off Alexander Avenue.  It is a mad dash across a wide, curved and fast avenue between the trail head and the main section of Woodlawn Lake Park, including during major events such as July 4th celebrations.

There are also no clear connections between the new Alazán Creek trail head and the bike lanes on Cincinnati Avenue / Josephine Tobin Drive – meant (at least, for now) to ‘join’ Alazan Creek trail with the equally stubby Martinez Creek trail segment also recently opened (See Figure 5); these bike lanes seem never patrolled for parked cars that often obstruct them. Sadly and almost obviously in this part of town, pedestrian road markings around Woodlawn Lake Park including bike lanes have not been maintained or improved as part of Westside Creeks trail or other infrastructure work. 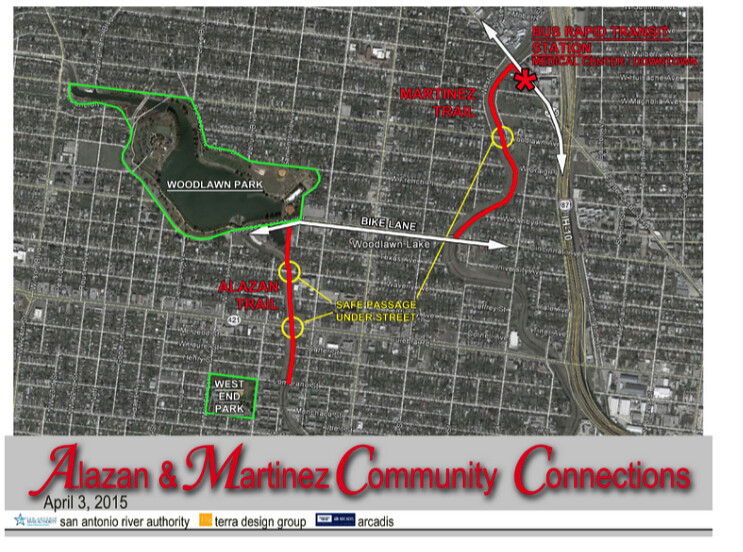 Alazán Creek trail currently ends abruptly a half-mile down the creek at a point on Lombrano Street with no curb cuts and a long block east of West End Park and the City’s Senior Center there. Sidewalks on Lobrano Street have not been improved to meet Federal ADA passing requirements (a 5-ft by 5-ft passing area at least every 200 feet) or to allow easy ADA access to the new trail head from West End Park or surrounding housing.

The first reach of completed Alazán Creek trail work (sometimes framed by SARA as the ‘completion’ of the Alazán Creek restoration project) suggests disregard for the Westside Creek Restoration Project Conceptual Plan and connected Westside Creek trails approach approved by SARA, endorsed by county voters and supported by the US Army Corps of Engineers – including the recommendation that phase 1 work construct connected “initial trails” across all creek reaches “in order to provide for neighborhood connectivity” from the start of the project (see Figure 6). More critically, the work completed to date shows disregard for neighborhood residents including kids, seniors, cyclists and those with ADA requirements as well as the flood hazard mitigation and related ecosystem restoration aims used to obtain public funding for ‘Westside’ Creek improvements.

It is hard to accept that the same SARA that built the Mission and Museum Reaches and is about to embark on an extraordinarily expensive (more than four times original cost estimates – see Figure 6) and expedited “phase 1”/ downtown San Pedro Creek Improvement project ‘completed’ this short reach of Alazán Creek Trail in 2016.

Based on 2013 reporting, it seems that San Antonio is about to spend more on pedestrian bridges across the recently re-designed downtown San Pedro Creek segment – $28 million of an estimated $175 million – than what has been spent on all Westside Creek flood hazard mitigation and connected trail work combined since first budgeted in 2010. 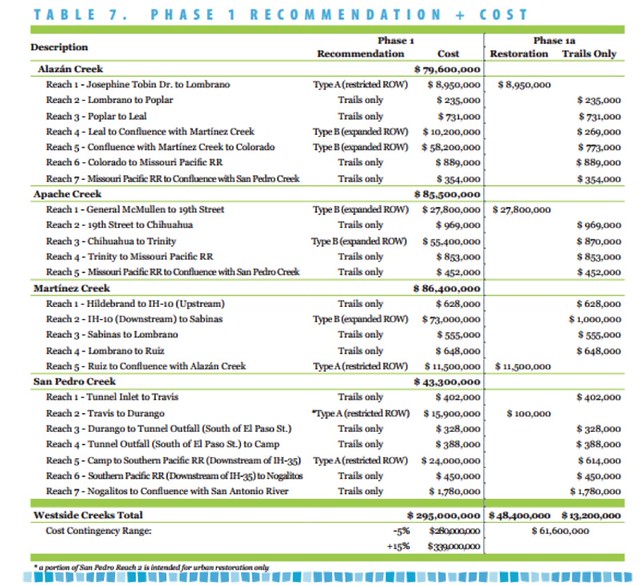 As we set our 2017-2022 bond program as well as rush (and likely pay more) to try to complete recently conceived downtown projects in time for the City's 2018 Tricentennial, we should look to the SARA-approved 2011 Westside Creek Restoration Project Conceptual Plan as well as the City’s 2015 Hazard Mitigation Action Plan to guide our flood hazard mitigation and creek improvement spending and implementation – including allocating approximately $80 million for Alazán Creek restoration and catalyst sites work (see Figure 3) as well as constructing immediately connected multi-use trails across all Westside Creek reaches as originally planned.

“...You have neglected the West Side creeks for all these years… this is a story that hasn't been told. They haven't done justice to this area.”

Mark Tirpak is an urban planner and researcher as well as contributing author of:
Healthy Urban Development Checklist (2010)
Rethinking Life at the Margins: The Assemblage of Contexts, Subjects, and Politics (2016) 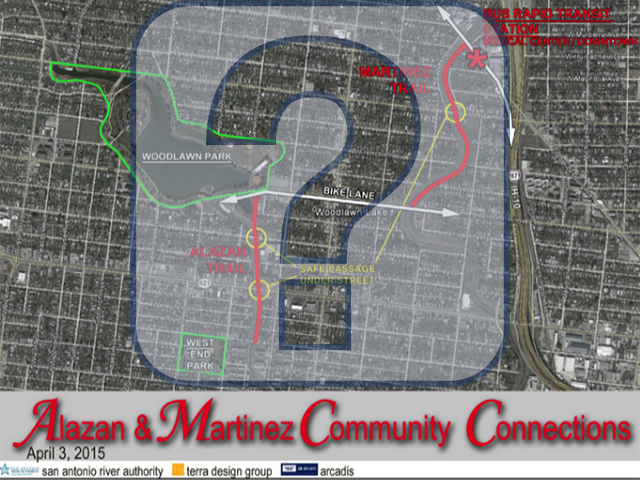