Per the City of San Antonio’s invitation to the public, I am offering feedback on the Brackenridge Park Master Plan which is to be finalized soon and considered for the City’s 2017 bond program.

My feedback is informed, in part, by recent information about San Antonio’s parks published by the Trust for Public Land (TPL), as well as with hope that my recommendations will strengthen the final Brackenridge Park Master Plan and shape how public funds allocated to the plan are used.

I am concerned that much of the draft plan seems devoted to extraordinarily costly (estimated $150 million), wasteful and ultimately car-centric projects at Brackenridge Park.  As San Antonio’s extremely poor 2016 TPL ParkScore ranking makes clear (ranked 71 out of 100 US cities), the city should be using public resources to improve pedestrian access to parks from specific areas – for Brackenridge Park, from the west (see Figure 1) – including by enhancing (not closing) some park entrances and corridors.

In contrast, major elements of the Brackenridge Park draft plan include:

The 2016 TPL ParkScore for San Antonio as it relates to Brackenridge Park (see Figure 1) demonstrates a strong need to improve pedestrian access to the park from the west along the corridors of Hildebrand Avenue (reaching the park through Trinity University and Devine Road and Brackenridge Road), Mulberry and Huisache Avenues (reaching the park through St. Mary’s Street and Alvin Street via Stadium Drive) and St. Mary’s Street as far southwest as Ashby Place. 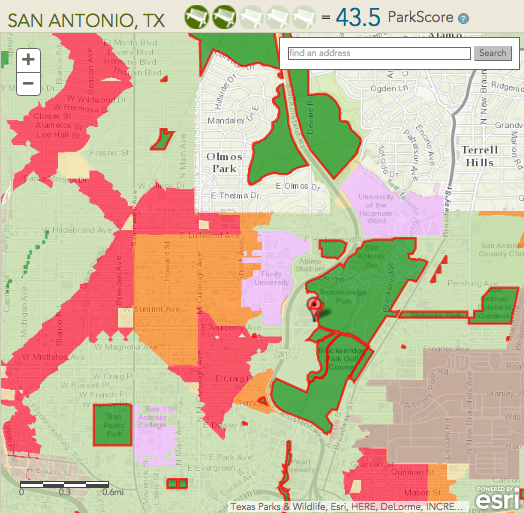 Figure 1: The 2016 TPL ParkScore for the area surrounding Brackenridge Park. Areas colored red and orange indicate poor access to San Antonio parks ( as measured by a 10 minute or half-mile walking distances to park entrances) – with red areas indicating areas with the highest need for improved park access, based on residential density and the ages and average income of residents in these areas.  Image from www.parkscore.tpl.org.

The draft Brackenridge Park Master makes little to no effort to improve pedestrian access from these areas, including by not referencing either existing VIA transit routes or B-Cycle stations in the plan. More critically, major elements of the draft Master Plan appear to worsen access to Brackenridge Park from western corridors – including by hampering existing public transit options and connections (particularly VIA’s 8, 11 and 509 routes) and closing public rights-of-way that support access to the park from the west.

The closing of rights-of-way could also potentially ‘sink’ efforts to revitalize Sunken Garden Theatre, which the draft master plan touches on as a possible project, creating a scenario of a major event at the 4,800-person venue, with only one park roadway, St. Mary’s Street, in and out.

As an alternative to the costly closing of public and transit rights-of-way, building of new structured parking and destruction of the Martinez Softball Field parking lot, I offer six recommendations to improve pedestrian access to Brackenridge Park from TPL identified areas of high need west of the park, as well to improve the park for all park-goers.

These cost-effective recommendations help  address some of the main underlying concerns of the current plan as drafted – namely, improving active transport (walking, biking, VIA and mini ‘train’ use) to and within the park as well as helping to mitigate unhealthy vehicle congestion, unsafe driving within and surrounding the park and the perceived need for more Brackenridge parking.

Unfortunately, major works proposed with the draft Brackenridge Park Master Plan do not seem to be informed by basic conservation principles, a wide stakeholder consideration, an area mobility study or understanding of how to improve pedestrian access to and within Brackenridge Park where it is needed most – per the findings of the Trust for Public Land as well as evidenced by factors including but not limited to the location of schools, housing, retail, major venues, VIA stops and foot- and wheel-carved ‘desire lines’ around and within the park.

San Antonio’s currently low TPL ParkScore indicates that we should be leveraging available public resources to improve pedestrian access to our parks from key areas of our City.

I hope the city will consider the following recommendations when finalizing the Brackenridge Park Master Plan and with any resource allocations and prioritizations: 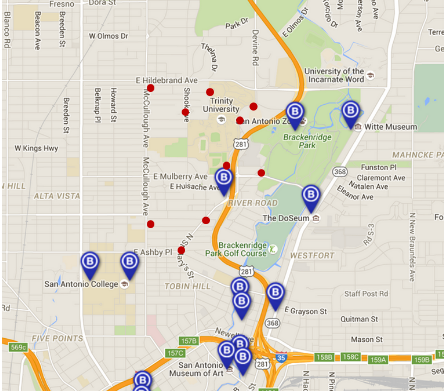 Mark Tirpak is an urban planner and researcher as well as contributing author of:
Healthy Urban Development Checklist (2010)
Rethinking Life at the Margins: The Assemblage of Contexts, Subjects, and Politics (2016) 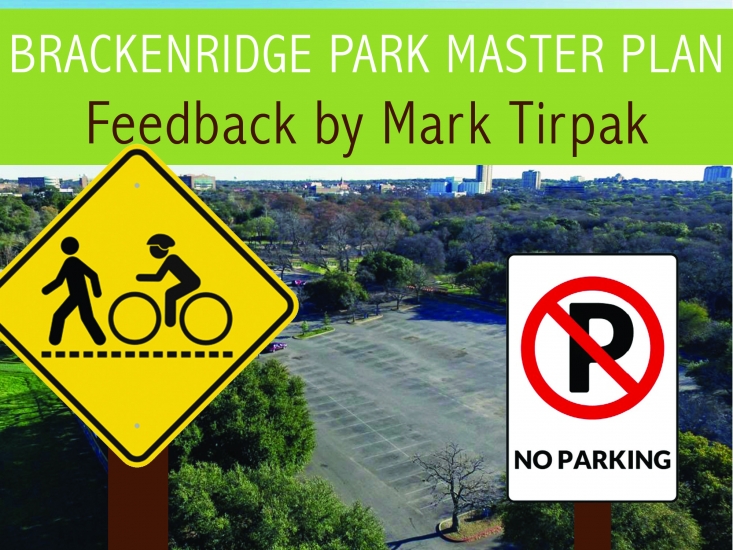