Opinion: Honoring Dr. King - Know Your Rights when stopped by the police

Another event is being planned as part of the SNCC Legacy Project. The first event was “The Black Lives Poetry Reading” program. The event was a huge success as the veterans of the local SNCC chapter and veterans of the Langston Hughes Afro-American theatre came together to support our youth in their effort to fight against bigotry, injustice, and police abuse through the medium of poetry. The SNCC veterans and supporters included those that were on the front line in the war against racism. Poetry and theatre were very much part of the liberation struggles in the 1960s and the Langston Hughes Afro-American theatre group was a strong part of the liberation movement. The Black Lives Matter Poetry program took place at the historic Little Carver Complex, located at 226 N. Hackberry.

Education is also an important tool. The next event will provide information on what to do when stopped by the police and how to conduct oneself when contact takes place between police officers and the community. The project in San Antonio will reach out to our youth, and young social activists in the Black Lives Matter Movement, in the form of this very much needed historic event.

The first event, which has already taken place, was a poetry reading. The second event will take place at Antioch Baptist Church on Saturday, Jan. 14, beginning at noon, and include a "Know Your Rights Workshop'. The Rights Workshop will deal with police encounters in minority communities and the program will feature attorneys and SNCC veterans. Presenters will include ACLU (American Civil Liberties Union) lawyers and African American attorneys as well as people that have been treated unfairly by the police.

The brochure advertiisng the workshop is below. 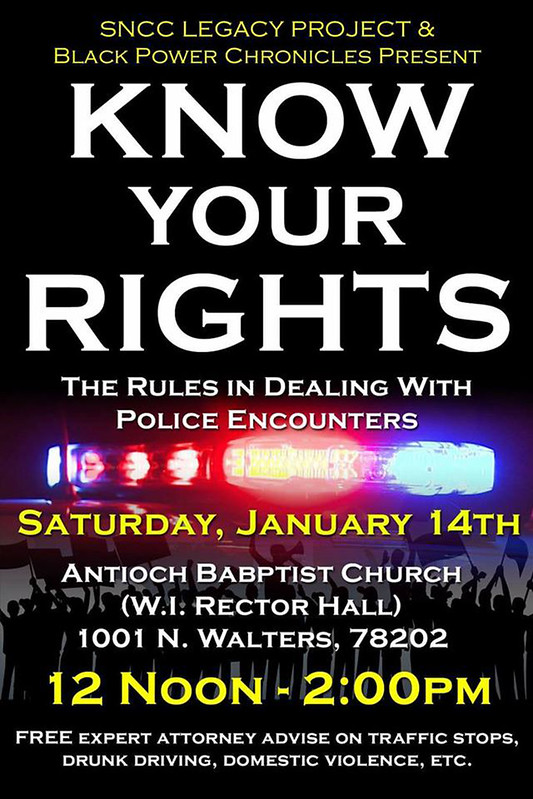 The "Know Your Rights Workshop" is a welcome event as many of the other police community meetings ended in failure. Part of the reason for the failure of the other events is the fact that they never wanted to directly deal with a police union contract that is a total disgrace to San Antonio. The police union contract was stripped of language that would have looked at the previous record of an offending officer to determine a pattern of abuse. Since that time, a few community meetings have taken place that have been a total whitewash of the problem of abuse. One cannot honestly talk about police-community relations without talking about the police union contract and how it took away accountability and openness from the public scrutiny. One cannot talk about creating better cooperation between the police and the public when abusive police officers are allowed to run rampant and out of control. We all know how important it is to “Back the Blue,” but that does not mean we should “Back the FOOL!”

We respect our good officers, but those that abuse our community must be held accountable. The community will be educated on the First Amendment, the Fourth Amendment, the Fifth Amendment, and the Fourteenth Amendment. These amendments to the U.S. Constitution are important to understand because our cars and homes cannot legally be searched without a warrant or probable cause. We must understand that when stopped by the police people do not have to answer any questions or engage in any conversations with police officers. Sure you need to show insurance papers and identification, but that ends the conversation. Lawyers have made it clear that police officers can be told, “I don’t answer any questions.” This is all legal and protected by our Constitution. There are things that we should do as well to put the officer at ease by cutting off the engine and remaining in the car with hands where the officer can see them. We have responsibilities as well in the current climate we live in. There are many more issues that will come up and we invite the public to attend.

If all lives really mattered then no one would have a problem with the “Black Lives Matter" movement and slogan. In the 1960s, the Student Nonviolent Coordinating Committee (SNCC) traveled to the segregationist South to register African Americans to vote. Police abuse was rampant then as well. Today, people across the country are attempting to reform police departments that employ centuries-old abusive practices. The reality of American life is that Black lives never truly mattered, but white lives always mattered. The South’s long lasting system of racial organization was the scene of countless struggles against the system of white privilege that ruled America for hundreds of years. The rules of racial etiquette ruled supreme and any violation of those rules would often mean death, beatings, hangings, and being burned out by mobs of whites, and police abuse. Little has changed in the police abuse category. 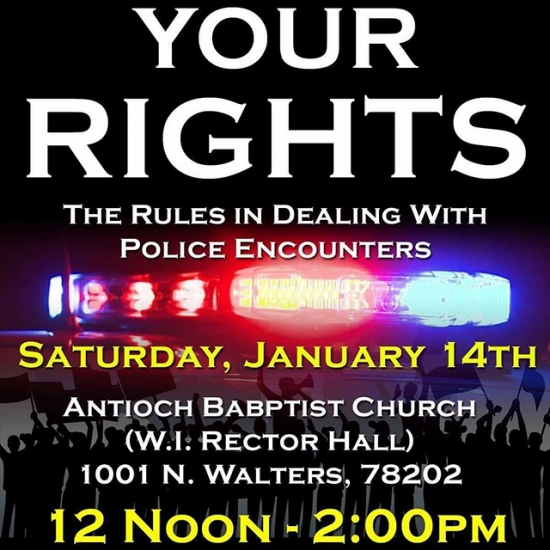