Opinion: My Comments on Imagine Homes in Mahncke Park Neighborhood 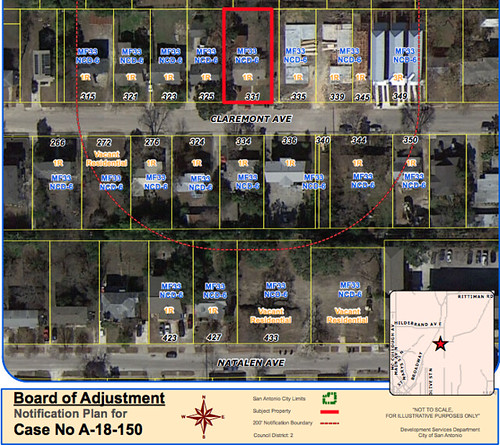 Disclosure: As a nearby property owner, I was asked by the City of San Antonio to comment about Imagine Built Homes’ request for a variance from the Mahncke Park Neighborhood Conservation District rules. The developer wanted to build a new home at 329 Claremont St. eight feet from an existing duplex at 327/325 Claremont St. The Neighborhood Conservation District requires a minimum of 10 feet between structures. The proposed new home would have been 15 feet wide on a 25-foot-wide lot, similar to dozens of others built in Mahncke Park by Imagine Homes since January, 2017. (See story and video of full hearing on Sept. 17, 2018.)

Here are the remarks that I prepared. Click here to watch video of the comments I was able to fit into my allotted three minutes, and the 3-minute video I presented to the board.

My name Charlotte-Anne Lucas. My husband and I bought our home on Funston Place, south of Mahncke Park, in 1995.

We have deep roots here. Almost exactly 100 years ago, my grandfather was awarded his wings as a U.S. Army Pilot on Fort Sam Houston, just blocks from our home. My husband's mother and the late Congressman Henry B. Gonzalez both attended Jefferson High School right after it opened in 1932.

In a city that shamefully ranks among the worst in the nation for economic segregation, Mahncke Park is a sparkling exception, as noted by Dr. Christine Drennon, Trinity University Urban Studies Director, in her October, 2017 presentation to the Mayor's Housing Policy Task Force.

In contrast to the 1920s era bungalows North of Mahncke Park, the area South of the Park has always had more multi-family homes, where military families once lived, right off base. More recently, the duplexes, four-plexes and eight-plexes on Claremont Street and Natalen Street offered affordable homes for people of very limited means.

People who could afford to live there included a cellist in the San Antonio Symphony, and a man raising his three grandsons, who were able to beat the odds of poverty because they could walk to Lamar Elementary School, perhaps the best elementary school in the city.

Mahncke Park is a Neighborhood Conservation District, “designed to protect and strengthen the desirable and unique features of the area, the NCD is a zoning overlay designation that addresses appropriateness of new construction in existing residential neighborhoods and commercial districts."

Before you consider what may on its face appear to be a minor variance request, it is important to consider the character of the applicant, Imagine Homes.

When Imagine Homes invaded our neighborhood, they began by exploiting loopholes to get around the spirit of the NCD, which requires lots that are a minimum of 50-feet wide.

Then Imagine Homes commenced to systematically and shamelessly flaut all manner of rules and regulations, and assault the sensibilities and well being of the people living here.

Those most affected were people of color and people in poverty. People whose first language is not English. Those with the fewest resources to hold the developer accountable or to seek relief.

One-by-one, house by house, renters were pushed out of their homes and displaced, as Imagine Homes bulldozed the duplexes, the four-plexes and the eight-plexes and even some modest single family homes. In their place went 15-foot-wide homes that sell for $378,000.

This video shows what we got and how it went down.

Imagine plundered the connective tissue of the community - the social cohesion of the neighborhood.

As this video shows, Imagine Homes would prefer to break rules than follow them; to disrespect and disregard nearby neighbors and children who are walking to school.

By putting a third "skinny house" on this lot where there was previously a single home, the developer will increase the impervious cover by 58.5 percent. People downhill will notice.

If you approve this variance, you will be saying that thoughtful public policy should take a backseat to a developer's corrosive ability to exploit a neighborhood for short-term profits. And you will be further enabling the economic segregation of San Antonio and the eradication of affordable homes.

(Click here to watch my comments and the video I presented, which was distilled from footage recorded over nearly two years, as Imagine Homes employees or contractors haphazardly rained asbestos siding on the neighborhood, ignored permit requirements to surround demolition areas with a 6-foot security fence, used loud equipment until 10 p.m. and rolled eight cement trucks onto a residential street beginning at 4:15 a.m. The last frames show a separation of less than 10 feet between an Imagine Home and an existing home on nearby Elmhurst Street.) 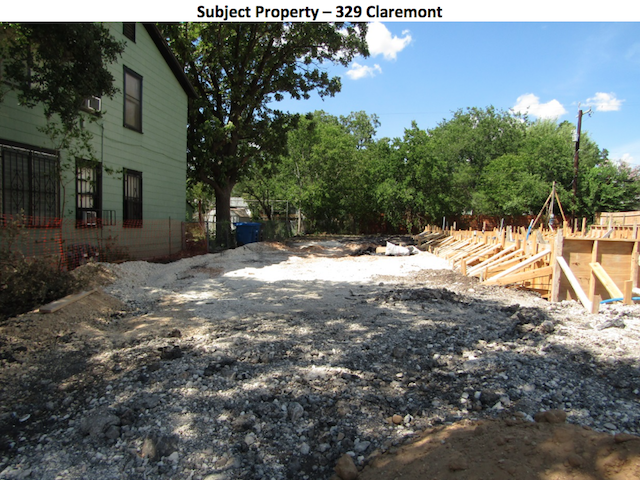