Nobody wants San Antonio to be a ‘dumb’ city, but a recent article published by WIRED (July 2016) hints that we act like one by using public dollars to prioritize and implement the least effective approaches for improving our local transit services – ignoring research and the perspectives of local transit users (including visitors and would-be investors) as well as the efforts of other ‘smart’ cities that San Antonio hopes to connect with.

Specifically, San Antonio has recently invested in BiblioTech digital kiosks at some VIA Transit transfer centers in addition to offering free WiFi at these locations and on board VIA buses. There’s nothing necessarily offensive about these public expenditures (although leaders should note New York’s recent challenges with and removal of public WiFi and digital kiosks). However, these investments appear to come (yet again) at the expense of joint public work that could support faster and more frequent local transit services as well as more walkable and bikeable VIA stations and BiblioTech locations.

The latest VIA and Bexar County joint approach borrows from new amenities including complimentary WiFi and power outlets and entertainment helping to improve necessarily longer waiting and journey time mass transit (characteristics not desirable for local transit) such as city-to-city bus and air travel; such improvements are frequently paid for by private advertising and not generally with public dollars. As the WIRED article indicates, these efforts do not convince more people to use local transit. More critically, they can waste opportunities and public resources for truly transformative local transit service improvements, including efforts aimed at reducing local transit waiting and journey times and otherwise improving pedestrian flows.

The WIRED article is based on research completed by TransitCenter and supported by the experiences and perceptions of regular local bus riders (approximately 3,000 respondents) in cities across the US including Houston.  As part of TransitCenter research, a table of the 'relative importance' of possible local transit service improvements ranks free WiFi, power outlets and related offerings a dead and distant last to other possible public investments. 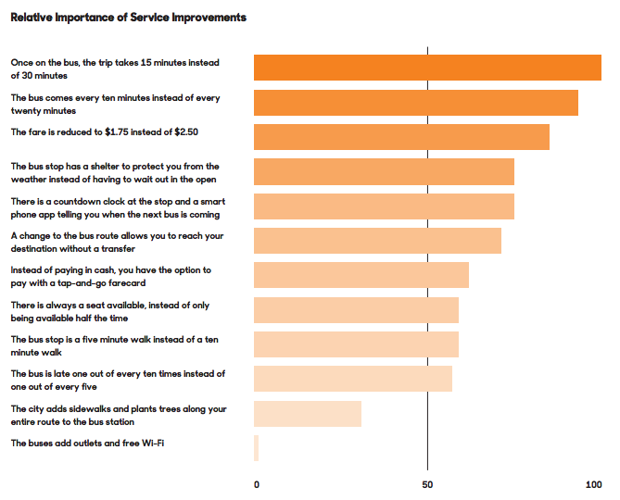 Paraphrasing and adding to TransitCenter’s key findings, the following possible local transit service improvements rate (much) higher than free WiFi and related offerings – and are ordered below in priority:

1. shortened bus journey times (which can be accomplished through traffic light and lane priority as well as faster boarding / on-board fare collection approaches – with an annual pass for more riders the easiest, least expensive and most effective approach to implement and maintain; see research by PlaniFax);

2. decreased bus waiting time (which can be accomplished through traffic light and lane priority as well as faster boarding / on-board fare collection approaches – with an annual pass for more riders the easiest, least expensive and most effective approach to implement and maintain; see research by PlaniFax);

3. decreased fares (fare collection in San Antonio has dropped in recent years as fares and operating costs have increased – with strange denomination fares and ticketing approaches slowing existing services and discouraging ridership. In contrast, many local transit systems have moved from a fare collection on board to a customer service and ‘check and request’ focus that an annual pass for more riders supports – including to decrease possible conflicts and speed existing services);

4. adequate waiting shelters at stops protecting riders from the elements (sun and rain and traffic; San Antonio’s ClearChannel Outdoor could potentially assist with this through their innovative bus stop design incorporating digital advertising);

5. clearly posted real-time and accurate information about bus services at stops (countdown clocks, etc.; San Antonio’s ClearChannel Outdoor could potentially assist with this through their innovative bus stop design incorporating digital advertising. Regardless, it is not enough to rely on personal smart phones and apps);

6. elimination of bus transfers where possible (more direct routing to key destinations as well as alternatives including bike-share and walking between stations);

7. a tap payment or annual pass flash / ‘check and request’ approach to help speed boarding and reduce delays (with an annual pass for more riders the easiest, least expensive and most effective approach to implement and maintain; see research by PlaniFax);

8. buses with enough seating for all (which can be accomplished through greater frequency and reliability of buses as well as alternatives including bike-share and walking between stations);

9. reduced walking time to bus stops (which can be accomplished through safe pedestrian prioritizing street crossings near bus stops including pedestrian ‘scrambles’ -- aka ‘Barnes Dances’ -- and other mid-block crosses and boarding as close as possible to key destinations including at shopfronts and in some cases within parking lots – along with integration of bus stops/transfer centers and bike-share);

10. decreased bus delays (which can be accomplished through traffic light and lane priority as well as faster boarding / on-board fare collection approaches – with the easiest improvement to implement being an annual pass for more riders; see research by PlaniFax);

11. improving sidewalks and planting shade trees along the lengths of bus routes and paths to stops/stations (to support walking as well as bike-share between stops and stations; shade trees at and near VIA stops have been planned since at least 2002 by the City but potentially not implemented or monitored).

As a local VIA bus rider, I have advocated for all eleven priority improvements through various San Antonio channels and without the support of TransitCenter research until recently – simply based on my experiences as a VIA passenger and from using local transit services elsewhere.

Sadly, I don't sense that our public leaders share the perspective of regular and fare-paying local bus and other transit use (public workers and representatives, including local transit improvement advocates like Council Member Rey Saldaña, are given free or steeply discounted San Antonio BCycle annual membership as well as annual VIA passes not currently available to the general public).  As a result, they do not have a first-hand understanding of how to quickly and cost-effectively improve local transit services from a current or prospective (and fare paying) passenger/rider viewpoint, including based on experiences in other cities. It should not be lost on our leaders that the cities we hope to connect with through more direct flights all have better local transit services than San Antonio – to and from the airport but also walking or biking or riding a bus around downtown.

I'm not opposed to BiblioTech expansion and spending, but I miss Bexar County's aim from last summer of integrating San Antonio BCycle bike-share and VIA Transit with County resources including BiblioTech – an idea that could help to address multiple priority local transit service concerns.  As the County likely noted in championing this idea albeit briefly last year, local bus and bike-share integration has been implemented with success in other cities and could lead to improved existing VIA services as well as a better connected and more healthy, safe, fun and inviting (eg. a ‘smarter’) San Antonio. Such integration would likely also help 'save' or at least improve San Antonio BCycle by increasing ridership and membership as well as commercial advertising and sponsorship opportunities for this publicly funded (federal, state, county and local) but currently limited (I say segregated) local transit service.

A combined VIA / San Antonio BCycle annual pass – as potentially easy as adding a VIA EZ Ride annual pass sticker to current San Antonio BCycle membership or keychain cards, with the combined annual pass vended at a price comparable to what a public employee currently pays yearly for these services – could be established quickly and at relatively low cost, helping to improve local transit services and potentially increasing fare and advertising revenue as well as public access to BiblioTech resources. Such a measure would also be compatible with national efforts to build better (more equitable) bike-share for all, potentially attracting outside funding and positive press like Austin BCycle’s $5 annual membership program for qualifying residents (a program that is comparable with offerings in other US cities with bike-share).

In contrast, long planned BCycle stations at VIA's Centro Plaza and Five Points Transit Hub have not been built. Nor have the BiblioTech locations west (Dr. Richard Romo) and south been provided BCycle stations by the County.  Related, there's no BCycle at the City's Cafe College or UTSA's downtown campus (including UTSA's Institute of Texan Cultures at Hemisfair – a Smithsonian affiliate and site of free public talks and educational gatherings) despite past UTSA-BCycle ‘pilot’ pairings and long City, County and UTSA commitments to bridging education, access, mobility and exposure (not just technology) divides.

The BiblioTech kiosks have been ordered and are sure to be installed soon at VIA transfer centers as planned. Hopefully, the County, City, UTSA, VIA and other public partners will now act quickly to better connect BCycle with VIA Transit, Bibliotech and other 'smart' public infrastructure, as well as otherwise complete the local transit service improvements that other cities have implemented and that TransitCenter research suggests is truly our priority public work.

Such efforts could help achieve in the next two years aspects of (currently separate) SATomorrow and VIA’s Vision 2040 planning as well as the City's VisionZero goals and new $7.9m Smart City Initiative – which as proposed seems to rely heavily on the ‘shiny’ tech ‘perks’ WIRED cautions San Antonio and other cities about . . . and that local companies like Toyota, ClearChannel and Amazon have provided other cities (but noticeably not San Antonio) as part of recent research, advertising, and business development.

There's also the chance to shape the 2017-2022 Bond program as well as San Antonio’s joint Tricentennial and 50th anniversary of Hemisfair ‘68 towards improving shared local and visitor mobility – restoring San Antonio’s past national leadership in this regard. Related, there’s the fleeting opportunity for the City and County and VIA and BCycle to reconnect with the future-focused corporate sponsors of Hemisfair ’68 and current ‘smart city’ champions like IBM, Ford, General Electric and 3M  (as well as local companies like Toyota, ClearChannel and Amazon) to assist with our ‘smart city’ initiatives, and particularly in preparation for mid-2018.

As the recent WIRED article and related TransitCenter research suggests and other US and global cities have grasped (and San Antonio leaders knew in ‘68), 'smart' means being better connected and integrated and more mobile, including through more pleasant and safe walking and biking helping to make a range of affordable and useful local transit services fast, frequent  and more direct.  It does not mean killing time at isolated and isolating transfer centers waiting for irregular, slow and unevenly priced buses as the only option in or out – with the chance to access ‘free’ WiFi and digital library materials at these locations or not.

Mark Tirpak is an urban planner and researcher as well as contributing author of: Healthy Urban Development Checklist (2010) and Rethinking Life at the Margins: The Assemblage of Contexts, Subjects, and Politics (2016). 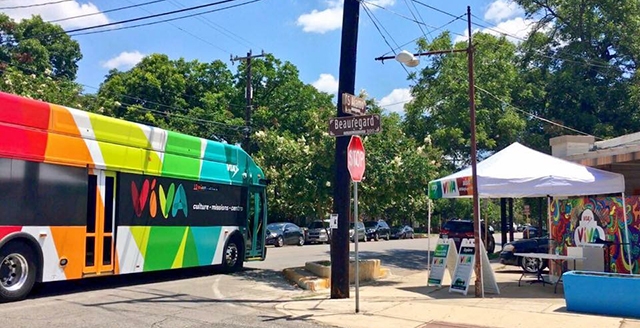