Thursday, Aug. 11, City Council will vote on the three plans that make up SA Tomorrow, the proposed blueprint for accommodating San Antonio's projected growth of 1.1 million new residents through 2040. These plans will establish our development priorities and guide numerous spending decisions in the years to come.

The plans encompass transportation, sustainability, and growth patterns - what kind of development we want to encourage and where. To read the plans, click here.

As you may be aware, the City's Planning Commission approved all three on July 27. However, Commissioners removed provisions from the Sustainability Plan that could have led to the expansion of our dark skies and impervious cover ordinances.

The dark skies ordinance requires downward lighting in new developments in order to combat light pollution. Council adopted these rules nearly a decade ago because the lights from new residential development near Camp Bullis threatened the Army's ability to train soldiers and medics at night. The existing ordinance covers the portions of San Antonio within five miles of Camp Bullis. Yet night training at the Medina Training Annex on the Southwest Side also would be vulnerable to light pollution from new housing developments.

That's why I support restoring the dark skies provision in the Sustainability Plan.

The U.S. military is a long-cherished part of our community, and expanding the ordinance could help protect another training mission. As a tri-chair of the Military Transformation Task Force, I consider us - the City and Joint Base San Antonio - partners. When water scarcity surfaced as a problem for San Antonio military bases, I worked with the City and San Antonio Water System (SAWS) last year to establish a secondary water supply to keep the bases' taps flowing during prolonged periods of drought. Extending dark skies rules when warranted would be another show of support for the military community.

On the other hand, I don't believe that expanding the City's impervious cover ordinance beyond the Edwards Aquifer recharge zone would do anything to directly safeguard our military missions. Indeed, in my many years of working with base commanders in San Antonio, I've never heard them advocate for such a sweeping and costly move.

Under existing law, impervious cover such as pavement or concrete is limited to 30 percent of a developed property over the recharge zone. The objective is to protect the Edwards' water quality.

Extending the restriction to the rest of San Antonio would do nothing to meet that objective, but it would drive up the cost of residential, commercial, and industrial construction. That means homebuyers would pay even more for new houses. In addition, concerns about stormwater runoff and flooding are - as they historically have been - best addressed through proper drainage.

For those reasons, I do not support reinserting the impervious cover provision in the Sustainability Plan.

Finally, in responding to my earlier guest column in the Express-News, the City has provided "guesstimates" of some of the costs for the major projects recommended in the plans.  It is clear that these plans will require hundreds of millions of dollars in new spending.  The sources and precise amounts of funding have yet to be identified.  As a result, I have serious concerns about the wisdom of adopting these plans at this time.

Before I vote, however, I want to know what you think of the SA Tomorrow plans. Please contact your District 9 office at 210-207-7325 or District9@sanantonio.gov. 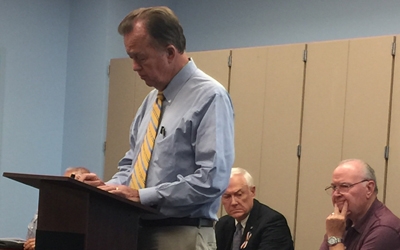