This is a simple story of a Texas state agency not acting for the benefit of Texas residents in carrying out a basic, everyday governmental function.

I found a confusing flaw in the highway signage at the intersection of two toll roads.  In an effort to be a good citizen, I tried to get this corrected.  I ran into roadblocks every step of the way, and there is still no satisfactory resolution.

One Sunday afternoon we were driving back to San Antonio from Dallas. To avoid Austin traffic, we took the toll road (Texas 130 also known as SH 130), starting north of Georgetown.  About 12 miles southeast of Austin, Texas 45 goes west to connect with Interstate 35.  That is the way we had gone before.

On this Sunday, however, there was a new option, with the signage shown in the photo.  Our usual route, Texas 45, went right, and the sign said the road went to Buda.  Straight ahead was a continuation of Texas 130.  As the photo shows, the sign says Texas130 goes to San Antonio.  Thinking this meant a faster route, we followed the San Antonio sign and soon discovered that we were on the new stretch of Texas 130 with the 85 mph speed limit, and were headed to Seguin.

The signs had offered no clue that Texas 130 would take us to Seguin and not San Antonio.  We took the first exit we could, and made our way over to Interstate 35 at San Marcos along country roads.

Believing that TxDOT had somehow made an error in the signage, I contacted them by email in December 2012 to let them know about the flaw.  They responded that the sign language was not an error, and, in fact, that they are required to follow guidance in the manual that the state uses to achieve uniformity in highway signage – the Texas Manual of Uniform Traffic Control Devices.  In brief, even after a series of to and fro emails that allegedly pointed me to the relevant sections, I could not find a requirement that the signage had to be the way it is.  There is room for discretion when guidelines do not fit specific situations.  I suggested that the signage could indicate that one route was to San Antonio via Seguin and I-10, and the other route was to San Antonio via Buda and I-35, but was told Doug Woodall, TxDOT Toll Operations Director, this was not allowable.  It was clear TxDOT was not going to change anything.

I contacted the transportation reporter of the Express-News, and sent her pictures of the signage.  She wrote a front page article on the unexpectedly low use of the new section of Texas 130 on April 5, 2013, but the article did not address the signage.

According to TxDOT and the company's websites, SH130 Concession Co. spent $1.4 billion to build the 41-mile section of Texas 130 that goes from Mustang Ridge to Interstate 10 in Seguin. Today, SH130 Concession Co. manages and operates the section of highway and shares toll revenue with the state under a 50-year lease agreement with TxDOT. SH 130 Concession Co.,  is a joint venture of San Antonio-based Zachry American Infrastructure and Madrid-based Cintra.

Thinking that my elected representatives would take an interest in this constituent issue, I contacted my State Representative and Senator via their websites.  Five attempts over three months to reach State Sen. Donna Campbell, (R-New Braunfels) a strong critic of toll roads, never produced a response, though I suddenly found myself on the email list for “Dr. Donna’s News You Can Use.”

The office of State Rep. Lyle Larson (R-San Antonio) was responsive and made an inquiry to TxDOT.  The response from Phil Wilson, Executive Director, was forwarded to me by Rep. Larson’s office.  It said: “The signage placement was determined based on the end point of each highway. The end point of SH 45 is in the city of Buda; therefore, the sign directing drivers to SH 45 reflects Buda.  Signage to San Antonio is posted because it is the closest city at the southern end point of SH 130.”  Wow! Buda (population 7,295)  is a city, but Seguin (population 26,272) is not? That didn’t make sense.

Wilson’s letter continued: “The placement of these signs is not specific to encourage traffic onto SH 130 or any other highway in question.” And yet,  TxTag has at least two websites where Texas 130 is promoted as “A Better Way Between Austin and San Antonio."

Who is targeted by these 400 signs?  The new section of Texas 130 can make sense if you want to bypass San Antonio going north-south, but not if San Antonio is your destination.

I am not against toll roads. I would be delighted if trucks going to and from South Texas would bypass San Antonio via toll roads

Signage on all toll roads must be approved by TxDOT, and the government agency's job should be to make sure the promotion and marketing is accurate for the benefit of the driving public.

Who benefits from the confusing signage that is the subject of this article?  Certainly not the driving public.

Still, I have been stymied in my solo efforts.  What would happen if each of the readers of this article sent a note to their state representatives?  That would be democracy in action! 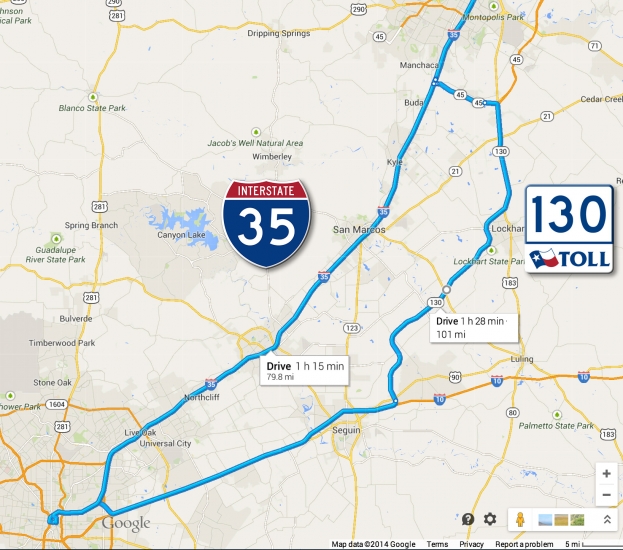