Opinion: What is a Texas Sized Education?

As a participant of the public education system here in Texas, allow me to share you my observations: Our history textbooks described the confederacy in a positive light, our government textbook was from 1999, and our classrooms, on average had anywhere between 30 and 35 students in them. As users of social media, we are no strangers to the grievances and lamentations of public education: “Classrooms are too big” “text books are out of date” “teachers don’t get paid enough” “our football team sucks” but when it comes time to influence the outcome, we, as Texas voters, are silent and allow these injustices in the education system to continue. In this blog, I will summarize to the best of my ability, the current financial situation the Texas public education system is in, and why the 2017 Texas Legislative Session is an extremely important year for the future of Texas Public Education.

Article 7, Sec 1. of the Texas State Constitution: “A general diffusion of knowledge being essential to the preservation of the liberties and rights of the people, it shall be the duty of the Legislature of the State to establish and make suitable provision for the support and maintenance of an efficient system of public free schools.”

Recently, the Texas Supreme Court ruled that although the public education system is broken and needs “top to bottom reform”  it still meets its basic constitutional requirements. Over 600 school districts, and tens of thousands of teachers sued the state for failing to provide “sufficient funds” to maintain an efficient system of public free schools. The school districts argued that the recent pattern of education funding cuts has led to a system that does not meet the requirements outlined in the Texas Constitution and that ultimately, the legislatures way of funding was insufficient. The state argued that money spent does not directly correlate to the quality of education provided nor does it correlate to student achievement, and that the current funding system is able meet the basic outlined requirements. The court’s ruling means that, although the system was found to be terrible, the legislature is not bound legally to change anything about it.  Texas ranks 38th in the nation in per pupil spending, and in 2015 ranked 31st in education quality, and 27th overall. Many other polls and research studies often place Texas in the lowest quartile of States in regards to K-12 education quality. With the exception of schools concentrated in Dallas, most Texas schools pay teachers below the national average.

How did it get this way?

The overarching philosophy of the Texas legislature in past decades has been to keep taxes low and statewide costs to a minimum. As a result, the State has been unable to provide the funding it once did. In 1989 the Texas Supreme Court ruled in Edgewood ISD vs. Kirby that the state’s method of providing funding to the schools was unconstitutional, as a result, Texas adopted the “Robinhood system” in 1993. It was a system in which the richer school districts would give money to the poorer districts in order to provide a more equalized statewide education fund. However, in 2005, the Texas Supreme Court found this method unconstitutional on the grounds that it evolved into a statewide property tax. In attempting to meet the court’s requirement, the legislature lowered the cap of property taxes from 1.50 per 100 dollars of property value, to 1.17 per one hundred dollars of property value, and gave each district their own discretion in setting their own rates. Texas, on average has one of the highest property taxes in the nation, and school districts are basically forced to tax at the highest rates because the funding received from the state does not help to offset the costs. However those increased property taxes are simply not enough to meet the costs of maintaining teacher salaries. When schools don’t have enough money, they can’t hire teachers, when they can’t hire teachers, classrooms get larger, and when classrooms get larger (especially in those crucial elementary years) it becomes more strenuous for teachers to pay attention to the individual needs of their students.

How does this issue affect me?

The issue of education quality affects everyone in the state. Whether or not you have children, whether or not you have completed your education, whether or not you are rich or you are poor, education affects every individual citizen. These kids are the future of our state; future lawyers, future doctors, future engineers. To deny them their right to a proper and well funded education is denying their right to pursue the American Dream. Education is the most powerful tool for any human being to advance themselves in life and by denying our children access to that right, you are effectively denying them a crucial strategic tool for them to avoid poverty. Education is the most important factor when looking at how well a post-industrial society functions.

What if I want to do nothing?

If you as an individual are apathetic towards this issue, there is nothing I can do to sway you. Just know that a person’s apathy in a democratic society removes the checks on elites that have the power to change society for the good or for the better. By not doing anything.

Why is 2017 especially important?

2017 is especially important because the legislature has run out of options to fund our system. There are no more loopholes that they can use to offset the cost, their reformed business and cigarette tax was a failure and did not provide adequate revenue, and their reliance on federal funds does not provide close to enough money. This legislative session, the legislature will have very narrow options for how to deal with this situation: Either increase the cap on property taxes, or find a working solution that coincides with their low tax, low cost philosophy.

What you can do as a Texas Citizen?

The most important thing you can do as a Texas citizen in this upcoming legislative year is to contact your representative and let them know that education funding needs to be a top issue.

Frankie Trynoski is a MOVE San Antonio Fellow for Summer 2016. A senior at The University of Texas at San Antonio, he is currently pursuing a degree in Political Science and Government and serves at Vice President of the Student Government Association. 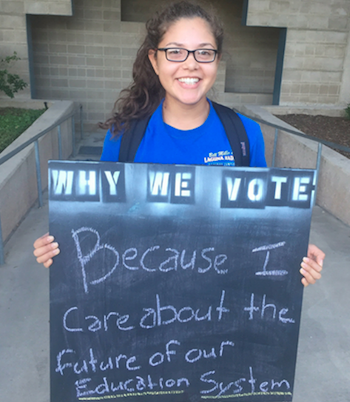