In orderly coup, Government Hill neighbors vote to remove and replace association board

Nearly 50 residents gathered to remove and replace the Government Hill Alliance Board of Directors in a meeting at St. Patrick's Catholic Church that was carefully scripted and orderly.

Organizers said they were motivated by concern over development in the historic neighborhood and a lack of transparency by the previous board.

Watch full video of the meeting here, and scroll down to read more about the meeting.

The April 23, 2018 meeting was chaired by Joe Ashcraft, a former Government Hill Alliance board member and president.

By a vote of 26 to 0 of Alliance members in the audience, the group agreed to remove the current board, including its president, Rose Hill. Hill, who attended the meeting, protested its legitimacy before walking out. (jump directly to her comments here)

By the same margin, the group replaced the 2017 bylaws with the 1988 bylaws and amendments and moved to accept a neighborhood petition as evidence of the neighborhood's opposition to rezoning.

Two San Antonio police officers who had been called in to ensure the peace, spent the time uneventfully in the adjacent kitchen, munching on pretzels and snacks.

Near the conclusion of the meeting, Ashcraft cited Texas statutes which enable association members to reclaim the board and removal of directors. In Chapter 22 of the Business Organizations Code of Nonprofit Corporations, he said the applicable sections were 155 and 211. See the code here: http://www.statutes.legis.state.tx.us/Docs/BO/htm/BO.22.htm 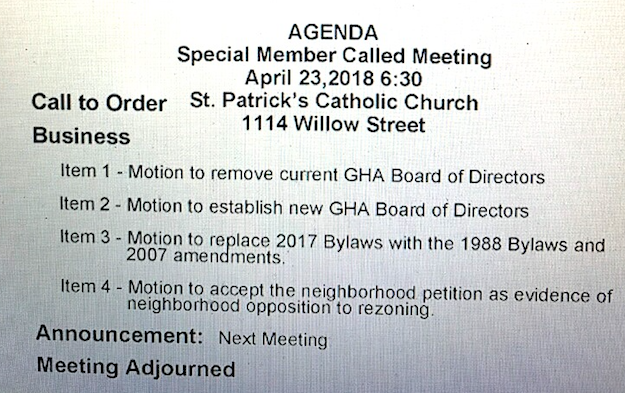