The Parks Community Bond Committee on Monday, Dec. 5, finalized its recommendations toward the city’s planned 2017 bond.

In the end, the City Council-appointed committee settled on about $116 million worth of parks projects without cutting into funds meant for Hemisfair or further shaving money from Hardberger Park’s land bridge proposal.

The videos of the meeting can be watched below in a YouTube playlist.

Park supporters have pledged to raise another $10 million from the private sector toward the project. The streets committee is due to meet next week to consider a proposal to cut into land bridge funding there.

The contingent of District 2 committee representatives wanted to take $2 million more from Hardberger and give it to the Botanical Garden. But committee members said they had a change of heart on some projects after they toured a few project sites on Dec. 3. Committee representatives also recently talked with their respective council members on how best to approach the finalization of recommendations.

“There were some things and opportunities I learned about,” District 2 member Charles English said, referring to Hardberger Park.

“I was struck by the theme of connectivity,” he said, referring to the land bridge idea and the proposed uniting of Lockwood and Dignowity parks on the East Side.

District 7 member Melanie Twail said the park sites on the tour show how each local park is different, and offer a variety of attractions and amenities.

“No one park was completely the same to its neighbor,” she added.

District 5 member Valeria Hernandez agreed the tour was useful, but regretted that it did not venture into the West or South sides of town.

“We really still have needs to address in these (smaller) community parks,” Hernandez said, adding that larger parks such as Hemisfair and Hardberger have the luxury of being leveraged with private money. With that in mind, some members tried to boost more modest proposals in their districts.

The District 6 contingent proposed redirecting $1.5 million from Hemisfair to creating a gated skate park. Member Myrl Britten said the redevelopment of Hemisfair is a worthy initiative, but feels it’s large and notable enough to get the funding it needs from the bond.

City staff has recommended $21 million to develop the civic park portion of Hemisfair, with private sector pledges to leverage the project with additional dollars. But several residents have criticized the proposal, saying $21 million is too much even for Hemisfair, and that smaller park projects around town should get better shares from the bond.

Some of those critics also fear a hotel will be built around the parkland, a claim that city officials have denied. Many of those critics attended Monday’s committee meeting, wearing shirts and toting signs in protest.

Several Hemisfair supporters also attended the meeting, with their own shirts and signs, urging the committee to stick with the $21 million recommendation.

Britten and colleague member Richard Ramos insisted a gated skate park in District 6 would positively affect community youth and deter them from crime and drugs.

“This is an opportunity to do something good for the kids,” Ramos added.

Members from other districts agreed the skate park was ideal. But they felt Hemisfair, with its transformational potential, could greatly impact the city as a whole. A few representatives, added, it felt unfair for Hemisfair to be targeted for defunding.

“I recognize the value and merit of this project,” said District 10 member Marc Whyte. “People from every district make use of this park.”

The committee overwhelmingly voted against the District 6 proposal. Britten did suggest, though, to place the skate park on a final list of priority projects.

District 5 members engaged in some back-and-forth to bolster an originally unfunded project — upgrading and expanding the softball complex at Normoyle Park.

That way, the San Antonio Seniors Softball League, which boasts hundreds of players and hosts many tournaments, can make better use of the facilities.

The committee approved District 5’s proposal to redistribute $250,000 from a zoo parking garage and $650,000 from Normoyle Park itself to the softball complex.

The bond proposal for the parking garage envisions a three-story with a total of 600 spaces. Mike Frisbie, director of the city’s Transportation and Capital Improvements Department, said a $250,000 cut would slightly reduce the project’s scope.

Here, some committee members, especially those in District 2, insisted the botanical garden was deserving of its recommended allocation of $7 million.

The city money would leverage private funds to further develop the garden based on the facility’s master plan, including expanding the garden’s event hosting capabilities.

Xavier Urrutia, Parks and Recreation director, said a serious funding cut would jeopardize the city’s portion of the project. Hernandez said shuffling money around seemed like the best option to help districts such as hers to increase funding for smaller projects.

English kept reiterating that District 2 City Councilman Alan Warrick urged his contingent to “stay in their lane,” meaning focus only on projects in their district. He added that the botanical garden project was not to be taken lightly.

“This isn’t window dressing, there are serious issues with capacity,” he said. The committee voted down this District 5 proposal.

Following further discussion that some districts were focusing on others for redistribution, a couple of districts - later in the meeting - were in the giving mood. The committee approved the District 4 contingent’s proposal to redirect $100,000 from one of its projects to the Normoyle softball complex.

District 1 contingent redirected $1.475 million total from La Villita and upgrades at McFarlin Tennis Center, as well as $150,000 from a combo downtown parks package toward the Normoyle complex.

The committee did approve a District 3 proposal to reallocate $800,000 from sports fields at Brooks City-Base and $400,000 from the World Heritage site to three smaller projects within the district.

City staff originally recommended $2.8 million as leverage in a partnership with the University of the Incarnate Word to develop a sports complex at Brooks.

The city also initially recommended $2.5 million for park improvements and land acquisition in the World Heritage area, including some upgrades at Concepcion and Stinson parks.

The council is set on Feb. 9 to formally call for a public vote on the $850 million total bond. Election Day would be May 6. 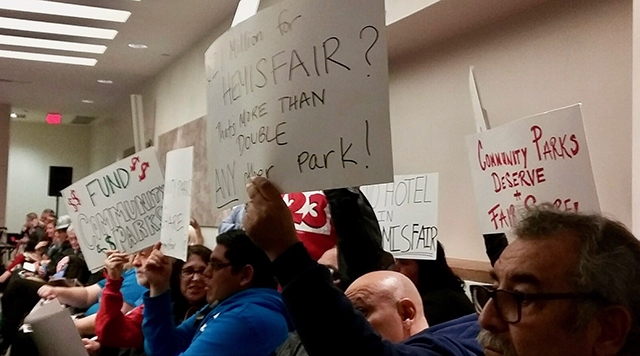