The citizen committees studying San Antonio's planned 2017 bond are more than halfway through their work. Members of the parks and recreation committee, though, are offering varying opinions that reflect a growing number of residents who hope to get more attention for smaller, less visible projects citywide.

But recently, some residents and committee members have questioned the costs and needs for those big-ticket projects. (Read more about the Nov. 2 parks committee meeting, when such questions and criticisms arose.

You can also view NOWCastSA's video of the meeting below:

It could be the first of many committee recommendations to redistribute significant monies from larger to smaller parks and recreational elements.

Meanwhile, more and more residents from almost every City Council district have taken pains to either support a city staff-recommended smaller project or pitch an entirely new project for the committee's consideration.

Amber Garza has been present at many bond committee meetings. On Nov. 2, the District 5 resident said the originally proposed $21 million to help Hemisfair's redevelopment, and the initially combined $15 million that could go toward a Hardberger Park landbridge, are too high. She suggested the city's funding for both projects, which involve private sector leveraging, could be reduced to help support less notable projects elsewhere.

But some street committee members such as District 6's Oscar Rosalez, District 5's Raymond Garza, and District's 7 Bianca Maldonado have asked whether the landbridge is more about showcasing Hardberger Park and saving wildlife than protecting human visitors or reducing on-site vehicular parking.

Meanwhile, a group called Unite Here attended the Nov. 16 parks committee session, asking the city not to subsidize a hotel on new greenspace at the new Hemisfair Civic Park. The Hemisfair redevelopment master plan does allow for retail and office space and possibly a hotel near the greenspace area.

Andres Andujar, Hemisfair Park Area Redevelopment Corp. CEO, said a hotel would not be built on designated parkland, and that bond money would not support private development.

Still, an expanding number of members and residents attending parks and street committee meetings also question whether these big-ticket items should come at a cost of more basic needs, such as roads, drainage and sidewalks, especially in older inner city neighborhoods.

Another point of contention, particularly among the parks and streets committees, has been about the effectiveness of the city's attempt at "rough proportionality" in planning the 2017 bond proposals.

It's a strategy where the city adds up the monetary amounts of bond projects and related funds in the current general operating budget (i.e. parks, streets), per council district. The city then aims for a roughly equal total investment among the districts in each bond category.

On Dec. 5, the parks committee will vote on proposals to redistribute millions more from Hardberger, Hemisfair, the planned Classen-Steubing Ranch park in Stone Oak, and at least $1 million from San Antonio Botanical Garden, toward inner-city projects.

The City Council is scheduled to meet in January and consider recommendations from all resident committees on the final $850 million bond package, which would be floated in May.

Readers can also view the citizen comments from the Nov. 2 meeting below:

*Jane Dubel and her husband Bill promoted improvements at her namesake park (formerly Thunderbird Hills) in District 7. The park currently has 10 marked parking spaces, and more than double the number of cars can be often found around the park.

The Dubels called for more paved parking space, moving the current portable bathroom, cleaning up overgrowth at the park, more tables, and a softball diamond. Dubel and Gilbert Garza Park are part of a $500,000 District 7 parks package.

*$3.1 million in improvements at Lockwood and Dignowity parks, including a unification of the two parks by closing Burnet Street.

These Eastside parks have become more popular in use lately, having hosted major events such as this year’s Luminaria Contemporary Arts Festival and the San Antonio Beer Festival this year.

*$2.8 million to develop a sports complex at Brooks City-Base, operated by the University of the Incarnate Word.

*$2.5 million for the World Heritage Missions site, including improvements, land acquisition, and projects at Concepcion and Stinson parks.

*$400,000 in improvements for Mud Creek Park, a pocket park in District 10. But resident Michelle Stewart requested more upgrades on Nov. 2.

She said some people use the park, which is part of a natural area, to poach deer. ATV tracks have also been found around the park. Other park users have found graffiti there.

Stewart said she hopes the committee and the council will increase funding at Mud Creek Park to support a small dog park, water fountains, and to shore up overall safety.

Then there are 16 unfunded parks projects that city staff did not recommend early on, but they are now under committee review, including:

*$4.5 million to finish Phase 2 of Mission YMCA, a 2012 bond project that will give the Southside its first YMCA facility by early 2017.

*$2 million for roadway improvements in John James Park to better serve visitors to this Eastside park, and to provide more access to schools at Joint Base San Antonio-Fort Sam Houston. The Fort Sam Houston Independent School District has pledged $150,000 in design fees.

*$4 million for a gated skate park in District 6.

$2 million more in McAllister improvements as requested by the group Friends of McAllister Park.

The current total list of unfunded parks and recreation projects can be viewed here. 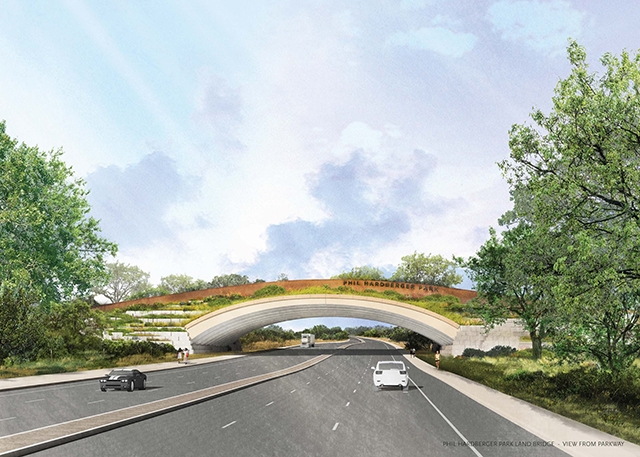