Members of a COPS/Metro Alliance "action team" are unsure how to take on part of the city's planned 2017 bond that could dedicate $20 million toward affordable housing.

The local grassroots coalition, which has traditionally endorsed previous city bond issues, is preparing ways of addressing $850 million worth of proposals. Five appointed citizen committees are close to wrapping up their reviews and recommendations of proposals in five categories: streets, drainage, facilities, parks, and neighborhood improvements.

Neighborhood improvements is a new bonding category. If approved by voters, the city's urban renewal agency, OUR SA, would use the $20 million to acquire several select properties in distress citywide. The money would be used to prepare the land, including razing existing non-historic structures, environmental remediation, and adding utilities to support new development. The properties then would be sold to developers for mixed-use development, mixed-income housing and affordable housing.

City officials have said that bonding is the route to go because the city charter does not allow issuance of general obligation bonds for housing.

"This is a little problematic for the city because they've been wanting to do something for affordable housing," said Mike Philips, chairman of COPS/Metro Alliance bond action team. Philips and 11 fellow coalition members and other interested residents met Monday, Nov. 29 for an action team meeting at the COPS/Metro Office (1511 Saltillo Street).

Philips and a few other attendees at the meeting agreed that, while it is no small task, revising the city charter would be in the city's long-term best interest in dealing with such issues as spending public money on housing. However, the more immediate issue regards concerns about how the neighborhood improvements portion of the bond will finally look like before voters consider proposals in May.

The Neighborhood Improvements Bond Committee on Nov. 17 took several areas from the city staff's list of recommended targeted properties. The committee, which has been meeting since October, has had only the $20 million available for their category. It means if committee members or residents have expressed a need to consider another area or two, one or two originally recommended properties would face elimination.

Based on an online survey of committee members, the committee took out their following lower ranked areas: Blanco Road and West Avenue, the former Malibu Castle site at Interstate 10 and Loop 410, Naco-Perrin Boulevard and Perrin-Beitel Road, and a former fire academy site on Zarzamora Street. Committee members were worried that the final site, Zarzamora, would need $3 million for clean-up.

Based on committee and community input, city staff has added lland at Culebra and Callaghan roads to the list for committee consideration. Four areas originally recommended by city staff as most viable for redevelopment are Five Points (Flores Street and Fredericksburg Road), the Lincoln Park-Arena District, the West Side, and the near East Side.

One concern that has prevailed for the Neighborhood Improvements Committee, and for potentially affected neighbors, is that the city has not fully engaged residents in the targeted areas. Philips said he has heard from Five Points residents that they did not hear much of anything from the city before staff made its recommendations.

The city is holding meetings this week to get input from neighborhood associations about areas targeted for the neighborhood improvements part of the bond. The first meeting will be held Tuesday, Nov. 29, at the Pre-K 4 SA East center, 5230 Eisenhauer Road. The second will be held Wednesday, Nov. 30, at the Pre-K 4 SA West center, 1235 Enrique Barrera Memorial Parkway. Both meetings begin at 6 p.m.

The Neighborhood Improvements Committee has also discussed forming some kind of task force to help ensure projects related to approved housing bond money are completed correctly and in accordance with surrounding neighborhood plans and wishes. Members of the COPS/Metro Alliance bond action team echoed that sentiment, that there should be an oversight committee.

Philips said he thinks his organization may implement its own housing task force, adding that such a group would at least help communicate issues from existing neighborhoods. Philips said many associations were critical of how the city addressed neighborhoods within its SA Tomorrow comprehensive plan.

"Neighborhood associations are disrespected either way. Our neighborhood plan (Ingram Hills) was walked on all over," he added.

Attendee Joseph Oubre said an oversight committee means such a group would be formed after the City Council considers final proposals, and after voters have had their say at the polls. He urged the coalition and any other residents to be vocal and proactive before bond committees make their final recommendations and before the bond election.

"You've got to get in on the ground floor with that," he added.

Some attendees of the action team meeting said some kind of housing relief is necessary. City staff has said neither eminent domain nor displacment would be used on any of the targed properties.

"We certainly need some kind of development on the Westside because it's just getting worse," said Maria Tijerina.

Gabriel Gonzales noted that redevelopment may bring new value to a struggling neighborhood, but that poses the risks of higher appraisals, higher taxes, and, as attendee Rebecca Flores pointed out, gentrification.

Flores criticized how parts of downtown and Southtown have redeveloped in recent years, adding that many longtime residents have been "pushed out" by the new growth.

"Talk about overbuilding and overbuilding. Along with that, we're getting overpriced," Flores said, referring to more traffic and higher prices at former recreational hangouts in Southtown.

The Neighborhood Improvements Bond Committee next meets at 6 p.m. Dec. 8 at the Central Library. Action team members said they are confident they will reach a consensus on all five bond categories once all committees have finalized their lists of recommendations.

COPS/Metro Alliance leaders are slated to next meet Dec. 5. 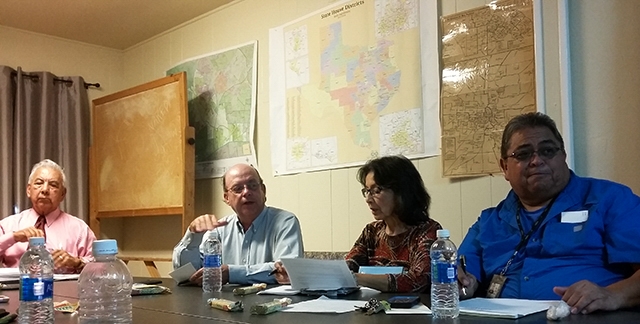