The Alamo City will be treated to a melting pot of international music when Musical Bridges Around the World presents its fourth International Music Festival from Feb. 12-26 at the Tobin Center, Empire Theatre and Southwest School of Art.  The festival reaches more than 100,000 people annually.

Performing artists from Indonesia, Cuba, Argentina, Spain, Armenia and Canada will be represented in eight concerts, including a special performance by Grammy-nominated, jazz player Joey Alexander on Feb. 18 at the Empire Theater.

“The purpose of the music festival is to bring world-class artists to San Antonio in performances designed to unite audiences, one concert at a time, by highlighting cultural diversity,” said Anya Grokhovski, Musical Brides Around the World artistic director and CEO.

Although the performances are free and admission is on a first-come, first-serve basis, patrons can reserve seating for $60 for five concerts or $100 for eight concerts. For more information, visit www.mbaw.org or call (210) 464-1534.

• Valentine Special, Tuesday, Feb. 14, 7:30 p.m., Chapel of the Southwest School of Art: You will be treated to a romantic evening with the jazz trio led by accordion master Victor Prieto from Galicia, Spain.

• One Woman Show, Thursday, Feb. 16, 7:30 p.m., Chapel of the Southwest School of Art: With her cello and computer-based technology, Zoe Keating, dubbed by music critics as a one-woman orchestra, creates a fantastic musical world that embraces the audience into one being.

• Joey Alexander Trio, Saturday, Feb. 18, 7:30 p.m., Empire Theatre: Anderson Cooper of “60 Minutes and CNN, has called the young Alexander the “eighth wonder of the world. Since he arrived in New York 18 months ago, Joey has been captivating fans and fellow musicians alike, and after you meet him… we think you’ll understand why.”

Musical Bridges Around the World is a nonprofit organization whose mission is to unite, educate and inspire through world-class, culturally diverse programming to benefit the public and at-risk youth, while fostering San Antonio’s reputation as a cosmopolitan cultural center. 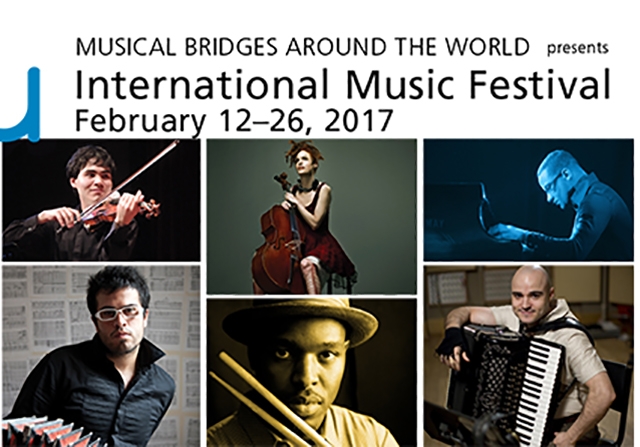