I started a petition to rename San Antonio's Robert E. Lee High School in 2015 after seeing the suggestion by former Mayor Juliån Castro on his Facebook page. (This article in the San Antonio Current details what Castro wrote.)

Below are videos of my interview about the petition with NOWCastSA's Managing Director, Charlotte-Anne Lucas and of a conversation I had about the issue with San Antonio District 1 City Councilman Roberto Treviño, who lives down the street from Lee High School. Scroll down to read the petition and get links to more information.

Here is a link to the petition. Stories about the petition drive have been featured on KSAT news, the San Antonio Express-New  and the Washington Post.

Here is what I wrote in the petition, with some additions, including links to more information:

Robert E. Lee High School in San Antonio is named after a Confederate general who not only fought to preserve the enslavement of human beings but fought against the United States.

We often forget that the Confederacy was an act of treason, an act of betrayal.

Therefore, in no way is the naming of the school "patriotic.”

Robert E. Lee owned slaves himself and fought greatly to keep them. Had he won the Civil War, the owning, selling, raping and lynching of black people would have prevailed. Such a thing should not be honored.

In the wake of the Charleston shooting, where a racist man killed nine people in a black church, people have called for the removal of the Confederate flag from the South Carolina capitol grounds. (That flag was removed on July 10, 2015, as shown in this ABC video.)

The Confederate flag still remains embedded in the courtyard of Lee High School. The flag represents decades of hate and racism. So any affiliation to do with Robert E. Lee and Confederacy should be removed as well.

Although we can not erase our past, we must not celebrate parts of our past that were most treacherous. Continuing to honor Robert E. Lee by naming the school for him is doing just that. (Click here to see the school’s history and alma mater celebrating Robert E. Lee.)This school is far overdue for a name change.

This is not the only time a school name has been changed. A middle school in San Antonio that once was named for Jefferson Davis,  President of the Confederate States of America, was renamed to honor Stonewall Jackson Davis, a prominent black civic leader in San Antonio.

Just changing the first name of the school made the transition easier.

So I propose replacing Robert E. Lee’s name with someone like George W. Lee, a civil rights activist. George W. Lee was the first black person to register to vote in Humphreys County, Mississippi, and he was assassinated after refusing to remove his name from the voting rolls. More information about him here  and here. )

A spokeswoman for North East Independent School District said administrators and the board have refused to consider changing the name because there have been "no complaints.” (More from the spokeswoman in this KSAT video.)

Please sign and help try to make a change to this name.

The confederate flag that is paved into the school's courtyard can be seen on the petition here. 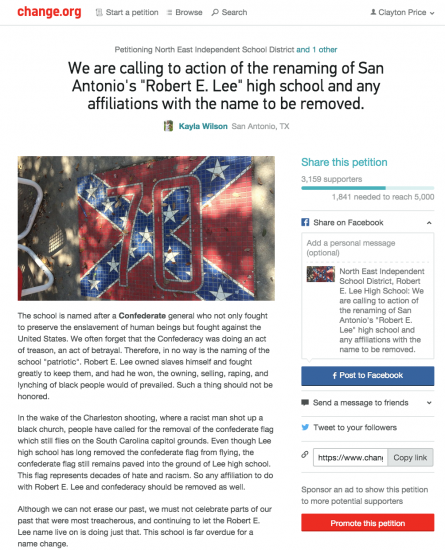