At its first open public meeting, members of the Mayor's Council on Police-Community Relations listed goals including better two-way communication between police and neighborhoods, urging the San Antonio Police Department to hire more women and people of color and moving the council’s meetings into the community and away from government offices that could intimidate participants.

The Dec. 12 meeting was the group’s fourth gathering since it was created by San Antonio Mayor Ivy Taylor in response to shootings of unarmed people of color by police. The Council includes local activists, political, law enforcement and community leaders.

The council got off to a rocky start when the public and the media were excluded from its initial meetings. Taylor said at the time the closed-door meetings were to enable more candid discussion.

The Dec. 12 meeting was live streamed from City Hall. Replay the video here:

Michael Gilbert, an associate professor from the University of Texas at San Antonio’s College of Public Policy, facilitate discussion for members of the council, leading them in group exercises on topics such as recruitment, training and collaboration.

"We’ve made progress,” Gilbert said. “This meeting is about clarifying what we need to do.’

Gilbert said everyone - police and community members - must feel comfortable and inspired to address each other’s concerns in order to build mutually beneficial relationships. That, in turn, results in credibility and trust — important factors in any relationship, he added.

One work group recommended that police develop a two-way response system, to quickly disseminate information, especially if it’s a sensitive issue affecting a specific community. The same group also suggested ways for residents to more easily access police information that is available to them, and in a timely manner.

Activist Johnathan-David Jones said his group wants the police department to do a better job at recruiting more people of color and women if the police force is reflect the overall city it serves.

Jones suggested enhancing incentives, such as possible school loan forgiveness and scholarships to attract a wider pool of prospects. Jones said he felt San Antonio police works hard at attracting recruits from suburbs and beyond.

“If we’re going to invest money to bring people from outside in, why don’t we focus on people already in the city,” Jones said.

He urged the city to have more public meetings on police/community relations elsewhere, like in churches, parks and community centers.

Boyce also encouraged more cultural sensitivity training for police. He said some officers tend to paint a community with a broad brush based on the actions of a few bad apples, or on perceived stereotypes.

“Sometimes officers will judge a community just what happens on one street,” Boyce said. He also said police should be more sensitive to different ways people speak and act.

“We can be from different races, but we can be culturally the same,” he added.

Martin Henderson of Fatherhood Matters echoed Boyce’s concerns from a fourth group. He implored police to be culturally competent and realize that not everybody is expected to talk or behave in the same way in any interaction.

“They need to understand I speak with my hands, but that doesn’t mean I’m about to strike,” Henderson said.

He also suggested that civilians could benefit from some type of training where they can better understand what police face on a daily basis. He said more ride-alongs could help. So could community leaders teaching youths about respecting authority, he added.

“How do they decompress?” he added.

A few audience members chimed in during the listening portion of the meeting. Author/journalist Denise McVea said she has experienced or witnessed dozens of negative interactions with police. She explained some police officers told her that if she desires safety, she should not have moved to her Eastside neighborhood.

McVea siad she has spent time pulling police records to research crime data from her community. She said some records she received were “grossly deficient.” McVea implored the SAPD to fix its data collection and record-keeping processes to enhance transparency. Community member Miguel Castillo suggested the police union continues to undermine efforts toward transparency.

“Until the day comes that we can limit the power to influence authority, we’ll continue to have mistrust,” Castillo added.

Kim Anderson, director of the nonprofit Gifts of Love from Above, asked about how the next session of the Texas Legislature could impact gun control laws. Taylor said the city should be able to address that issue soon.

Will McLeod said there should be greater emphasis on how mental health issues affect crime. He said police seem to not enforce some ordinances, such as those banning texting while driving.

Police Chief William McManus said the city and Bexar County have been noted as models for law addressing mental health. (This article in the Boston Globe cites San Antonio as a national model for dealing with mental health.) And he said his officers have written "thousands of tickets" for texting while driving.

Taylor said she looks forward to council members going out into the community and sharing what the group has discussed so far. 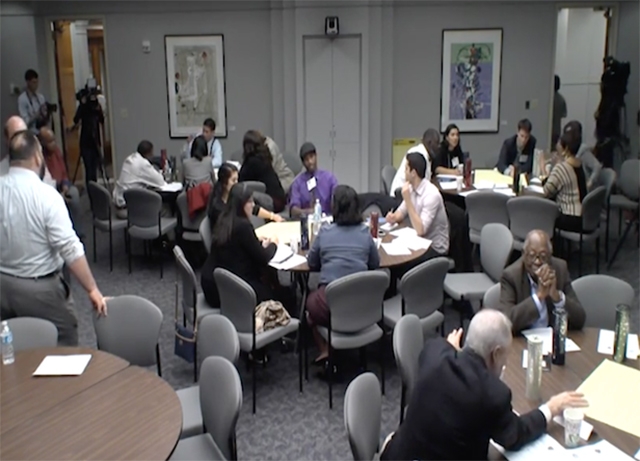