Pookie's Story: What is Chagas Disease?

Pookie is a Chihuahua that belongs to my daughter Morgan. He means the world to her and to the rest of our family.  On Saturday, April 5 at 10 a.m. Pookie had a seizure. He cried out - I thought he was dying. I immediately yelled out to Morgan and my husband, Chuck to rush him to our veterinarian, Dr. Sloan.

Dr. Sloan gave him Valium and did some x-rays. Because it was the weekend and there is not 24-hour monitoring at our vet’s clinic, we agreed to take him to Mission Specialists where Dr. Finklestein examined him and ran some tests. She saw that his heart was enlarged and sent his x-rays to a cardiologist for evaluation.

A few hours later we received a call that we needed to pick Pookie up and take him to Texas A&M University (TAMU) to have emergency pacemaker surgery.  We got there about 9:30 p.m. and met with Dr. Jugan and later Dr. Winter, Pookie’s cardiologist. While they were doing an echocardiogram, his heart stopped beating for several seconds, and Pookie needed surgery or he would not make it through the night. They started the surgery close to midnight, and at around 3:00 a.m. we learned that the surgery was a success.  We saw Pookie in the morning, and he was doing great. We decided to leave him another night for monitoring. We are extremely grateful to Dr. Winter and the rest of the staff for saving Pookie’s life that night.

Two weeks after Pookie had his pacemaker put in we got the test results back that he was positive for Chagas disease, a parasitic infection of the parasite Trypanosoma cruzi spread by an insect called Triatominae, also known as a Chagas bug or kissing bug.  I am writing in hopes to make everyone aware of this bug and this disease.

The Chagas bug has moved from South America through Mexico and is now in the southern United States. While transmission to humans in the U.S. is still rare, the CDC considers Chagas disease a neglected parasitic infection (NPI), one of five parasitic diseases that have been targeted by CDC for public health action. Not all bugs carry the parasite but it is not worth taking a chance.

Dogs can be infected by the bug directly (by ingesting the bug or its feces), by eating feces from an animal infected with the parasite, or congenitally (transmitted from mother to pup). The bugs come out at night and are attracted to the carbon dioxide mammals, birds and reptiles exhale when they breathe. The bug itself is a parasite that drinks blood.  The actual parasite that causes Chagas disease is passed along through the bug’s feces when an infected insect defecates in the mouth or an open wound.

In Pookie's case the disease affected his heart. It can also affect the liver, kidneys or intestinal track. Chagas is still relatively new to our area so many pet owners and their veterinarians do not know about the disease. Symptoms may be mistaken for more common illnesses and care providers may not even consider testing for it.

There are 10 million people affected by this disease in the world. Humans may not shows signs of carrying this disease for 10 to 20 years after being bit. There is currently no cure for Chagas disease.

Pookie is doing fantastic.  We took him back up to TAMU on Monday for an echocardiogram and retested his blood, and he is doing well.  Since learning about this disease, we have had our four other dogs tested for Chagas: Two more have come back positive, though they have not yet shown any symptoms of the disease.

This is a photo of a Chagas bug that was found under our couch in our house. I kept this bug alive and took it to a researcher at TAMU for further testing. The Texas Department of State Health Services, in conjunction with the CDC and TAMU, provides testing of Triatomine bugs for T. cruzi parasite for free for Texas residents, and you can click here for more information.

Spotted a Chagas bug in your home? The CDC recommends you do not touch or squish the bugs. Surfaces that have come into contact with the bug should be cleaned with a solution made of 1 part bleach to 9 parts water (or 7 parts ethanol to 3 parts water).

Keeping the bugs away from your home and pets is the best way to prevent Chagas disease. According to the CDC, roach hotels or other "bait" formulations do not work against Chagas bugs, but long lasting insecticide treated bednets and curtains have been shown to kill them. Synthetic pyrethroid sprays have been used successfully in Latin America to eliminate house infestations, and a licensed pest control operator should be consulted if considering the use of insecticides.

Other precautions to prevent house infestation include:

Infestation of homes in the U.S. is rare and may be associated with rodent infestations, so keeping mice and rats under control can help prevent the bugs from moving inside. Chagas bugs may be found in or around chicken coops or houses, as the bugs do feed on the birds; however, chickens are not affected by Chagas disease.  Cats can also be carriers of the parasite, but do not show any symptoms of the disease. 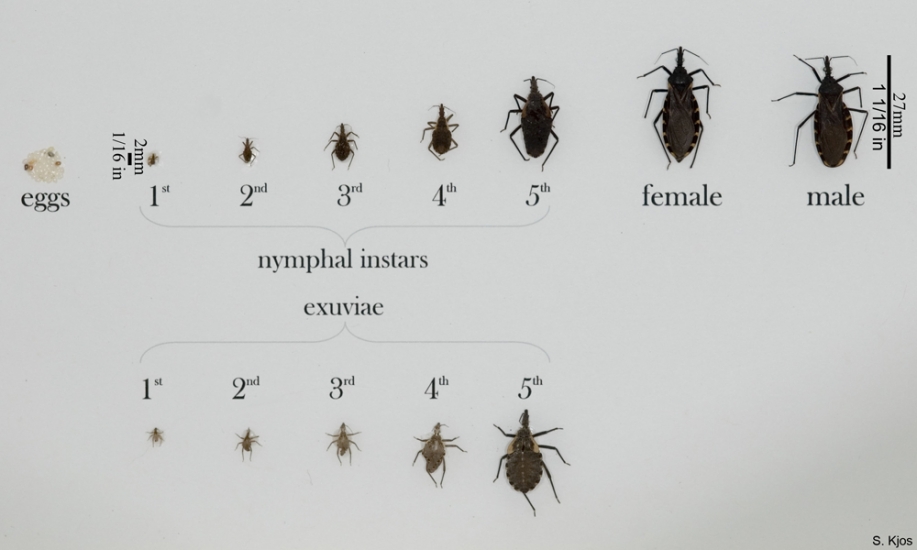