Elected local leaders and other community members gathered Saturday morning on the near West Side to launch a campaign on behalf of the city's proposed $850 million bond issue.

The pro-bond group, called OneSA, is led by longtime local political strategist Christian Archer and is made up of a variety of civic leaders and other residents. Backers say the bond, the largest in San Antonio's history, would a major investment in the basics -- a boost for infrastructure, transportation, facilities and quality of life.

If approved by voters May 6, the bond would be funded by savings the city has accrued from its handling of voter-approved bonds in 2007 and 2012. No property tax rate increase is scheduled as part of this proposal.

"We come to celebrate and kick off the largest and most important investment in our infrastructure," Mayor Ivy Taylor said. "Because of the investments made in the last two bond cycles, we are able to build on that legacy without a tax (rate) increase and without jeopardizing our AAA bond rating. We are the only big city that can boast about such a feat."

The OneSA launch took place on West Mistletoe, where work on the Seeling Channel project is taking place. It's a large multi-year, multi-phase project designed to allieviate major drainage problems near Woodlawn Lake Park and take more than 200 homes out of the area's floodplain. Neighborhoods there experienced flooding issues during the historic rainfall events of 1998 and 2002.

Aurora Garza, her husband Hector and their family live off Mistletoe. They recalled seeing cars float in the ditch in major flooding, and seeing children or animais explore the ditch in other times. The Garzas support the 2017 bond issue, with Aurora saying it makes sense to spend money to ensure public safety. She praised the work being done on the Seeling Channel.

"There has been a big development of improvement in the area over the years," Aurora Garza said. "Having the bonds voted on is important because it’s very important to the families, to the children, for safety. There’s too many risks involved."

The council approved the final list of projects earlier in January. San Antonio voters on May 6 not only will consider the bond, but also the mayor's race and council elections.

The bond involves $445 million in 64 street, bridge and sidewalk projects citywide. That's the largest category, or portion, of the overall bond issue. If the bond were approved, the city could commit to more than 200 miles of sidewalk construction, be it new and filling of gaps. The city will leverage an additional $350 million in outside funding on select projects.

"This bond impacts every district and covers a variety of projects that we are proud of," Taylor said. "It is imperative that our community come together and vote for this vital investment in our infrastructure."

Retired Gen. Joe Robles, former CEO of USAA, is chairing the OneSA initiative, which is taking contributions. OneSA is acting independent of the city, as the city by law cannot officially advocate for or against the bond, only provide factual information about it.

Robles echoed Taylor and Garza's comments, that it's vital to continue investing in a growing city such as San Antonio, which expects to see an additional 1 million people by 2040.

"You have to make an investment in anything that’s growing. This investment we want to make adds value to the previous bond campaigns of 2007 and 2012," Robles said. "I think this will be a great opportunity to continue to get the city pointed in the right direction."

Robles said the city continues to attract a wider variety of people, professionals, including millennials who are interested in certain ammenities that regard quality of life, transportation and business opportunities.

"They’re younger and they have different motivated, but they care, they really care," he added.

The city would ready those properties for resale to the right developer who would commit to building affordable housing, under specific criteria, on the property. Backers have said this could help to reduce or prevent future cases of gentrification in San Antonio. But groups such as COPS/Metro Alliance have voiced concern that it either would not do enough to provide affordable housing or that it's misdirected in some ways.

Taylor and others at the OneSA launch urged all residents to educate themselves about the bond via the city's website, OneSA's website, or OneSA through various social media platforms.

It is not enough known yet whether which, if any, organizations will facilitate public information meetings about the bond prior to early voting. Media outlets such as NowCastSA reported on some community concerns not only about the housing bond, but about other proposed projects, such as a landbridge to link the two sides of Hardberger Park, and a $21 million allocation to the redevelopment of Hemisfair.

Organizations suppporting the bond with OneSA will be revealed, over time this winter and spring, via OneSA's online platforms, which can also be seen on their website.

**Cover Image: A young woman stands in the crowd for the presentation of the OneSA launch. Photo by Edmond Ortiz. 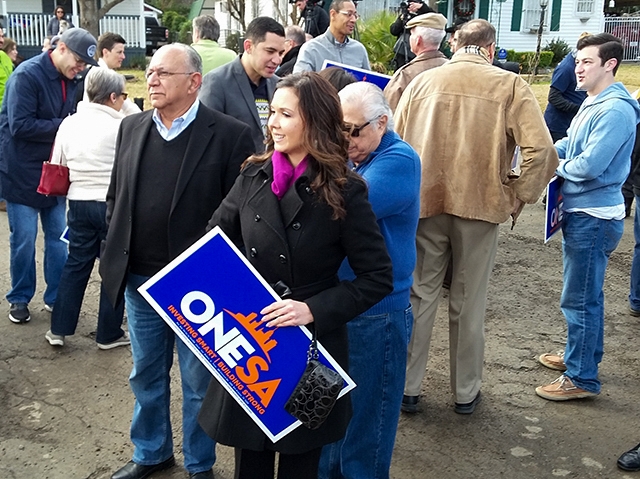