A June 24, 2015 Congressional visit investigating conditions for refugee families in private prisons in Texas culminated with a protest by dozens of women calling out in Spanish for freedom, chanting ¡Libertad! 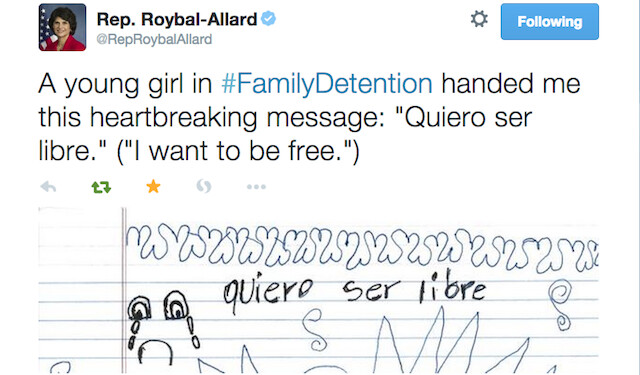 U.S. Rep. Lucille Roybal-Allard of California Tweeted out an image of a message she received from a young girl during the tour: "Quiero ser libre." ("I want to be free.")

From Washington D.C. the next day, she Tweeted: "Haunted by the condition & forlorn faces of women & kids at the #Karnes & #Dilley #FamilyDetention facilities in TX." The Twitter included a slideshow of photos of women and children at what another lawmaker characterized as "prison camps."

One lawmaker shot cellphone video of the protest inside the private prison in Dilley, Texas that shows the women holding hand-made signs and banners pleading for freedom.

The eight Congressional Democrats came to Texas on Monday, June 22 and Tuesday, June 23 for a first-hand look at private prisons in Karnes City and Dilley, Texas, where asylum-seeking Central American women and their children are being held.

Hosted on the trip by Rep. Joaquin Castro of San Antonio, the group included Rep. Judy Chu, of California, Rep. Raúl M. Grijalva of Arizona, Rep. Luis V. Gutiérrez of Illinois, Rep. Sheila Jackson Lee of Houston, Rep. Zoe Lofgren of California and Rep. Lucille Roybal-Allard of California and House Minority Whip Steny Hoyer of Maryland. They are among the 136 House Democrats who signed a letter to Department of Homeland Security Secretary Jeh Johnson calling for an end to family detention that is "detrimental to mothers and children ." (full text here)

On Monday the lawmakers visited the private prison in Karnes City and learned a 4-year-old child had been imprisoned with his mother for a year.

NOWCastSA produced a short documentary on conditions at Karnes, where asylum-seeking women who fled violence in Honduras, Guatemala and El Salvador said they were threatened and punished for holding a hunger strike to bring attention to their plight. (click here to see that video)

"It was a very emotional visit for me," Castro said at the news conference. Rather than being in prison, he said, the said, the families should be connected with organizations including the San Antonio-based Interfaith Welcome Coalition who have offered to host refugees and help connect them with family and sponsors in the U.S.

Lofgren is the ranking member of the House Judiciary subcommittee on Immigration and Border Security, on which Gutierrez and Jackson Lee also serve. "What I saw today did nothing but confirm my belief walking through the door that we should end the jailing of these women and children" she said at the news conference. "We’re not gonna quit until these detention centers are closed. We’re not going to quit."

Recent reports show that the private companies GEO Group, which operates Karnes, and Corrections Corporation of America, which operates Dilley, have guaranteed bed quotas at the facilities.

Gutierrez said the government is paying the private prison companies "$127,000 a year (per person) to keep these people in jail."

Grijalva said the question is "who is driving the policy," of putting asylum-seeking women and children in detention. "if the private prison industry is driving the decision of who gets in and who gets out," he said, "then I think we have a substantive issue."

Jackson Lee was direct. "I believe - not conspicuously or openly - that the private prison system drives these numbers. These are contracts with the federal government," she said. "I am not against people’s jobs, but I do believe that the economic aspect of private prisons should not drive the humanitarian needs of women who are seeking asylum and are seeking refuge."

The lawmakers said they left business cards with the women and would follow up with them on a conference call next week. Hoyer praised the women for "showing the courage to come forward to tell us their plight, their fears and their aspirations." Jeh Johnson, Secretary of Department of Homeland Security - who visited Karnes last week - "would not countenance in any way any retribution for these women," Hoyer said, adding, "these women needed to be treated with the humanity that America projects itself to be." 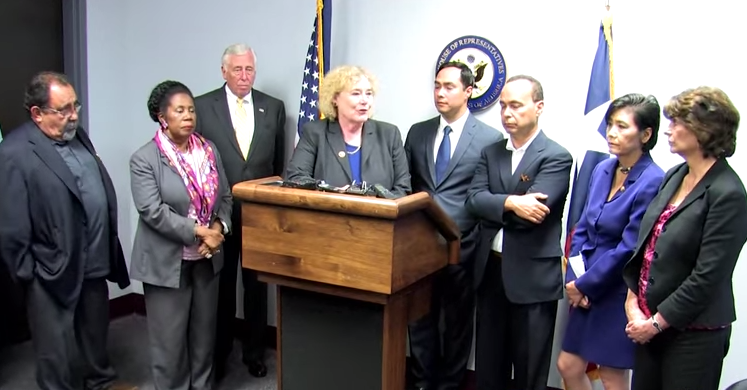