Immigration officials arrested an El Paso woman who alleged she was a victim of domestic abuse, according to multiple reports.

And the tip that got her arrested may have come from her alleged abuser, according to the El Paso Times.

The Times story also noted that a criminal complaint filed in district court indicated that someone with the same name as the alleged victim might have a history of deportation and domestic violence.

Officials are alarmed the case will scare undocumented immigrants from reporting crimes to police and that undocumented victims of abuse will stay in abuse.

“Our clients come to us at the lowest point in their lives,” El Paso County Attorney Jo Anne Bernal told the El Paso Times. “Many of them are so frightened of coming to us because of possible immigration concerns.”

Last week, ICE launched a "targeted operation" to detain several hundred undocumented immigrants across the country. An official told The Texas Tribune this past weekend that officers were looking for people who had committed crimes or did not honor a previous deportation order.

But in at least one Texas instance, an undocumented immigrant was arrested in Central Texas last week in what may be a case of mistaken identity.

This article originally appeared in The Texas Tribune at https://www.texastribune.org/2017/02/16/reports-ice-officials-arrest-alleged-victim-domestic-violence-texas.

**Cover Image: Protesters display signs from a rally in a terminal of the San Antonio Internation Airport. Photo by B. Kay Richter. 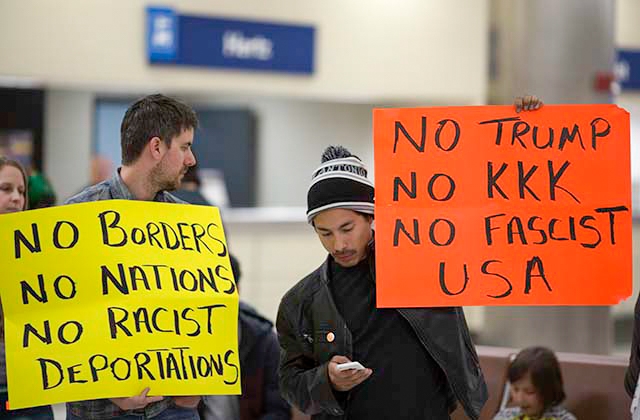