A Ripple of Hope for a Racially Divided Country

As my husband and I headed back home to San Antonio from a wedding in St. Paul,  I insisted we stop at the Brown v Board of Education historic site in Little Rock, Arkansas at Central High School.

And then, in Indianapolis, dear Indianapolis -- where we had both been separately stationed at an Army school at Ft. Ben Harrison, in Nap-town, Indian-no-place - we made a pilgrimage to Broadway and 17th Street to pay tribute to Bobby Kennedy and Martin Luther King, Jr..

On the afternoon of April 4, 1968, Bobby Kennedy was on a plane to Indianapolis to give a campaign speech in a predominately black neighborhood. While airborne, he got word that Dr. King had been assassinated. His prepared speech was discarded and he went to work, digging deeply into his own experience with violence, with assassination - and with hope and compassion. It was one of the most moving a profound speeches given, ever, in any place or any time.

You can read the speech or watch it right here.

Here's part of what he said:

"My favorite poet was Aeschylus. He once wrote: 'Even in our sleep, pain which cannot forget falls drop by drop upon the heart, until, in our own despair, against our will, comes wisdom through the awful grace of God.'

As Robert F. Kennedy noted, there would be difficult, violent, discordant times to come. Kennedy himself was assassinated two months later. But his words of compassion and wisdom calmed Indianapolis. There was no violence there that night, as there was in Washington, Baltimore,  Kansas City, Chicago...

Two days later we were in Missouri, thinking about the events in Ferguson. Robert Kennedy's words are needed now, in Missouri, in San Antonio, in every place where people are divided, in every place where there is a struggle for justice, as a reminder that "the vast majority of white people and the vast majority of black people in this country want to live together, want to improve the quality of our life, and want justice for all human beings that abide in our land."

This time, can we make it so?

If you're in Indianapolis, the stature commemorating Kennedy's speech is about five minues from downtown, at 17th and Broadway. To learn more about this day, the PBS documentary "A Ripple of Hope" is available as a DVD on Netflix. 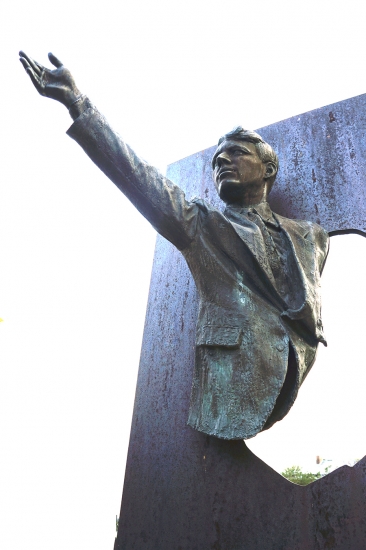