Choperena’s work deals much with movement.

“Every shot, every video, is the evidence of a performance with the acts of montage and manipulation performed in camera. Movement is the primary performative act," Choperena said.

That montage and the manipulation of montage through movement are done within the camera and that movement is the occurrence in which both meet through Choperena’s manipulation of aperture, manipulation of light, of exposure setting hint at a delicate interplay between elements the artist strives to bring forth. The resultant images almost a documentation of this performance process.

Of course, the documentation is the art itself. Choperena manipulates both time and space to create prints using an inkjet and lithographic process in combination with transparent ink and mica glazing. In his control of space the artist carefully maneuvers the camera and utilizes light, movement, and exposure settings to create works at once haunting yet celestial in their scope.

His technique is amazing in that his ability to absent the original object for its hidden quality, its “chroma” shows what lies underneath.  The transmission of whiteness bleeding from color is what make his work visually appealing, and the use of the word by the artist himself hints at more than just color usage: the sound of color comes vibrating through his images.

If the show takes inspiration from Sagan, then it is evident in the forms themselves. It is as if these images were created from the ideals relevant to different aspects of theory concerning the cosmos. String theory comes to mind; the vibrational quality of strings humming existence into being.

When questioned on this possible connection Choperena had an answer.

“We are all interconnected through particles and waves at many levels," he said.

While Choperena has much work dealing with line and color, this installation at Dock Space is especially interesting due to the artist bleeding out color and stripping down the work to reveal even more of the images essence. But even more amazing is the multiple ways that art has much to draw from concerning science and mathematics- even from spirituality.

However, there is much science and math in the fabrication of camera equipment as well as a spirituality in their utilization; especially in techniques employed to lay truth bare, hybrid printing techniques being Choperena’s method of calling forth his imagery, his truth. All this burns into the image.

“I think there is a spiritual feel that exists in science, mathematics, music, and art," he said. "It is all made up of the most elemental particles.”

Again, the mention of elemental particles conjures up images of Sagan, Einstein, Boson particles, string theory, quantum theory, and a plethora of other scientific cosmological connotations in the realm of the unknown. Much of Choperena’s oeuvre thus far oozes with color; line is, moreover, equally important as well as texture. There is this progression up to this point in time, this space. It can be seen as an evolution of sorts. The image stripped of color. The transparent ink approach utilizing mica glazing. This is where the movement of his camera has taken him.

“I am influenced by photography based artists like Carlos Betancourt, Chuck Ramirez, Hiroshi Sugimoto, and Thomas Ruff," Choperena said. "Jason Martin is a painter that I have followed for decades that influences my work by introducing the importance of texture and movement.”

Martin's influence is evident as well as the others. Some of Choperena’s color/line work recall Gerhard Richter’s strip paintings. Richter is known as one of the world’s most expensive painters and still kicking at the age of 84.

Bill FitzGibbons, Dock Space Gallery owner and international artist, was asked what drew him to Choperena.

Afterall, FitzGibbons does use color innovatively in his own light installations.

“I think that the implied movement of Rudy's compositions conceptually parallel some of the kinetic movement of my light sculptures," FitzGibbons said.

"I think that his recent series for "Interventions of Light" evoke a cosmological sense, outside the universe looking in," he said.

Rodolfo Choperena’s latest incarnation of work definitely evokes this sense of looking in from the outside through the means of revealing the hidden within objects close to the artist. 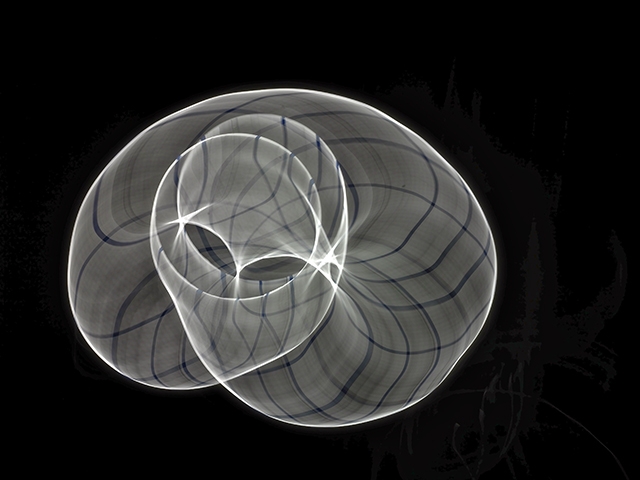