As a representative of the International Woman's Day March Planning Committee, I traveled to New Orleans by bus on Sunday, April 25, with a delegation from San Antonio, including members of the IWD Committee and of the San Antonio Free Speech Coalition. We headed to the 5th Circuit Court of Appeals to defend our right to free speech and assembly.

This first-person article was originally published in "La Voz".

We have been organizing against the unjust and unconstitutional process that the city of San Antonio uses in issuing permits for street events like marches, demonstrations, posadas and parades. Briefly, the city allows people whose ideas and messages the city endorses to use the streets for free; everyone else can't use the streets unless they pay thousands of dollars. With the threat of fees so high, most people don't even try to get a permit.

The Esperanza Peace and Justice Center and the IWD Committee tried to get the city to change its process in 2007, but instead the City Council reaffirmed it. The IWD Committee and the Esperanza Center then joined with others to form the Free Speech Coalition and file a lawsuit challenging the city's permitting policies. The city's permitting policies threaten the International Women’s Day March, which is now in its 20th year, and all others that take their message to the streets.

On Monday, April 26, we spent an entire day familiarizing ourselves with the history and current state of New Orleans through a guided tour from the amazing and lively Viola Washington, Executive Director of the Welfare Rights Organization in New Orleans.

We heard stories of the devastation left after Katrina. Truly saddened and appalled, I learned that public housing unaffected by Katrina was torn down. I was especially interested in Endesha Juakali, of Survivor Village, who has lived in the St. Bernard Community for over 50 years.

"We weren't victims of Katrina. Katrina was an opportunity to carry out a plan that was already set for New Orleans. The powerful, thought these neighborhoods were too valuable for the poor black people, so after Katrina they made us leave, fired teachers and bus drivers, and every institution reverted to white people in power. After 30-plus years, New Orleans now has a white mayor, again. With the criminalization of the poor and homeless, union busting, tearing down public housing, dismantling the public school system, the story of how New Orleans has become a 21st century plantation continues."

Safe Streets, another community organization we visited works for police accountability and for a new criminal justice system in NOLA that creates safe streets and strong communities for everyone, regardless of race or economic status. We also visited folks at VOTE, a grassroots, membership-based organization, founded and run by formerly incarcerated persons and allies. It’s dedicated to ending the disenfranchisement of and discrimination against formerly incarcerated persons.

That evening, we held a community event at the Community Book Center, an African-centered bookstore and gathering space with books by and about people of African descent. The owner, Vera Warren-Williams, made us feel so welcomed. It gave the San Antonio community an opportunity to connect with New Orleans community to share stories about local organizing.

The following day, Tuesday, April 27, all of us from San Antonio gathered on the steps of the 5th Circuit Court of Appeals building along with our new and old allies in New Orleans. We stood together in solidarity, understanding more and more about how our cities’ struggles are connected and how San Antonio’s aggressive restrictions on street demonstrations will affect cities across the country.

San Antonio has taken the position that the streets are private property, to be used only by those who have money and influence: "It's like renting a house," one San Antonio official explained. This lawsuit will set a precedent saying whether the streets are public space, available for people to gather; to express our views on important issues; and to engage in the cultural and religious activites that maintain our communities, like the traditional social aid and pleasure clubs of New Orleans and the posadas in San Antonio.

The City of San Antonio seems to change its story every time we are in court. In the Fifth Circuit Court of Appeals in New Orleans, Amy Kastely, the Coalition's lawyer, explained that the City has been deciding who should be allowed free access to the streets on the basis of the permit applicant's "message"; for many years- and also, has been using the threat of high fees to intimidate people the City doesn't want to have on the streets for many years.

Deborah Klein, council for the City of San Antonio, tried to argue that the parade ordinance actually encourages free speech! She stated, "you're going to get your free speech because an event can happen and not a dime be paid because you are billed after."

After the arguments, I was on Ms. Klein's heels alongside other reporters. I asked her what the likelihood is, based on her argument, that a community group will be able to get a permit for the following year if they didn't pay their first bill. She replied, "you could easily get a security bond to pay for the permit or go to court to get the event permitted."

That doesn't sound like free speech to me. It also doesn’t sound like you can still have your event, since you would be without a permit unless you have money or wind up going to court!

We will hear from the 5th Circuit Court of Appeals within six weeks to six months. Their ruling will decide whether our case will return to the local district federal court for trial as opposed to upholding the local district court's order.

New Orleans and San Antonio share the struggle and have come together to raise awareness about the connection of limiting our public space to other issues like police brutality, violence against women, gentrification and privatization. We will not give up our homes, streets, parks and plazas or our cultural traditions to private interests. We share the struggle of being pushed out of homes that we have lived in for generations.

Both communities have been exploited for profit. The Riverwalk, the French Quarter…same struggle, same fight! Whole communities are being pushed out for the tourism industry. But we will not be silenced! We are here, we exist and that is our political power. We stand in solidarity to say Las Calles No Se Callan! Our Streets will not be Silenced!" 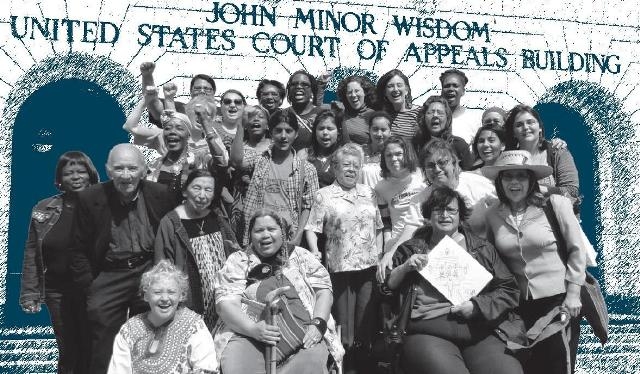