While on paternity leave, I noticed Taqueria El Trompo in a little strip mall off of Harry Wurzbach and Austin Highway. However, it took me nearly seven months to stop in because - 1) I now have a toddler and a baby that take up a lot of time and 2) the taqueria is situated in that weird nook off of Austin Highway that’s a little difficult to get to. But when I was with a buddy in that area looking for lunch, I immediately knew where we’d go.

For those unaware, the trompo is a huge spit that’s used to prepare tacos (often al pastor). One of my favorite online taco celebrities to follow is José Ralat, of The Taco Trail, and he has been a huge promoter of the trompo in the Dallas and Fort Worth area. So I knew I had to check this place out because of all the praise Ralat’s given to the trompo.

The restaurant is unassumingly small; we arrived on a day where it was not overly packed but I could quickly see how you might have to take your food to go. Most of the language spoken in the restaurant was Spanish, which makes sense because as opposed to a Tex-Mex restaurant, El Trompo’s menu resembled more of interior Mexico styled tacos.

After my visit, I reached out to owner Ayleen Valdez over Facebook, and found out that the restaurant was opened in October of 2015. “We used to have [a] business in Mexico but this is our first restaurant here in San Antonio,” Valdez told me. Ten years ago, her husband had a food truck in Jesus Maria, Jalisco where he specialized in breakfast tacos and plates. But with their initial restaurant in San Antonio, they wanted to bring the classic taste of the trompo to the Alamo City. 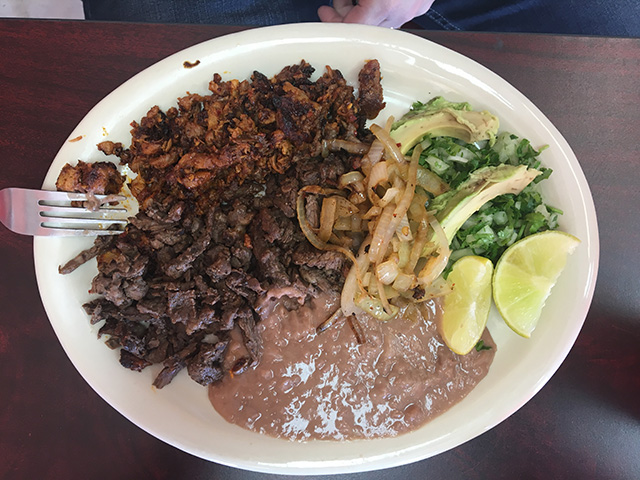 However, on my visit I noticed that the trompo was not active—it turns out the al pastor is prepared on the grill Monday through Wednesday. Ayleen told me that the trompo is only used on Thursdays, Fridays and Saturdays because she said that they “have more people on the last days of the week.” I reached out to José Ralat on Twitter and he said this is common because a trompo is only worth using if there is a lot of traffic—this made a lot of sense after checking out online pictures of how big this spit of meat is.

I had to order the al pastor—I mean, when in Rome, right? While I opted for an al pastor taco along with an asada taco, my friend was savvier and ordered the plate that featured two heaping portions of both styles of meat along with a setup of beans, avocado, cilantro, lime and grilled onions.

The al pastor was the star, with a deep red color from the adobo and a very earthy flavor that was not too spicy. This meat could stand on its own, but was complimented nicely by the tomatillo salsa. The asada was more typical fare and I found that it needed the árbol salsa. The corn tortillas were exquisite—they were the kind that are a little more chewy—and Valdez confirmed that they were made in the kitchen whereas the restaurant purchases the flour. I’d advise to get the corn over the flour, even if you tend to favor flour tortillas like I do.

The restaurant also specializes in tortas, Mexican hamburgers and hot dogs as well. I loved the meal, but I know that I’ll be back in the near future to do further research to see how the pastor tastes when prepared on the trompo!

Garrett Heath has written about the food and culture of San Antonio since 2009 on his blog SA Flavor. He also has an online store that sells Fiesta Medals and uniquely South Texan designs. 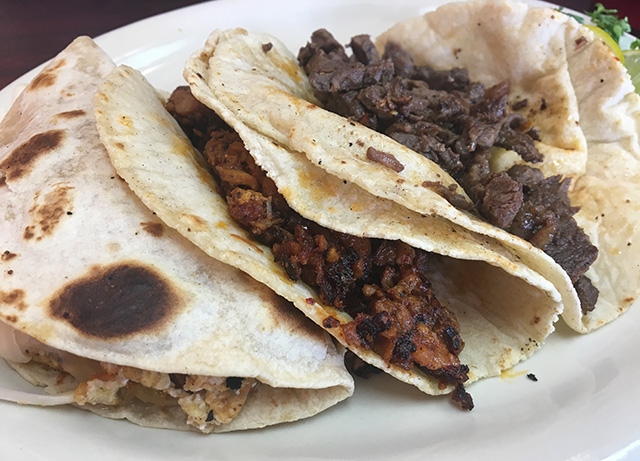