SA2020, the local nonprofit that’s charting San Antonio’s progress in several categories over a decade, said 41 percent of 59 target goals have been achieved or exceeded.

That was one of the big takeaways from a DreamWeek luncheon held Jan. 12 at the Witte Museum’s Mays Family Center.

Hundreds of people, including Mayor Ivy Taylor, reviewed highlights in a nearly 100-page report that charts the city’s progress and shortcomings in 11 key areas in 2016.

SA2020 partnered with Community Information Now (CI:Now) to gather and assess data from an array of official sources. What progress has been made and where?

According to CI: Now:

SA2020 President/CEO Molly Cox urged attendees to maintain the voter turnout momentum and take part in the May 6 local elections, which will include mayoral and City Council races, and a proposed $850 million bond.

There’s also been an increase in entrepreneurship, per capita income, and a reduction in unemployment. The city reported an unemployment rate of 3.7 percent in 2015, a seven-year low.

However, progress is slow in efforts to boost the number of professional certificates, and expanding the Science Technology Engineering Math (STEM) economy.

The city has exceeded the 2020 goal for high school graduation rates, and there’s some progress in improving kindergarten readiness, and in the number of adults earning college degrees. But progress is sluggish in efforts to improve third-grade reading levels, college readiness, and college enrollment numbers.

Maddy Canales, a local high school freshman, spoke on behalf of Camp To Success, one of more than 140 nonprofit partner organizations of SA2020. Canales spoke to the camp’s efforts to eliminate and/or reduce risk factors, such as low self-esteem and limited educational access, among young girls.

“This is an amazing group of people working in the best interests of our generation,” Canales said.

“We need people like Maddy Canales,” Cox told the crowd. “We need more people to go college, get their degree and even get their professional certification.”

Additionally, there’s more difficulty in raising the rate of employment in green industries, and improving air quality. For the latter, San Antonio currently is at risk of a non-attainment designation from the federal government regarding ozone levels.

Laura McKireran, a public health professor who works with CI:Now, noted that no one indicator can fully measure the progress, or lack thereof, in a category.

Still, as Cox said, it’s up to individuals and organizations in the grassroots levels that make the difference in helping San Antonio progress as a community. For example, Cox pointed to former Councilwoman Patti Radle, who as San Antonio Independent School District board president, successfully rallied community support for the SAISD’s bond proposal in 2016.

Cox cited architectural firm Overland Partners’ efforts to help make Cherry Street, on the East Side, more walkable. She also applauded local high-tech companies and organizations, such as Tech Bloc, for backing the arrival of rideshare enterprises, such as Uber and Lyft.

Cox also cited how the Boston Globe reported on collaboration between San Antonio police and other departments and the private sector in addressing mental illness.

“We step up when necessary, and we step in when warranted.”

The Kresge Foundation, a Michigan-based philanthropic group, found value in SA2020’s efforts to track these and other local collaborations and initiatives to improve the community. The foundation recently awarded SA2020 with a two-year grant totaling $400,000.

Gurpaul Singh, vice-chair of the SA2020 board of directors, said SA2020 is unique among U.S. cities.

“Every aspect of our lives is measured. We challenge to measure our progress as a community,” he added. 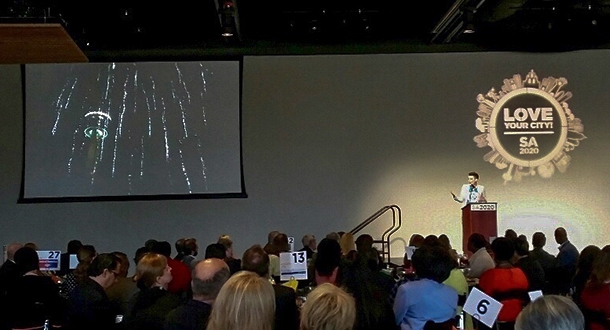