Congratulations to the San Antonio Fire Department’s (SAFD) very own Arson K-9, Kai, for being named one of the eight finalists for the 2014 American Humane Association Hero Dog Awards. Thanks to the public’s votes, Kai beat out more than a dozen other dogs to win the “Arson Dogs” category and she must now face off against the winners of the seven other categories. Voting is now open for the final round that will determine which heroic hound will be named this year’s American Hero Dog, at the fourth annual Hero Dog Awards in California. The public is invited to submit one vote per day through Monday, September 15, 2014 at http://www.herodogawards.org/vote/?nominee=89247242.

Kai is the SAFD’s only Accelerant Detection Canine. She is a shelter rescue dog who has now been with the department for almost four years.  Kai is a six-year-old female Black Labrador Retriever. She was caught by a dog catcher and placed in Animal Care Services in Central Illinois. Her owners forfeited her and she faced certain death when the McLean County Humane Society stepped in and rescued her. While at the facility, she was noticed for her drive and a call was made to State Farm’s Arson Dog Program. SAFD Arson Investigator Justin Davis and K-9 Kai were partnered together in July of 2010. Kai is trained to detect petroleum based hydrocarbons like gasoline and charcoal lighter fluid. She assists in investigations locally and around Bexar County by locating key evidence. K-9 Kai also educates the public about fire safety and fire investigation by making appearances and going to school demonstrations. 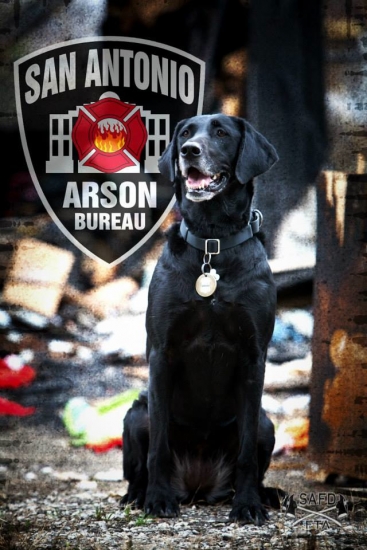