On your typical day in San Antonio, about 2,800 people are homeless, according to the San Antonio Metropolitan Ministries (SAMMinistries), an interfaith ministry dedicated to helping the homeless and those at risk of becoming homeless.

Many will blame the homeless for their plight, saying individuals are responsible for their own circumstances. But for about half of the homeless people in the city, that argument simply does not work.

The SAMM shelter estimates that about half of the homeless in San Antonio are children. SAMMinistries says the average age of a homeless child in San Antonio is 6 years.

While it is "back-to-school" time across Texas, it is a bit more complicated for homeless children. SAMMinistries recently called attention to the problem with its annual Back-to-School Bash at its Transitional Living and Learning Center located on Blanco Road.

“We still serve San Antonio families, elderly and veterans who are homeless," SAMMinistries President and CEO Navarra Williams said. "However, spotlighting child homelessness will help our efforts to overcome homelessness.”

At the bash, about 200 children received clothing and school supplies they will need to take on the new academic year. In addition, SAMMinistries offers tutoring and other support services for the kids, who may need more help than children with more stable living arrangements.

"Homeless children typically are hungry," Williams recently told NOWCastSA. "They don't have as much food. Also, homeless children get sicker than normal children, so it's a tough time."

Across the country, according to a 2012 report by the U.S Department of Housing and Urban Development, about 634,000 Americans were homeless – about the number of people estimated to live in Portland, Ore., the nation's 26th largest city by population.

Of the total homeless population in the country, the report said about 38 percent were unsheltered, living in places "not suitable for human habituation" – places such as streets, campgrounds, abandoned buildings, vehicles, and parks.

Across Texas, according to a 2014 report by the National Center on Family Homelessness, there were 190,018 homeless children, roughly a 25 percent increase over the past two years.That is a little more than the estimated total population of Grand Prairie, Texas (population 187,809). Texas ranked 40th in that report for the risk of child homelessness (with 50th being worst).

Due to the high levels of stress, according to the report, homeless school-aged children have mental health problems requiring clinical evaluation at two to four times the rate of other children in a similar age range.

"Children experiencing homelessness are among the most invisible and neglected individuals in our nation," the report said. "Despite their ever-growing number, homeless children have no voice and no constituency. Without a bed to call their own, they have lost safety, privacy, and the comforts of home, as well as friends, pets, possessions, reassuring routines, and community. These losses combine to create a life-altering experience that inflicts profound and lasting scars."

One happy ending for SAMMinistries centers on a woman named Roxana and her two children, who escaped a domestic violence relationship only to find that her low-paying job couldn't cover the bills.

Roxana applied to SAMMinistries and was accepted into the Transitional Living and Learning Center just in time. The day after she and her children were evicted from their apartment, they received the keys to a room at SAMMinistries.

Roxana and her children applied themselves to the program. Working with those available services, Roxana moved her family out of SAMMinistries in 18 months. She graduated from Texas A&M-San Antonio and pursued a career as a Licensed Interpreter for the deaf. Roxana’s daughter, Daniela, graduated from high school and began taking classes to become a sign language teacher. Her son, Cesar, made his high school varsity wrestling team as a freshman.

That's two homeless children in San Antonio whose lives have been made better by their mother, with assistance from the donors, volunteers and professionals at SAMMinistries. 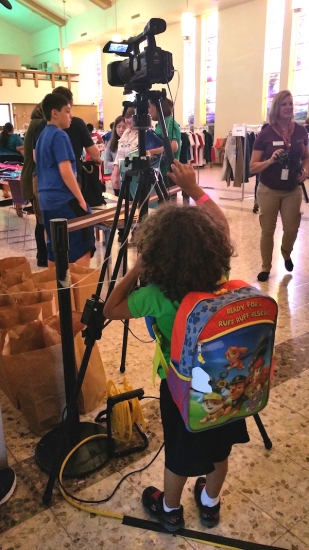