San Antonians involved with eco-friendly sustainability and placemaking highlighted their projects, and promoted the city's potential, at a unique conference in Austin earlier this week.

South by Southwest (SXSW) Eco is the three-day, ecology-centric version of the nearly two-week-long multimedia festival held each March. By design, SXSW Eco, held every fall, is smaller in scale and draws way fewer attendees than its spring counterpart.

The nonprofit did it again for SXSW Eco. Thanks to partners such as Bexar County, Brooks City-Base, Overland Partners architectural firm, and Edwards Aquifer Authority, Choose San Antonio led another effort this week. This time it was to promote the city as a leader in environmental sustainability and community design and redevelopment.

This public/private partnership organized a trade show space Monday and Tuesday at the Austin Convention Center, reusing some parts of its colorful, icehouse-theme spot that Choose San Antonio featured at the full SXSW trade show in March.

Monday night was a party of sorts at Half Step cocktail bar just south of the convention center. There, Choose San Antonio and its partners talked with visitors in a free-admission, public activation -- a takeover of the bar, in a way.

But visitors also enjoyed an open bar for a few hours, and a performance by San Antonio's Doc Watkins Trio. Dr. Brent Watkins, who founded the South Texas Jazz consortium of musicians, recently opened the Jazz, TX venue at Pearl. San Antonio's Steven Lee Moya served as DJ, providing more musical entertainment out in the patio area of the bar.

Before night's end, Meghan Garza-Oswald, Choose San Antonio's executive director, was happy with the attendance and with how reaction by many visitors to San Antonio's organized presence at SXSW Eco.

"We've met with people from Finland, Sweden and Tanzania," Garza-Oswald said at Half Step. "They asked, 'Are you representing San Antonio?' The answer is yes and no."

San Antonio was the only municipality represented, in a way, at the SXSW Eco trade show, and was among several cities worldwide at the full South by Southwest in March.

Choose San Antonio has not officially represented the city of San Antonio, but did garner some city funds for its efforts in March and hopes to do so again for a 2017 SXSW mission.

However, Choose San Antonio and its partners promote the traits they believe best reflect the growing city. These include the city's sensitivity to ecological issues such as water conservation, increasing economic opportunities, the rising technology sector, and treating greenspaces as vital parts of a vibrant community.

In the trade show, visitors of different ages complimented the icehouse them. Some said they either look forward to their first trip to San Antonio - or a return trip - based upon hearing about the city's growth.

Garza-Oswald said San Antonio got to stand out a bit more at SXSW Eco: "We're like a big fish in a small pond." She added that Choose San Antonio has successfully targeted a niche audience.

Terri Herbold, a spokesperson and public relations supervisor for the EAA, said ensuring a high-quality water supply for the nation's seventh largest city is critical to supporting a high quality of life for its residents.

"To have a sustainable, livable city that can support growth, you have to have water," she said. "You have a have a good quality and quantity of water. It's the mission of the EAA to manage, preserve and protect the water source, the Edwards Aquifer."

Herbold added: "We support San Antonio being more livable, more metropolitan, a cooler place for millennials. We're just trying to make sure there's a sustainable water source for the future."

Partners in the "SATX @ SXSW Eco" mission said places such as Brooks City-Base, the Air Force Base-turned-mixed-use community, are partially the result of San Antonio's raised profile. The blend of academic, residential, business and industrial development at Brooks City-Base is part of the economic revitalization on the city's Southside, city officials and advocates have said.

But more than just mixed-use developments and the like, neighborhoods and greenspaces are getting more attention around San Antonio. Monday night's Choose San Antonio activation included the unveiling of a brand associated with the so-called "Emerald Necklace." It's how locals are describing the Howard W. Peak Greenway System.

The circuit of 86 miles of paved paths, nature trails and linear parks is nearing completion. It's all flanked by the Leon and Salado creeks, and the Medina River. This, San Antonio officials say, is part of a larger effort to make more walkable communities around which residents can realize the potential of their neighborhoods.

A part of the Half Step bar became a showcase for San Antonio's place-design talent on Monday night. Representatives from Public Space East offered what they called "Park in the Box."

It was an opportunity for casual discussion between visitors and organizers who are reimagining a way to unite two parks, Dignowity and Lockwood, to benefit the near-Eastside and the entire city.

Public Space East and San Antonio Parks Foundation are spearheading the Dignowity Park Project. "Park in the Box" included a large wraparound surreal image of the Dignowity/Lockwood park area, and virtual reality viewers that helped visitors to envision a look of the future neighborhood.

The project is a community-based place-making design endeavor. Architect and project co-director Allison Hu said San Antonio has the public assets that could make it one of the nation's most culturally diverse, civically engaged cities.

"We really need to show the general public and our communities that it can be done. You can have a voice, you can change public policy. This is an example of this," Hu said. "This is a community park re-envisioning process that has made its way to the (2017 city) bond process."

Hu is excited about Dignowity Hill residents being encouraged to attend community bond meetings and learning more about proposed projects, such as Dignowity/Lockwood, that could impact their neighborhood and the city as a whole.

"It's going to be a place for newcomers and the existing community. It's going to be part of each other's lives. Everybody has set the stage for successful interaction," she added.

Hu said it is important for a project such as Dignowity Hill to include affected residents in planning in a meaningful way so they not only "get to enjoy the product, but that they are part of its creation."

U.S. Rep. Lloyd Doggett (D-Austin) attended the San Antonio activation at Half Step. He said all that Choose San Antonio and its partners have showcased at SXSW Eco this week reflected the city moving forward with a positive image of sustainable growth.

"It shows much of what San Antonio offers to new businesses" Doggett said. "Then there's the Solar San Antonio effort, the emphasis on renewables, the growing concern about the environment, and the joy of enjoying everything from the Mission Reach (Riverwalk) to the trails all over San Antonio. It makes it a sweet place to be." 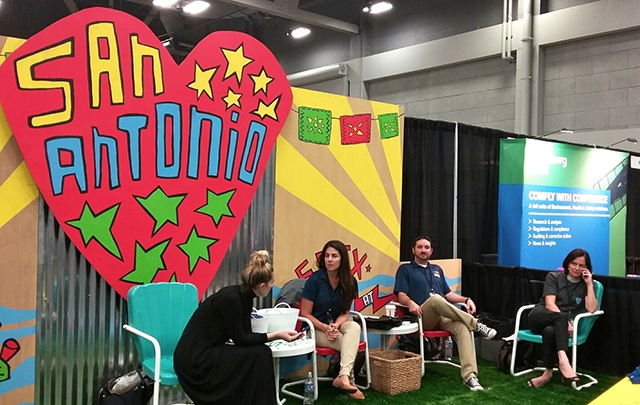