The cities of San Antonio and Austin announced on Thursday they have joined the fight to stop the state's new immigration enforcement law, Senate Bill 4, in federal court.

SB 4 allows peace officers to question the immigration status of people they legally detain or arrest and punishes department heads and elected officials who don’t cooperate with federal immigration agents by turning over immigrants subject to possible deportation. Elected or appointed officials found in violation could face criminal charges in the form of a Class A misdemeanor and possible removal from office.

Gov. Greg Abbott signed the bill into law May 7, and it is scheduled to go into effect Sept. 1. But opponents of the measure hope that a federal court will find the bill unconstitutional.

The city of Austin’s city attorney will file a motion to intervene and join the plaintiffs Friday but will use its own attorneys and introduce certain Austin-specific claims, a spokesperson for Austin City Councilman Greg Casar said.

Abbott and Attorney General Ken Paxton are the named defendants in the litigation.

During a press call late Thursday afternoon, Thomas A. Saenz, MALDEF’s president and general counsel, said the lawsuit contains “arguments against each and every provision in SB4.” Specifically, the lawsuit alleges the bill, if enacted, would violate the First, Fourth and 14th Amendments to the U.S. Constitution.

“All of those multiple constitutional claims basically relate to the illegality of empowering each and every police officer, sheriff’s deputy, booking agent and other law enforcement figures in the state of Texas to decide on their own, without any guidance or restriction from their duly elected superiors and appointed police chiefs ... whether and how to enforce federal immigration law.”

The filing comes after the city of El Cenizo in Webb County and Maverick County filed a lawsuit on May 9 to halt SB 4, which was followed by a lawsuit about two weeks later by El Paso County, its Sheriff Richard Wiles and the Texas Organizing Project Education Fund, a client of the Texas Civil Rights Project.

Saenz said he expects the separate cases will ultimately be consolidated.

“There are still many weeks to have the cases consolidated, for motions to be filed ... and to be heard and decided before Sept. 1,” Saenz said. “There is no reason, at present, to panic” about the law's implementation, he said.

The bill was one of the most contentious issues of the recently concluded regular session of the 85th Texas Legislature. It led to hundreds of protesters on Monday flooding the halls and House chamber of the state Capitol for an hours-long rally against the law, which led to a shoving match between Democrats and Republicans after state Rep. Matt Rinaldi, R-Irving, taunted border lawmakers and said he called Immigration and Customs Enforcement officers on the protesters.

This article originally appeared in The Texas Tribune at https://www.texastribune.org/2017/06/01/san-antonio-austin-suing-texas-over-immigration-law/. 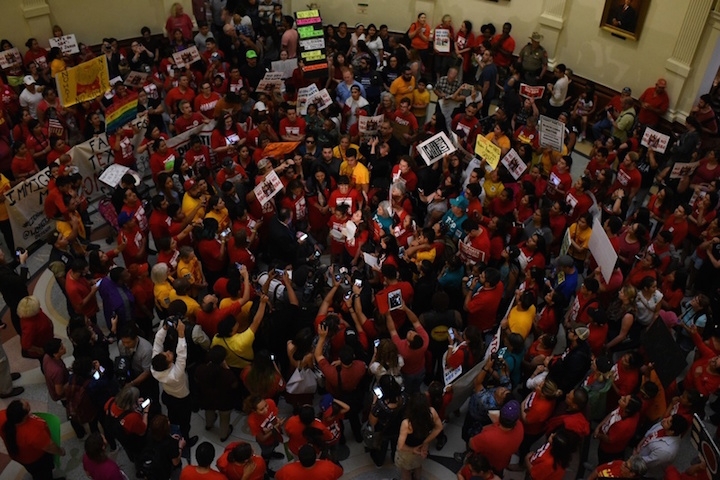