The proposal to redirect the funds was supported by Mayor Ivy Taylor when it was presented by Department of Human Services Director Melody Woosley during the City Council 2017 Budget Policy Goal Setting Session on June 8. 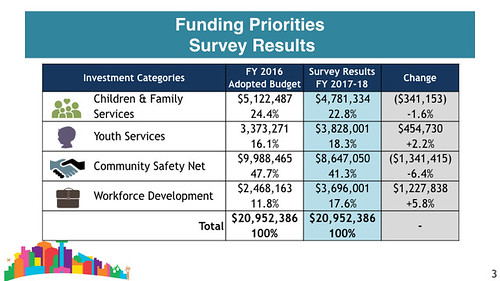 In her presentation, Woosley said a survey of city council members' priorities earlier this year “resulted in significant reallocation of funding between categories, most significantly, a $1.3 million reduction from the Community Safety Net category, and a $1.2 million increase in Workforce Development.”

Through the Department of Human Services and the Economic Development Department, San Antonio contracts with nonprofit “Delegate Agencies” for services the city does not provide. The contracts are awarded through a competitive process every two years, and the allocation is guided by the mayor and city council.

Based on the council survey,  Woosley outlined $1.3 million in cuts 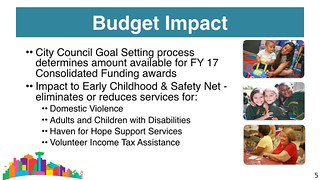 that would eliminate or reduce city funding next year for domestic violence “Safety Net” services provided by the Alamo Area Rape Crisis Center and the Battered Women and Children’s Shelter, services for adults and children with disabilities, support services at Haven for Hope and the Volunteer Income Tax Assistance Program. The slide from her presentation (right) shows the impact of the cuts.

(NOWCastSA webcast the council session and you can click here to replay the video starting at the DHS presentation.)

Nirenberg immediately condemned the proposal.  “To pull that money from our agencies that are working, sometimes single-handedly on these most important issues, is a huge mistake at the very wrong time for our community,” he said in the meeting. (link to video of his remarks)

Taylor defended the proposal to move money out of the Safety Net services and into workforce development.

“I agree that nonprofits do a lot of work in very critical areas helping families that are at risk. But, if, as was noted, we keep making the same investment year after year, but what do we get, more need? Then to me, that says we should rethink how we make the investment,” Taylor said during the meeting.

“So I think we can make a difference in those categories by addressing poverty, which I see as us doing through education and workforce development” Taylor added.

“So that’s why I would say that I think the way we currently have the investment categories (the DHS proposal) makes sense because I don’t think we should keep making investments year after year, just to see a continued increase in those horrible statistics,” Taylor said. (link to video of her remarks)

In an interview the next day, Nirenberg called the reallocation “unfortunate and dangerous.”

“We are talking about real lives that are endangered or lost without these services,” he said.

“Right now, San Antonio is at or near the top in victims of domestic violence, child abuse and neglect, and child deaths. These problems do not go away on their own and they will not be solved overnight,” he said.

“Taking money from domestic violence prevention and putting it into workforce training may be a long-term strategy, but to think that just changing the funding will change outcomes is criminally short-sighted,” Nirenberg said.

Detail on the cuts

Overlaying the DHS proposal on the Delegate Agency section of the 2016 budget (link to budget; see page 326) gives a detailed look at what services would be eliminated or reduced:

The Delegate Agency budget shows the city contracted to pay the Alamo Area Rape Crisis Center $73,356 in 2016 for crisis and emergency services, specifically to provide trained advocates to support victims of rape and abuse during their sexual assault forensics exam.

The Delegate Agency budget said the city contracted to pay Family Violence and Prevention Services $200,701 to provide 24-hour crisis intervention services at the Battered Women and Children’s Shelter in 2016. The shelter said it would use that funding to conduct 1,650 intake assessments and provide ongoing case management to 1,485 victims in 2016.

The 2016 budget shows Haven for Hope will be paid $922,000 in 2016 to provide residential support services for men, women and families, while Catholic Charities, Family Service Association and the YWCA of San Antonio were to receive a combined $79,000 for providing income tax preparation services under the VITA program.

According to the Texas Council on Family Violence, San Antonio’s Battered Women and Children’s Shelter consistently has more daily residents than any other shelter in Texas. The Council said Bexar county had 13,227 incidents of domestic violence in 2014, but cautioned that fewer than a third of all domestic violence incidents are reported to law enforcement.

Patricia Castillo, executive director of the Putting An End to Abuse through Community Efforts (P.E.A.C.E.) Initiative, said it is a mistake to cut domestic violence services.

“At the P.E.A.C.E. initiative, our job for the past 26 years has been to educate our community about the deadly consequences of domestic violence and how communities can more effectively respond,” she said. The  P.E.A.C.E. initiative founded what is now the Family Assistance Crisis Team (F.A.C.T.) program in the San Antonio Police Department victim services Special Victims unit.

“Services are needed because domestic violence historically has been an intergenerational problem,” she said. “Cutting services will send a message that the violence can continue and it will be served in a very minimal way due to these cuts,” Castillo said.

According to data from the Battered Women’s and Children’s Shelter, 74 percent of Texans have experienced some form of domestic violence or have a friend or family member who has experienced it.

Among those who joined Nirenberg in objecting to the reallocation of funds at the budget session was District 1 Councilman Roberto Treviño, who said decreasing funds for Safety Net services “doesn’t make any sense.”

District 4 Councilman Rey Saldaña agreed. “When I see a decrease (in the Safety Net services) it makes me uneasy,” said Saldaña. “It encompasses a lot of nonprofits that I think are truly important to some cracks that a lot of our residents fall through, unfortunately.”

District 5 Councilwoman Shirley Gonzales also asked that funding for domestic violence be restored. “We continue to see high rates of domestic violence and childhood violence,” Gonzales said. “So I would like to see those investments continued.”

District 10 Council member Mike Gallagher argued in favor of putting a “term limit” on the number of years a delegate agency could receive city funding - something Woosley said was universally opposed by agencies who provide social services for the city. “Somebody has to say that, after a while, you’ve got to stand on your own and run your organization and quit depending on the city, which is behind in trying to fix potholes,” Gallagher said.

District 9 Councilman Joe Krier said he supported the term-limit concept and also supports the reallocation of funds. “I’m glad to see there is a net increase in workforce development,” Krier said. “The best thing we can do for most of the people being impacted is try to get them a good job. Then there would be a reduction in the need for the agencies and the need for the services.

The other city council members did not voice an opinion during the session on the proposal to reallocate funds.

The Delegate Agency competitive bidding process is already underway. Woosley said the city received 122 applications from 63 delegate agencies on May 6, all competing for a piece of a $12.1 million pie. 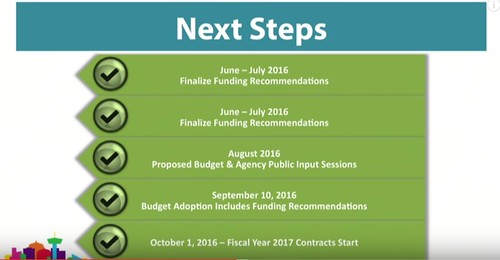 Eleven panels are reviewing and scoring the agencies’ proposals.

Recommendations will be made based on those scores, as well as alignment with city council priorities and the evaluation process.

Beginning July 1, the agencies will be subject ot a "blackout period,” which prohibits them from lobbying their case with city council members until after the budget is adopted in September.