San Antonio Female College was a boarding school that offered formal education for girls. It was once one of the largest all-girl schools in Texas. More than likely, you've never heard of it.

Mrs. Maude White Zachas, graduating class of 1898, later recalled her time spent at the school. "The girls of the school then were called 'guineas,' because of the uniforms we were compelled to wear. We were never permitted to have young men callers. We rarely saw boys except at a distance!"1

In 1890, The West End Town Company (Woodlawn Lake area today) set aside a tract of land, located in what was formerly the Asbury Place neighborhood, for the specific purpose of establishing a future women's college. The West Texas Conference of the Methodist Episcopal Church agreed to sponsor the venture. Soon after, Dr. J.E. Harrison was appointed president and business manager of the school. Harrison obtained the charter for the school in 1898 and broke ground in September of 1899 (figure 1). Harrison was a great orator: He held a doctorate in Theology, and often occupied the pulpit at Madison Square Presbyterian Church on Camden street. 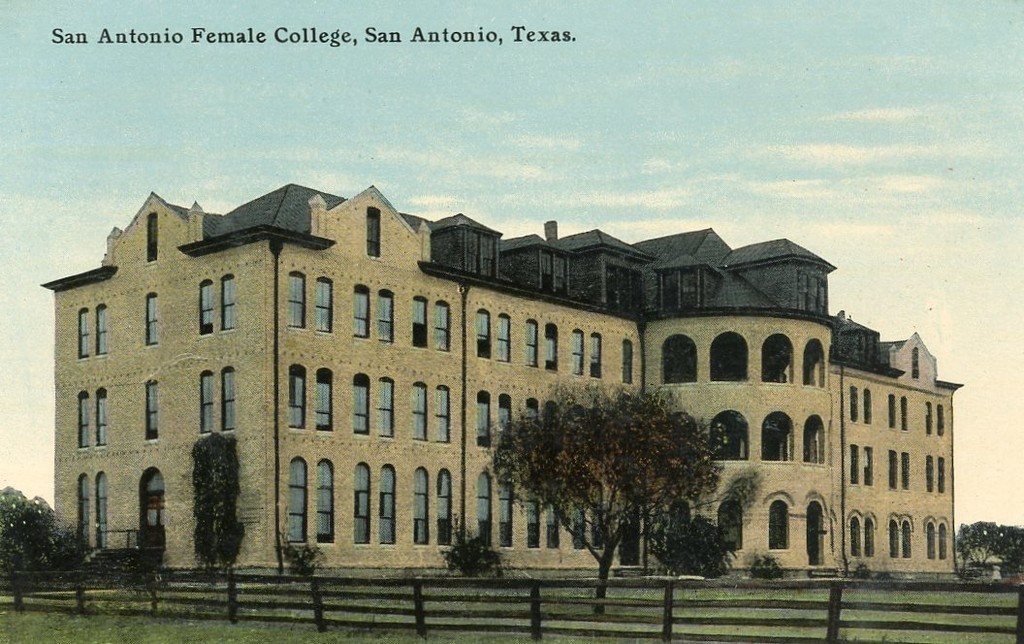 San Antonio Female College (SAFC) granted degrees in Literature, Music, History, Elocution (how to speak beautifully) and Latin. The coursework was common among female colleges of the day and reflects the popular sentiment of what were acceptable subjects of study for women. This should not discount the achievements of these women, however. While many women of the time were learning trades or toiling away in factories, students at SAFC were classically trained, learning how to play Mendelssohn concertos, or how to converse in Latin.

The degrees conferred, not being formally accredited until 1916, were slightly different than today. The lower degree, presumably the close equivalent of an Associates, was entitled "Mistress" and was the most common academic award among graduates; these included Mistress of Elocution, Mistress of English Literature, etc. SAFC also awarded Baccalaureate degrees and Graduate Certificates. At its height, around 1910, SAFC supported over 200 students from all over the state. In 1911, SAFC erected a new administration building.

"The new building is needed to meet the rapid growth of the school. It is to be built of brick and absolutely fireproof."2 This bit about the building being fireproof is likely in response to the Triangle Shirtwaist fires, which occurred in New York merely eight months prior. The first floor was entirely devoted to classrooms. The second and third floors housed an auditorium, library, and meeting spaces for art and literary groups. 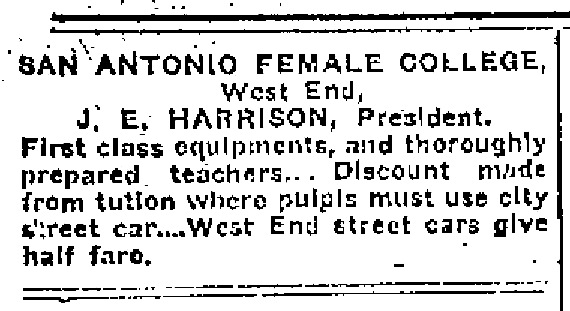 Streetcars were one of the key elements in the making of modern San Antonio. Students at SAFC received a tuition credit for using the West End streetcar line for transportation. This was likely an agreement between the school and the West End Town Company. Here we see a newspaper print ad informing young women of both the quality and affordability of the new school.

In 1904, SAFC debuted a brand new natatorium, or indoor swimming facility. Natatoriums were common in affluent areas of San Antonio and were probably quite muggy since the only form of ventilation was an open window. Not to mention, bathing suits at the time were made from wool. The natatorium was likely intended for recreation and fitness. SAFC offered a wide curriculum in physical culture. Pictured here is the graduating class of 1904 (figure 3). This picture may support an argument that SAFC did not exclusively matriculate Anglo students but also Hispanic students. From the evidence I have seen however, this was not the common practice at SAFC. Most colleges of this type were restricted to white students. The graduate on the top row, second from the left was Anita Tafolla, possibly SAFC's only Hispanic student. Two other students in this photo appear to also be Hispanic but I can not confirm that at this time. I find it striking how confident Anita looked on that day. Miss Tafolla graduated with her Mistress in Elocution. She later married a stenographer and moved to 1020 West Houston street, near the present day location of La Prensa newspaper. 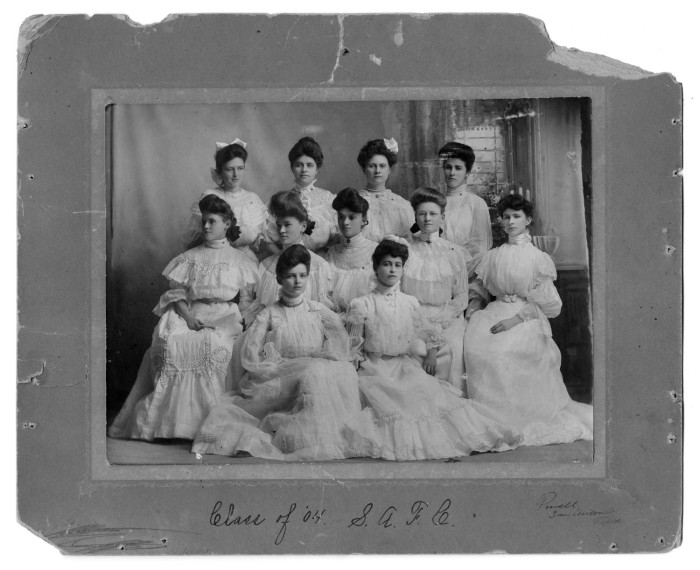 Throughout its existence, SAFC maintained a close relationship with the Methodist church. The presiding reverend of the Travis Park Methodist Church traditionally gave the keynote for the opening ceremony of the academic year. The campus contained its own church facility. Religion and music were an important part of everyday life at SAFC. The school frequently held classical recitals open to the public. The popularity of the school only increased with time. By 1911, SAFC provided the city of San Antonio with a $100,000 revenue. In 1916, the University of Texas recognized SAFC as an accredited junior college. 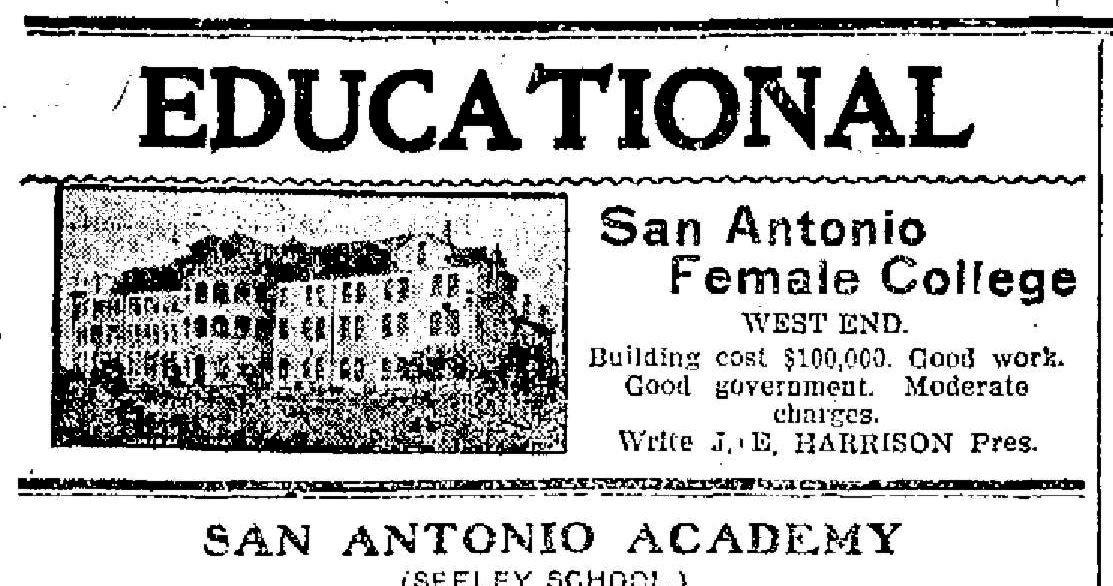 San Antonio Female College changed its name to Westmooreland College in 1918. The reason for the name change is unclear but perhaps it added a slight cache. The school was rapidly growing in the late 1910s. During the 1916-1917 school year, SAFC boarded 82 students. In the next school year, the number jumped to 113. By 1918, the school had around 140 boarders and 60 commuters. Nearby homes in the neighborhood rented rooms to accommodate the overflow. SAFC was growing and so was San Antonio. The school thrived as Westmooreland College and was again renamed the University of San Antonio in 1937. 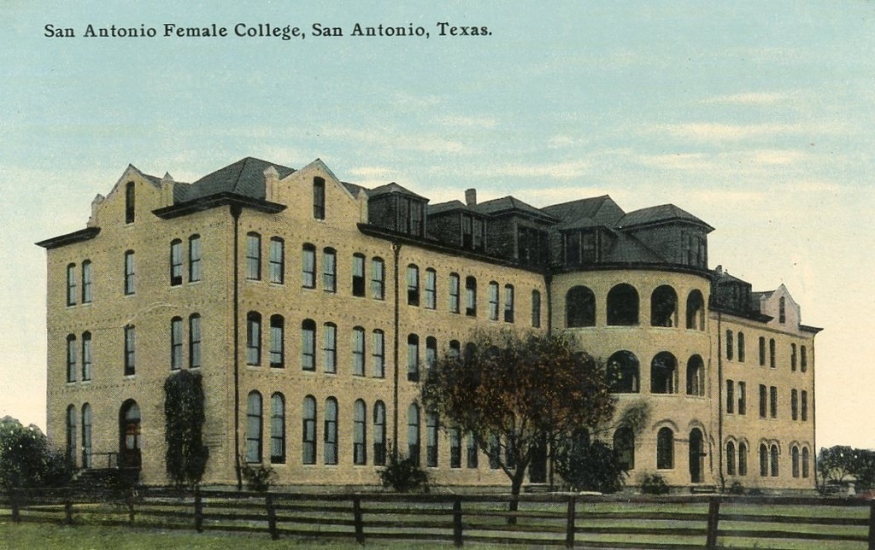