At San Antonio Fundraiser, Trump Is Prodded On Immigration, Trade

by Patrick Svitek, The Texas Tribune

SAN ANTONIO — As Donald Trump scrambles to build a fundraising network, the presumptive Republican presidential nominee has been relying on a number of people in Texas who do not see eye-to-eye with him on some of his signature policy proposals.

On Friday, June he heard from at least one of them.

At a private fundraiser in San Antonio, one of the hosts — Laredo banker Dennis Nixon — prodded Trump on immigration and trade while introducing the real estate mogul, who wants to build a wall along the U.S.-Mexico border and dismantle some trade agreements.

"Mr. Trump, we must support trade, but I agree we need fair trade," Nixon said, according to an audio recording of the event obtained by the Texas Tribune. "And here in South Texas, NAFTA meets the definition," Nixon added, referring to the North American Free Trade Agreement that Trump has railed against throughout his campaign.

In the lead-up to the fundraiser, much attention centered on Nixon, the CEO of IBC Bank and a longtime proponent of policies that seem to put him at odds with Trump. Hours before the event, a letter surfaced in which an IBC bank executive argued that Nixon has always stood up to fellow Republicans when he disagrees with them and that he would not treat Trump any differently.

At the fundraiser, Nixon agreed with Trump that the U.S. immigration is "broken" and that it needs to be fixed to "spur America's need for workers." But he seemed to differ with Trump on where the federal government's priorities should be in fixing it.

Nixon added: "I think that number alone should cause someone to rethink our strategy. As it's often said, doing the same thing over and over again and expecting a different result is the definition of insanity."

“Mr. Trump, we must support trade, but I agree we need fair trade. And here in South Texas, NAFTA meets the definition.”— Laredo banker Dennis Nixon

As he took the stage, Trump seemed to acknowledge Nixon's remarks while thanking Nixon and another host of the fundraiser, San Antonio developer Gene Powell.

Attendees confirmed that Nixon — and perhaps others — sought to use the event to get Trump to see their side of some of the issues he has talked about on the campaign trail.

"These were pro-NAFTA people that were putting on the event for him," said George Rodriguez, a local Tea Party activist. "There was definitely an effort to try to get him to change his strong stance on NAFTA and immigration."

If Nixon's remarks had any impact on Trump, he was not showing it hours later at a rally in The Woodlands, a Houston suburb. He attacked Democratic rival Hillary Clinton's husband, former President Bill Clinton, for signing NAFTA into law, calling it "maybe the worst economic development transaction ever signed in the history of our country."

He also dramatically imitated someone questioning his conservative credentials due to his trade positions.

"'You are not a conservative because you don't believe in free trade?'" Trump said, switching back to his normal voice. "Who cares?"

This article originally appeared in The Texas Tribune at http://www.texastribune.org/2016/06/18/at-fundraiser-trump-is-prodded-on-immigration-trad/. 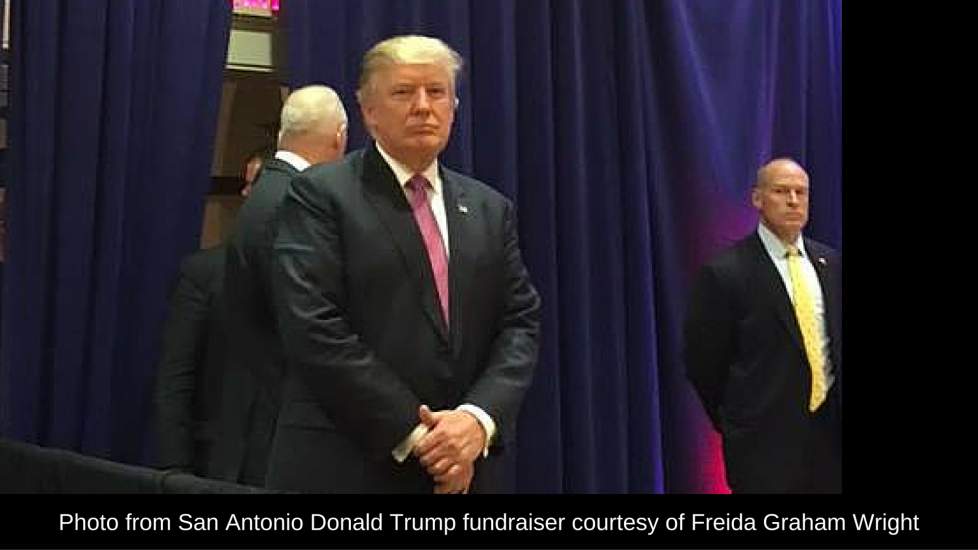