It was to show support for a national movement that rallied in different cities and international airports across the United States. Trump's action shut the border to citizens of seven Muslim-majority countries for 90 days, suspended all refugee admission for 120 days, and indefinitely blocked any Syrian refugees from entering the United States.

Trump's so-called travel ban was suspended last Saturday after a federal judge appointed by former President George W. Bush sided with state attorneys general in the states of Washington and Minnesota claiming it represented “immediate and irreparable injury” to their states.

Watch a video from the protest below.

Protesters gathered primarily as an expression of welcome for any refugees who may be arriving in San Antonio--particularly, perhaps, if any should still be closeted by Homeland Security as they had been at other U.S. airports that weekend. In a running string of chants and songs, the group decried the Trump order as part-and-parcel of his racist election-season promises to build a wall between the U.S. and Mexico, enact a total ban on Muslims entering the United States, and set up a Muslim registry to intensely police members of the faith within the country.

Current estimates hold that there are about 3.3 million Muslims living in the United States, representing roughly one percent of the total population. Immigration enforcement measures being developed in the White House are believed to represent a planned deportation of 8 million in the country illegally. Former President Barack Obama, referred to some derisively by some activists in the immigration community as the “deporter-in-chief,” ejected more undocumented residents from the country than any preceding president—2.5 million over six years in office.

At San Antonio International Airport, protestors chanted and sung and shared stories as they publicly objected to Trump’s actions as an unconstitutional display of rule based on hatred and fear. In fact, Trump quickly walked back the most obviously illegal elements of his order, the banning of current green card holders. Wrestling with the legal challenge this week, a trio of federal judges aren't overly impressed with the president's assertion of authority to enact the order's other elements unilaterally.

View a small photo gallery from the protest below. 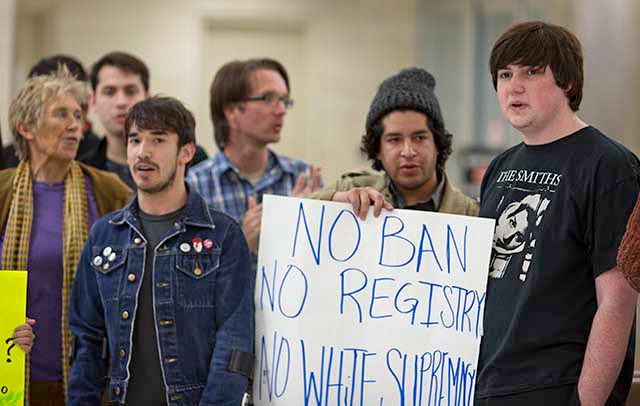 Pushback from the judiciary branch of government forced the release of many who had been held at several international airports, among them children, a one-time translator for U.S. military forces in Iraq, and (briefly) a former prime minister of Norway.

“We're going to respond to people being taken, and we're going to rapidly respond,” said John, a San Antonio resident who asked to be identified by his first name only. “We're not going to just sit idly by.”

Speaking to the group on Sunday night, San Antonio resident Judith Norman said: “I had relatives trying to flee Nazi Germany in the 1930s from Poland. But the U.S. had shut its borders to Jews and they were all killed in the death camps. So there's historical parallel. We know it's shameful.”

A “No Ban, No Wall” March will take place on Saturday, Feb. 18 to protest President Trump's executive order to ban refugees and immigrants for 90 days, and to build a wall along the U.S.-Mexico border. The march will start at Senator John Cornyn’s local office, located at 600 Navarro St. and begin at 11 a.m.

**Greg Harman is an independent journalist and founder of Deceleration.news, where this report first appeared. 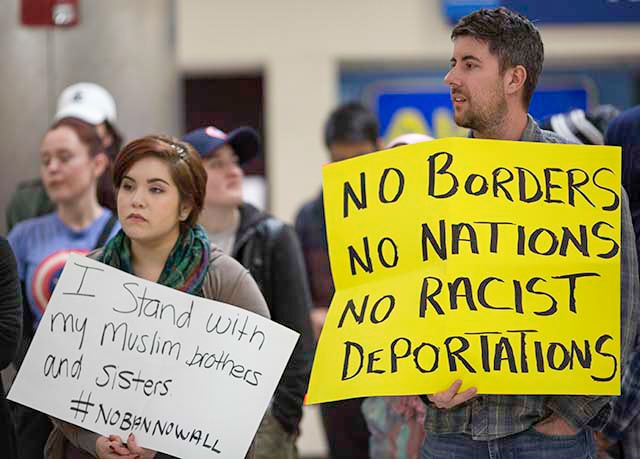