Google Fiber’s vow to install 4,000 miles of gigabit fiber optic cable in San Antonio over the next two years means those who can already afford broadband Internet will be able to purchase it at blazingly faster speeds. A typical home or small business connection could go from 10 Megabits per second to as much as 1,000 Megabits per second.

'This leap in speeds will open up an entirely new universe of exciting possibilities for San Antonio residents,” San Antonio Mayor Ivy Taylor said in announcing Google Fiber’s arrival. She predicted residents “will respond with a surge of innovation and ingenuity that will change our community forever - and may even change the world.”

But for nearly 40 percent of San Antonians who exist on the other side of the digital and economic divide, Google Fiber offers hope for going from zero Internet at home to a more level playing field, one that could change everything from high school graduation rates to breaking the generational cycle of poverty.

“I think certainly we are on the right path in trying to make access more readily available to residents who don’t have means,” Taylor said after the announcement.

She pointed out that Google Fiber is among the ConnectHome partners who are accelerating broadband access to public housing residents in San Antonio and 27 other cities (see NOWCastSA coverage of ConnectHome here.) ConnectHome will bring free high-speed Internet to about 6,000 San Antonio families who cannot afford to pay for broadband access without cutting back on necessities such as food.

Taylor said underserved communities have “definitely been part of the conversation” with Google Fiber. “We’re moving in the right direction. Six thousand families is a drop in the bucket," she acknowledged. "But it is a start.”

Clarissa Ramon, Community Impact Manager for Google Fiber San Antonio, said the company “understands that the digital divide is a complex problem that requires partnerships … We are definitely here to help come to the table.” But she added, “We’re bringing one piece of that puzzle.”

Ramon, a San Antonio native and graduate of St. Mary’s University, said her research showed that  “a little less than 40 percent of individuals do not have affordable broadband at home” in San Antonio.

She also acknowledged the so-called “homework gap” for students who get assignments that they are unable to complete at home because they do not have a computer and Internet access. By one measure, “80% of homework needs to be done online,” she said.

“So we will try to deal with that very specific issue,” Ramon said. “It will come back on the city to say ‘How are we going to fill in the gaps for individuals who are not in low-income housing, but do still find the affordability piece a real challenge?’ ”

The Mayor said the city is up to it.

“Maybe we need to have more community conversations about it so we can start building a plan,” Taylor said. “And you, NOWCastSA, can help us.” 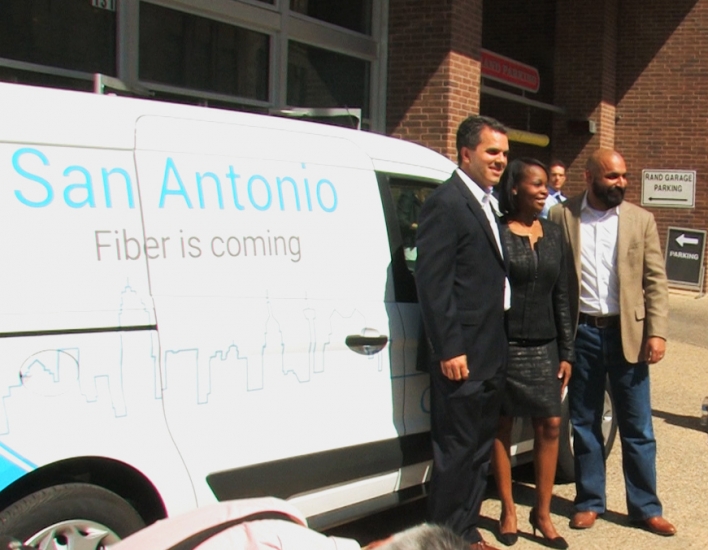