From San Antonio to Orlando

Inside the moment of one of America’s greatest tragedies, local, transgender comedian, Joan Riviera, had one piece of advice: “Don’t let fear overcome the day.”

Just hours after the worst mass shooting in modern U.S. history, San Antonio community members, including civic leaders, LGBT leaders and their allies, organized a vigil in Crockett Park to mourn the 50 lives lost at an Orlando nightclub and stand in solidarity.

“The community organically responded to the tragedy that happened in Orlando, Florida,” said Julian Tovar, a community organizer and who serves on the Board of Directors for Equality Texas. “Through that, I felt it was really necessary to organize, really mobilize everyone, to have a space to honor and mourn those who have been lost.”

“I wanted to be here in solidarity with the victims and the families from Orlando, and be here with other San Antonians,” said U.S. Rep. Joaquin Castro, D-San Antonio. “I think it’s important to send a message that we’re not going to stand for this kind of hate and this kind of extremism.”

“I want you to feel safe,” said McManus, “But, we ask you to be vigilant and aware of your surroundings… No one is going to hurt you, as long as SAPD is here for you.”

Despite the words of comfort, the LGBT community still has important questions when it comes to their physical and fiscal safety in San Antonio.

“San Antonio Police Department has been an ally for many years,” said Salcido. “My question to Chief McManus would be, 'Who is our new LGBT liaison and how can we facilitate that discussion so that we have a working relationship with that individual?' ”

Salcido said he also wants to see San Antonio’s anti-discrimination laws expanded to cover more than just city employees and city contractors. According to City of San Antonio’s Non-Discrimination Ordinance Facts, the ordinance was updated to “provide protections in the areas of city employment, city contracts and subcontracts, appointments to Boards and Commissions, discriminatory housing practices, and places of public accommodation.”

The ordinance still does not extend to private employers, an issue many local LGBT people are fighting for.

“As a city we need to make sure everybody’s protected, and that they’re not fired from their jobs simply for who they are or who they love,” said Salcido.

However, the topic of conversation at the vigil focused on unity for San Antonio’s LGBT community and allies. Guests lit candles to remember the victims and to push for acceptance and tolerance.

According to Rep. Castro, changing conditions for LGBT community in San Antonio comes down to changing people’s hearts and minds.

“I still believe we need to expand our anti-discrimination laws,” said Castro. “But a lot of this stuff is not just a matter of changing the letter of the law, but the spirit of the people.”

Diana Arévalo, a Democratic activist and candidate for State Representative for District 116, stressed the importance of recognizing that the LGBT community includes all of us.

“So many of us are so close in San Antonio. We all have friends and family that are part of the LGBT community. I consider myself a part of it because of my friendships,” said Arrevolo. “People are scared, and they shouldn’t be scared to leave their homes. That’s why I thought it was important for me to be here.” 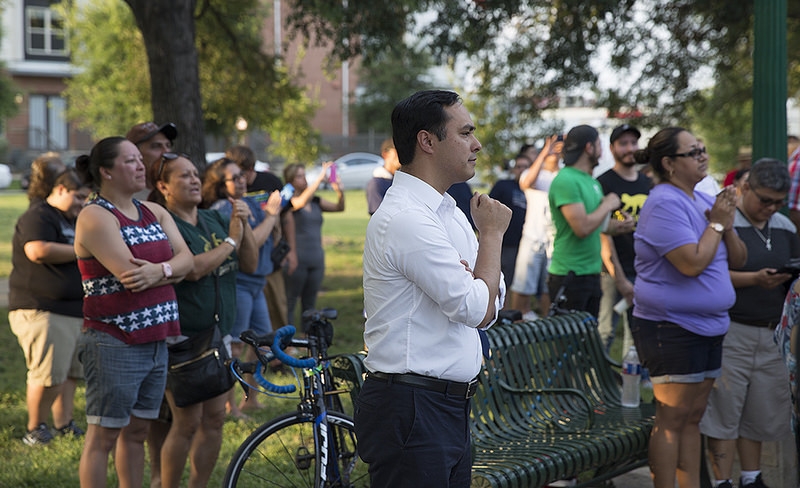