San Antonio Police will have to rewrite the manual for SB4

If a federal judge does not block the anti-immigration law, San Antonio police will have to write new rules in the manual and retrain the force in immigration law, Police Chief William McManus told members of COPS/Metro Alliance.

Senate Bill 4, the “sanctuary cities” ban, allows local and campus police to question a person’s legal status and makes it a crime for officials such as McManus to have policies that are inconsistent with the law.

“For years the unwritten (SAPD) rule was you don’t ask about a person’s immigration status,” McManus told the group of 60 people gathered at Sacred Heart Church Aug. 21. “In 2015, that unwritten rule  became a written rule,” he said.  Right now, San Antonio police now only call federal immigration officials in the case of human trafficking or smuggling, McManus said.

But if the anti-immigration law goes into effect Sept. 1 as scheduled, he said, that page in the current manual will have to be pulled out.

San Antonio, Austin, El Paso, Dallas, El Cenizio and other Texas cities filed suit in federal court to block the law. Among other things, they argue the law coerces local officials and police to become de facto agents of the federal government to enforce immigration law.

“We hope the (court) ruling will be out this week. I feel in my gut that we will prevail,” McManus said.  McManus and police chiefs across Texas have been vocal opponents of SB4, which they say will harm public safety. (See more articles on SB4 here.)

COPS/Metro Alliance, a community advocacy organization, hosted the meeting with Chief McManus to learn about how the city police will apply SB4 if it goes into effect.

Juanita Guardado, meeting co-chair, said the immigrant community is fearful and anxious to learn how the police will implement SB4.  “What  are the sentiments of the police on SB4? In the event the law goes into effect, we  want to know what awaits us,” she said.

COPS/Metro Alliance have proposed using municipal IDs to overcome the obstacles faced by undocumented individuals to access services such as opening a bank account, visiting a doctor, and obtain birth certificates.  Los Angeles and  New York are among the cities mentioned that have municipal ID cards.

For instance, to obtain a birth certificate for their U.S.-born children at the Vital Records Division, undocumented parents are required to show a government ID, said Rachel Salazar, COPS/Metro member and former President. She said the municipal ID would help parents with such obstacles.

“I think it’s complicated,” said Juanita Regina, noting that information gathered for a municipal ID could potentially be shared with other government agencies.

McManus said municipal ID cards could be made available to all city residents to avoid identifying a person as undocumented. 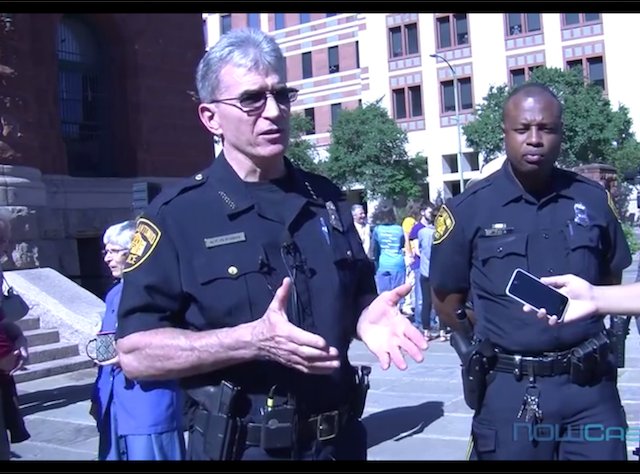