San Antonio teams up to bridge digital and economic divide

After dozens of local leaders donated time and ideas to launch ConnectHome and bring high-speed Internet to low-income families, San Antonio Mayor Ivy Taylor laid out the long odds and the tall challenge ahead.

A child born in a poor census tract today "has less than a 1-in-20 chance of escaping poverty," Taylor told the group.

Among San Antonio's poorest residents, fewer than half have high-speed Internet at home, meaning children can't access instructional videos to do their homework or apply for college, adults can't connect with jobs, education and training, and those with limited mobility can't access life-prolonging resources and cultural and social activities.

"The internet is not a luxury, it's a necessity," President Barack Obama said in July when he and Housing and Urban Development Secretary Julián Castro announced ConnectHome, a demonstration project to bring high-speed home Internet to public housing families in 28 cities including San Antonio. (see NOWCastSA's earlier article and video on ConnectHome here. )

A report issued by HUD paints a graphic picture of the digital divide in San Antonio: 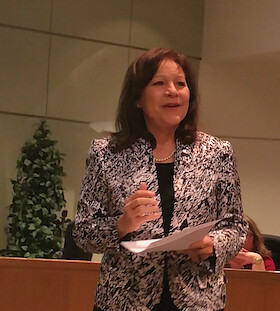 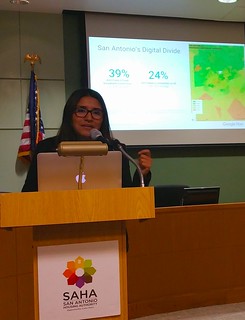 Research data showing 39 percent of San Antonio residents do not have fast broadband and 24 percent "don't have an Internet connection at all." (see more data resources here)

It's time for that to change, said Leilah Powell, the mayor's Policy Chief. "San Antonio long ago said people need running water, sidewalks and streets," she said. "Now it's the Internet. If you don't have high-speed broadband, you will be left behind."

Powell kicked off the brainstorming session by challenging the group to come up with scalable ideas that will work for "100 people here, 1,000 people there and 10,000 people over here."

Participants were asked to explore three areas of digital inclusion: get Internet into homes, get devices - computers and tablets - into people's hands, and to explore digital literacy, or ways to educate people on how to use the devices and the Internet.

Compounding that digital literacy challenge, Powell said, between 10 percent and 20 percent of San Antonio residents cannot read. "How do you help them learn to use computers?" she asked.

"This is one of the most important things you can do for San Antonio," Powell said.

Learning from other cities' experience is key.

Austin, was named a "mentor city" in the ConnectHome program because that city is so far ahead in trying to achieve equity with technology, as this article in the Austin Chronicle explains.

Catherine Crago with the Housing Authority of the City of Austin, and its digital inclusion foundation, Austin Pathways, said broadband was prohibitively expensive for public housing residents before HACA, Google Fiber, Austin Free-Net and other local groups got together to provide free Internet, devices and digital literacy training in 2014. 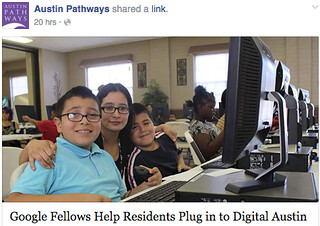 "We found that residents spent 60 percent to 70 percent of their discretionary income on Internet," in some cases cuting back on necessities like utilities to pay for broadband, Crago said.

Under Austin Pathways, residents can "earn" their own computers that come with 32 gigabytes of educational software, including Khan Academy instructional videos (see the Khan Academy video library here). The material comes prepackaged from Rachel.org (more on Rachel.org here). Crago said helpers in the tech community have used small and affordable Rasberry Pi technology (more about Raspberry Pi here) and open source Linux (more on Linux here) to expand flexibility and keep costs down.

People in Austin accept the fact that not everything goes right the first time.

Crago said the group told public housing residents: "You are the digital inclusion pioneers. The pioneer road is bumpy. We need your help."

Juanita Budd, Executive Director of Austin Free-Net, a nonprofit that has provided computer training and access since 1995, said those trying to help must also listen to what people need. "Adults don't care about computers unless it is relevant to them," said Budd. "They want to use it understand it and create something else."  (More about Budd's work and Austin Free-Net in this Austin Chronicle article.)

JoAnna Alvarado, Director of Information Technology at SAHA, said she sees the urgent need every day as children crowd in, two and three to a chair, in front of the few public access computers available in community rooms in public housing.

"We're starting with the idea of failing fast and failing small, because we want to learn fast, learn big iterate, improve," said Milk.

"ConnectHome is about pubic housing, but it's part of bigger picture," he said 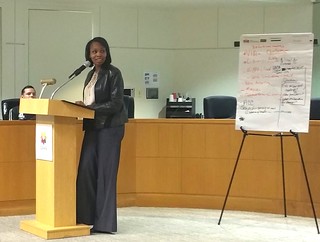 The Mayor agreed. "Our coming together here in San Antonio...can help ensure that new devices and faster connections don’t increase inequality but rather help us eliminate it," she said.

"This is not just because it’s the right thing for us to do, but because eliminating the digital divide will make us more competitive as a region and as a nation," Taylor said.

"We will change families' lives."

Editor's note: NOWCastSA's Managing Director, Charlotte-Anne Lucas, was asked by the organizers to attend this meeting as a participant in the brainstorming. 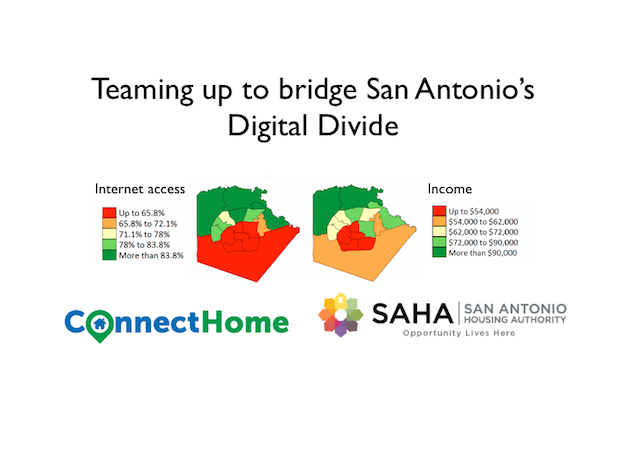