The ousted author of a study that describes a controversial San Antonio water supply project as “high risk” squared off with the head of the city’s water utility Wednesday, questioning — among other things — whether an extra 16 billion gallons of water per year would diminish the city’s pioneering water conservation programs.

San Antonio’s most recent water management plan suggests that such programs will cease in 2020, said Calvin Finch during a panel discussion moderated by The Texas Tribune's Neena Satija. The former San Antonio Water System employee’s last assignment at the Texas A&M Institute of Renewable Resources was a city-commissioned study examining its long-term water supply that at times describes the $3.4 billion Vista Ridge project as “innovative” and important to the city’s water future, but also one that could be detrimental to the water supplies of surrounding communities.

Finch, a former conservation director at SAWS, pointed out that 2020 "coincidentally is the exact same time we’re expected to get the Vista Ridge water. Why shouldn’t we be nervous about that?”

Whether the Vista Ridge pipeline will soften the city’s efforts to encourage residents to use less water is just one of a variety of concerns that have surfaced ahead of the city council’s vote — set for next month after delays amid renewed criticism of the project — on a water rate increase to help pay for it. One fuel for those critical flames was the city’s decision to delay releasing Finch’s critical study, a draft copy of which says the project could be perceived as the city “ignoring the interests of its rural neighbors ... so there is water for new San Antonians to water their lawns.”

Puente, a former state representative who has headed SAWS since leaving the Legislature in 2008, dismissed all concerns during Wednesday’s panel on the University of Texas as San Antonio campus — from the potential drawdown on the Carrizo-Wilcox Aquifer and the two rivers that feed into it to potential cost increases for customers if Abengoa, the Spanish company building the pipeline, ends up defaulting.

If the pumping does impact the aquifer, Puente said the local water conservation district will be able to pull the plug. And if Abengoa defaults, SAWS — which would collect a $2 million penalty — could find another private sector partner or take over the project itself with little to no impact on ratepayers.

As for conservation efforts, Puente said the city — known as a leader in water conservation — will forge ahead and that it would’ve needed three Vista Ridges by now if not for what it’s done with conservation in the past. He and Finch agreed that enhanced conservation alone would not meet the fast-growing city's water needs, but other panelists — one from the Greater Edwards Aquifer Alliance — questioned whether Vista Ridge was the right way to meet them.

If San Antonio doesn't end up needing all the water it gets from Vista Ridge, Puente said it could end up selling off some of it to surrounding communities but that "nobody's really interested until it's been signed, sealed and delivered."

"In the position I sit here today, somebody 20, 30, 40 years ago made commitments to make my life easier either through education, through highways, through water, through a lot of things," Puente said in a closing statement. "And that’s what I’m trying to do today is do certain things that will benefit this community in the long run."

The project, which the city council unanimously approved last year, will pipe in 50,000 acre-feet of groundwater every year to San Antonio from Burleson County in Central Texas, about 142 miles away. SAWS and many of the city's business leaders say it is key to a secure water future for the nation’s seventh-largest city, but environmental advocates and other critics hotly dispute that notion, saying the city doesn't really need the water and that the project is far too costly and financially risky.

Wednesday’s discussion came as some city council members are having second thoughts about the project as new information comes to light.

In August, Moody's said it was considering downgrading Abengoa's credit rating, which already is high risk. The company also was recently hit with a class-action lawsuit alleging that it misrepresented the state of its balance sheet to investors.

On top of that, scientist George Rice released new data claiming that the Colorado and Brazos Rivers — two key water sources for many of Texas' major cities that are partially fed by the Carrizo-Wilcox aquifer from which Vista Ridge will be pumping — could see diminished flow as a result of the project, though Puente recently disputed the accuracy of the report, contending that "the data is wrong."

During a question-and-answer-session after Wednesday’s panel, Rice noted that SAWS hadn’t conducted its own analysis of what kind of impact pumping could have and asked Puente if he thought that was an important thing to do.

“Well, yes, and you did that already,” Puente quipped, later reiterating that if pumping adversely affects the aquifer, the local groundwater conservation district can pull the plug.

This article originally appeared in The Texas Tribune at http://www.texastribune.org/2015/10/22/san-antonio-water-utility-leader-defends-vista-rid/.

You can listen to the entire panel discussion here: http://tpr.org/post/san-antonio-water-utility-leader-defends-vista-ridge#stream/0 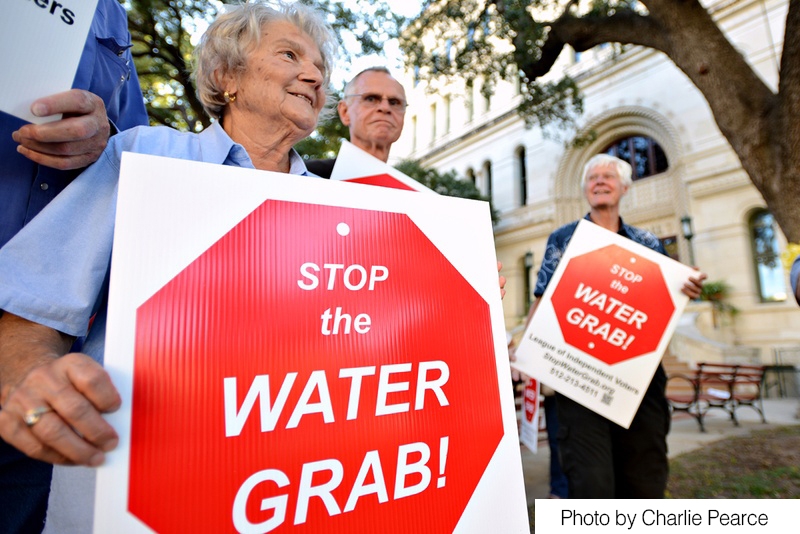