San Antonio's Luminaria 2012 will be webcast to the world

If you have Internet, it doesn't matter where you are: you can go to Luminaria 2012 with just one click.

Beginning at 6:45 p.m. on May 5, NOWCastSA will webcast the arts festival, Luminaria 2012, live, simultaneously from three places in San Antonio's HemisFair Park.  Watch the webcasts live or later on NOWCastSA.com at http://nowcastsa.com/luminaria-2012.

NOWCastSA's work is made possible through underwriting from Rackspace Hosting. For the second year, Rackspace is Luminaria's title sponsor. Time Warner Cable is generously providing Internet connectivity for the webcasts during Luminaria.

From the Instituto at Stage 12, NOWCastSA will webcast San Antonio's Poet Laureate Carmen Tafolla to a mobile device in your hand and to a country around the world. The webcast from this intimate theater will continue through the night with Matari Productions, Sarah Sanchez and Ana Baer, Vincent Hardy, Crawling With Monsters and Erica Anthony.

We'll also be webcasting live at the far end of the park, near the Institute of Texan Cultures at Stage 6 and Stage 7 from 7 p.m., when the Mariachi Infantil de San Antonio performs, through the Youth Orchestra of San Antonio (YOSA), until the Finale SA Music Lights the Night from midnight to 1 a.m. with emcees Mellissa Marlowe and Vincent Hardy and performances by Henry Brun & The Latin Playerz Orchestra, Augie Myers, Paul Elizondo, Lisa Morales, Hank Harrison, Bett Butler and Spot Barnett.

We will be webcasting a third stream live from near the Rackspace Installation, giving you on-the-spot interviews, updates of video from exhibits across the park and a view of Stage 5, featuring performances by Mission City Klezmorim, Jonny Martinez y Grupo Bravo and the April Hall Band.

If you are in the park, make sure to check out Rackspace's special mobile guide to the event, Luminaria Live. For a complete lineup of artists and locations, see the map below and check http://luminariasa.org/ for more information.

According to our analytics, the Luminaria 2011 webcast was viewed by people in 119 cities in the U.S. and 12 other countries: Canada, New Zealand, Italy, Portugal, the United Kingdom, Germany, Australia, Denmark, Malaysia and Mexico. Nearly 600 individuals in San Antonio watched the live webcasts.  To date, the Luminaria 2011 page has garnered more than 1,000 unique pageviews. 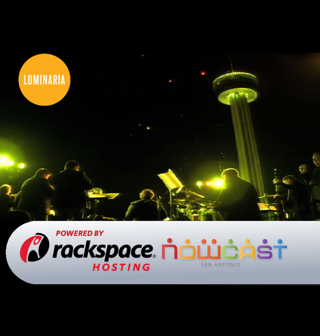