San Japan celebrates otherness with inclusion, diversity and magic heroes who can save the world 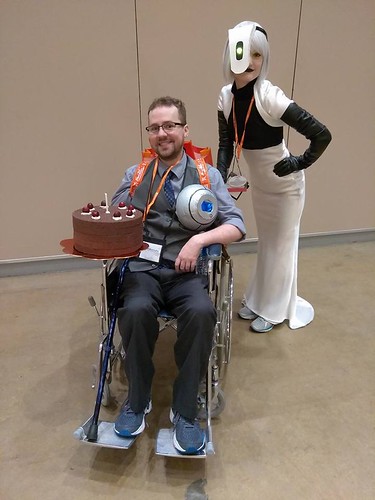 San Japan, the ever-popular San Antonio celebration of Japanese culture and anime, manga and gaming, is gearing for its 11th iteration over Labor Day weekend.

With each passing year, San Japan is proving it’s more than a fun place where cosplayers, gamers and artists of all ages and backgrounds can demonstrate their skills and share their love of anime and manga.

Aside from dozens of panels, workshops, concerts, contests and gaming, there will be more than 100 vendors and 250 regional artists, and appearances by internationally renowned artists, voice performers, and musicians.
This year there even more panel discussions, workshops and events addressing issues of inclusion and diversity of race, gender identity, sexual orientation and self-image in the community.

"Anime, as a medium, celebrates 'otherness,' " explains San Japan community relations director S. David Ramirez. "Anyone has the power to save the world, find true love, and tap into the creativity within. This is what draws such a diverse community to San Japan. Race, gender, sexual identity, ability, and socio-economic status are not divisive traits in worlds inhabited by giant robots and magical heroes."

This year, one panel will cover the history of LGBTQ representation in anime and manga. Fans, as well as industry artists and writers often point to how LGBTQ is embraced through a variety of series, such as Sailor Moon, My Brother’s Husband, Rose of Versailles, and Yuri on Ice.

A second panel is titled “What Anime Can Teach Us About Depression And Mental Illness.” An increasing number of anime series have come to tackle different types of mental and emotional challenges in an honest, non-exploitative way.

A third panel will address LGBTQ representation in the superhero genre. While LGBTQ characters are rare in superhero-centric literature, shows and films, particularly mainstream works, traditional powerhouse comic book producers such as Marvel and DC have pledged to introduce more LGBTQ individuals.

But lesser-known and independent artists and companies, however, have been doing better in this role.

A fourth panel will discuss the art of burlesque, how it changes one’s view of self, and how it’s not all about sexuality.

A fifth panel is about cosplaying as a person of color. Many cosplayers of color are fighting stereotypes and a form of hesitation they experience from some people who think their favorite hero/heroine should be portrayed only according to the character’s skin color.

Then there are instances, highlighted in social media, where an individual - say, a white person - cosplays in blackface, sparking controversy.

San Japan has built a reputation as a fan-driven convention that embraces community charities.

Like in previous years, the show will feature an SJ Cares booth in the convention registration area, where assistance will be available for disabled attendees and visitors who may need safe space.

This program includes a reminder to all visitors on how to properly acknowledge service dogs, which are allowed at the convention.

San Japan will partner with the South Texas Blood and Tissue Center and Doctor Who Fans Unite to conduct a blood drive during all three days. Donors receive a voucher for a free Bill Miller Bar-B-Q and the chance to win convention swag. The blood drive will take place all three days of the convention in the vendor's room (Hall 3). Walk-ups are welcome. Register at: https://southtexasblood.org/DoctorWho.

There also will be silent and live charity auctions benefiting disABILITYsa and the UTSA East Asia Institute.
Additionally, Be the Match will help people register for the bone marrow registry, and MOVE Texas will conduct voter registration outreach.

In 2017, a few San Japan panel discussions touched upon how the community of anime/manga/gaming fans try and ensure everyone feels accepted and welcome, regardless of race, sexual orientation or identity, or disability.
Southern Cospitality, an Austin-based cosplay group, discussed how the LGBTQ community has been portrayed in anime and manga over the decades.

A second panel addressed positivity and support in the cosplay community. Speakers talked about how cosplay allows an individual to explore their artistic side in a safe, non-judgmental way.

In a third panel, members of Non-Visible Nerds with Disabilities shared stories and tips for individuals living with physical or emotional challenges.

Most San Japan activities will be held at Henry B. Gonzalez Convention Center, but others will take place at the Grand Hyatt and Marriott Riverwalk hotels.