About 75 San Antonians carried Libyan flags and posters in a demonstration in support of Libyan people who are protesting against leader Muammar Gaddafi.

The group of men, women and children, some of whom said they were of Libyan descent, chanted and paraded on the sidewalk in front of the John H. Wood Jr. U.S. Courthouse Building on Durango Boulevard.

In this video, see interviews with participants including Mansour El-Kikhian, Libyan and Chair of the Department of Political Science and Geography at the University of Texas at San Antonio, along with Howaida Werfelli, the group's organizer.

In Libya, protesters reported that hundreds of anti-Gaddafi demonstrators were brutally killed by government forces. Foreign journalists just arrived in Libya on Friday and are sending out reports confirming that protesters have won control of cities in the Eastern part of Libya, sometimes with the help of defecting soldiers.

For the latest news on the protests visit: http://english.aljazeera.net. 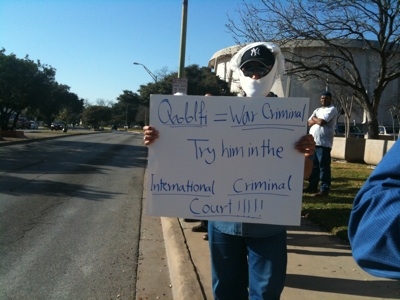