Second Saturday is a great occasion to catch up with friends and acquaintances, listen to multiple DJs spin tunes, grab some munchies from a food truck, have a beverage and above all, check out the art.

As a recent visitor to San Antonio put it, “We don’t have anything like this in Austin. This event is so great because it’s primarily about the art.” 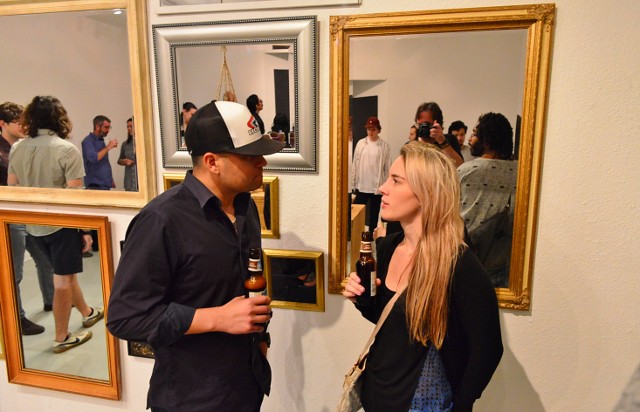 Located in a cluster of warehouses on or near S. Flores St. between E. Lachapelle and Lone Star Blvd., this art district has grown over the years both in size and popularity. Fortunately, the basic nature of the event has not changed. It is still very much artist-driven, due in large part to the fact that the buildings are owned by artists. In other cities, events like this have died away due to increasing rents and gentrification.

One example of this is Lone Star Studios, owned by artist Bill FitzGibbons. His building consists of a number of smaller spaces that are rented out as studios and galleries to other artists, such as Daniela Riojas. When not hosting her own shows, Riojas invites other artists to exhibit in her space. This month, it was At An Angle: New Works by Nicole Geary.

In the courtyard there was an altar in memory of artist Michael Witzel, who recently passed away unexpectedly. He was a well-liked fixture in the local arts community for more than 20 years, a gregarious figure who was frequently seen at events such as this.

 Also located at Lone Star Studio, FitzGibbons’ Dock Space Gallery featured As If Something Had Its Own Place, featuring the intricately drawn works of Diana Casanova and Michael Aaron Williams. Casanova, who was not able to attend in person, utilized Skype in order to provide a virtual presence. At the adjacent Lullwood Group space, the other-worldly sculptural works of Dan Lam took an entirely different direction. Nascent Nation was mesmerizing in all its super fly fluorescence.

Around the corner is the 1906 S. Flores building, owned by Andy and Yvette Benavides for more than two decades. The building is a virtual maze of spaces, with surprises lurking around every corner. Out front is a spacious patio area where a DJ plays and a food truck serves up tasty offerings.

Located at one end of the 1906 building is Shek Vega’s Gravelmouth Gallery. Since Vega is a muralist, his gallery often features large-scale works. This month had works both large and small, but it’s really hard to miss something as big as the wall upon which it is featured. This month’s theme was Second Sabado Gigante, featuring Chris Montoya, Larry Servin and Zeke Peña.

The central area of 1906 was dominated by StyleLush TV. The large political-themed mural called out the over-the-top garishness of the current climate, and was camera ready to capture everyone’s street style. Seek out #StyleLush to check the buzz. Zollie Art Glass manned their regular pop-up spot, highlighting the work which is produced by multiple artists in their studio located on the other side of Southtown.

But, wait! There’s more! The rest of the building was inhabited by exhibits in other spaces, including SMART projectspace, AP Art Lab, and Studio Fantomas. At Providence Gallery, Jenelle Esparza made a departure from her outstanding photography with a mixed media installation, Lucre. Esparza is a recent recipient of a NALAC grant to continue her work on Latinos in the cotton industry during the 20th century.

Across the street is Freight Gallery & Studios, formerly Gallista Gallery, owned by Sergio Martinez. Although it is currently under renovation and appeared dark from the front, the gallery space in the rear of the building was occupied with Shared Space: New Works by Carol Turner. Turner is a principal in the artist-run collective Clamp Light Artist Studios and Gallery, located in the Beacon Hill neighborhood. A tour of the Freight building, provided by Martinez, revealed the job is actually close to completion.

At this point, it’s time to cross the railroad tracks on Flores and pay a visit to Dorcol Distilling Company, which produces a Serbian liquor called Rakia, along with their house-brewed High Wheel beers. The bar is always packed with people seeking bespoke Rakia cocktails, and the patio is filled with people jamming to the retro tunes the DJ is spinning. Inside the building were works by Ana Hdz-Burwell, along with several vendors selling all sorts of arts and craft-oriented items.

Second Saturday serves as a monthly showcase of San Antonio’s vibrant and growing contemporary art scene. Be sure to check it out, every month on the second Saturday, usually between 7 p.m. to 10 pm.

*Tami Kegley contributed to this article. 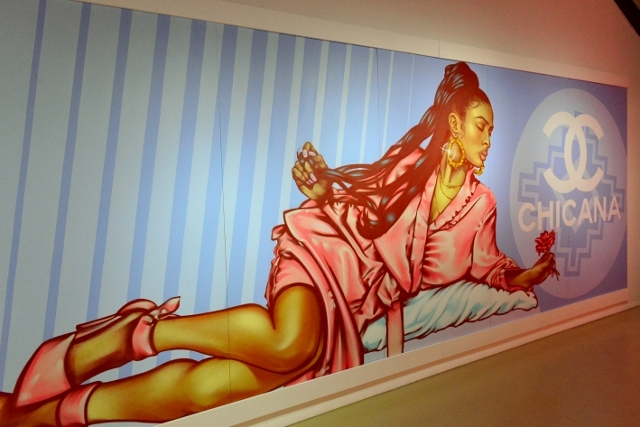