The City of San Antonio is asking residents to provide feedback on the Fiscal Year 2017 Proposed Budget through the #SASpeakUp campaign. More than 5,000 residents helped shaped the budget by offering their feedback earlier this year.

"Our proposed City budget directly impacts the lives of so many families, and now that we have shared details of it, we want to hear from those families,” said Mayor Ivy R. Taylor. “I urge San Antonians to make their voices heard. After all, we are your City government and this is your money we are investing in our community."

“San Antonio residents play a vital role in determining our budget, and my proposal is a reflection of their priorities,” City Manager Sheryl Sculley said. “This year, we’re planning for the future with the implementation of the SA Tomorrow Comprehensive Plan, infrastructure and public safety — all without raising property taxes.”

There are several community-wide opportunities for San Antonio residents to participate in the budget process. Residents can share their feedback and ideas in-person at one of five upcoming Community Open House events.

Click here for details on NOWCastSA's live webcasts of all five meetings.

The #SASpeakUp campaign provides multiple avenues for residents to share what they would like incorporated in the FY 2017 Budget and includes a short survey available in both English and Spanish at SASpeakUp.com. The survey will also be available at City libraries and senior centers. Another convenient option for San Antonio residents to speak up about their budget priorities is through the hashtag #SASpeakUp.

San Antonio residents are asked to SpeakUp! Be a part of the process that shapes the City’s financial future and enhances the community’s quality of life. 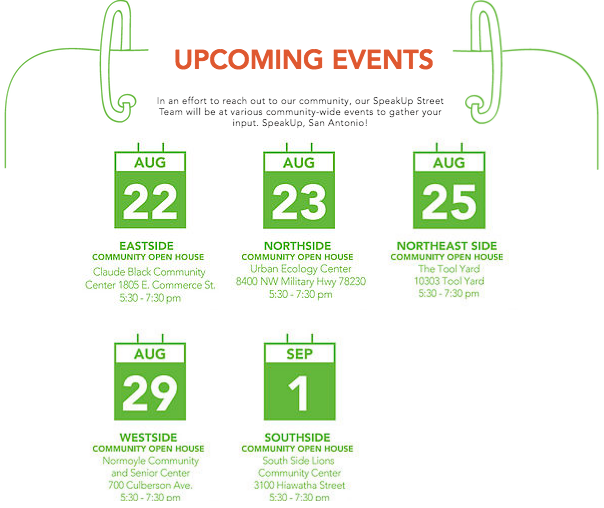