Starbucks and Goodwill Industries of San Antonio commemorated the one-year anniversary of a unique partnership in support of veterans by unveiling plans for a new mural by distinguished, local artist Jesse Treviño. (See photos from the event below).

The public art piece has been commissioned by Starbucks in honor of military heroes. It will be located at the Starbucks Veterans Community Store at 8227 State Hwy 151 in Westover Hills.

“We are so very excited that Mr. Treviño will be creating a vibrant piece of art honoring veterans,” said Marla Jackson, President and CEO of Goodwill San Antonio. “This will be a place where the community can find inspiration from art showcasing heroic work of men and women in the military.”

In November 2013, Goodwill and Starbucks entered a partnership to assist veterans and their families in finding work through employment and education programs. Ten cents of every transaction at the Starbucks Veterans Community Store supports Goodwill San Antonio’s Veterans Outreach Programs.

Plans for the mural were unveiled at a celebration event on Dec. 15 at the Starbucks Veterans Community Store. Elected officials joined artist Treviño to announce the location for the art piece and unveil a panel with reproductions of his earlier work.

The art piece commissioned by Starbucks will be completed over a number of months. A temporary “placeholder” with the panel of previous art and information on Treviño’s military service will be displayed until he finishes the new work.

A Vietnam War veteran, Treviño has spent his life honoring the city he loves through the creation of breathtaking images that reflect the culture and people of his native San Antonio. His murals can be found on hospitals, parks and other public and private locations across the Alamo City.

San Antonio’s Starbucks Veterans Community Store employs seven partners who are military spouses, active duty or veterans themselves. The partnership between Starbucks and Goodwill is part of Starbucks’ strategic commitment to develop a comprehensive hiring platform for veterans and active-duty spouses.

Starbucks has focused on establishing an internal infrastructure to support at least 10,000 hires nationwide by the end of 2018. As part of this initiative, Starbucks will be opening a total of five Veterans Community Stores to help fund local nonprofit programs that support veterans re-entering the workforce.

Also in 2014, Starbucks supported Goodwill’s launch of a Veterans Assistance Center at the Goodwill store at 3730 N. Loop 1604 E. at Bulverde Road. Programs and services are tailored to veterans and their spouses.

Starting in 2015, Goodwill’s Veterans Assistance Center team will be on-site at the Starbucks Veterans Community Store at 8227 State Hwy 151 to assist veterans and their families.

Visit goodwillsa.org to learn more about training and services available to veterans. 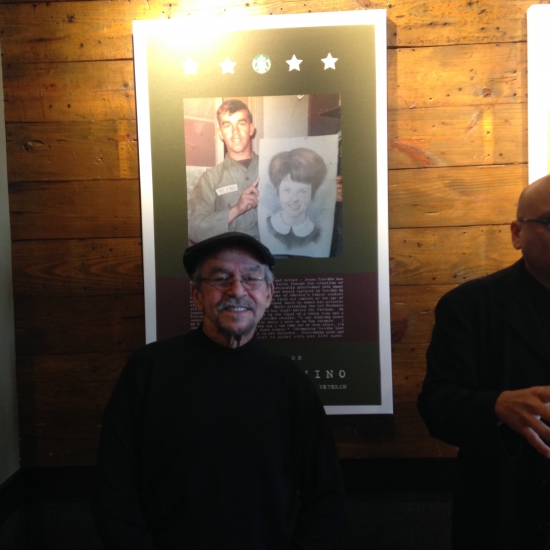