State Rep. Bernal pulls out of South by Southwest panel

Editor's Note: This story has been updated throughout due to breaking news.

State Rep. Diego Bernal has withdrawn from participating in a panel discussion at South by Southwest, the annual Austin festival that begins Friday.

The San Antonio state lawmaker was slated to discuss how state governments have been attacking legal protections for the LGBTQ community, such as Senate Bill 6 - the so-called “bathroom bill,” which the Texas Legislature is considering now.

But Bernal announced on Monday, March 6, that he would not take part in this year’s conference due to his disagreement with SXSW artist contract policy.

Festival organizers have drawn the ire of a few participants and outside groups. Contactual language calls for immigration authorities to get involved if an artist or immigrant from abroad is found to be performing in an unofficial SXSW event.

“I will not in good conscience participate in a festival that uses the threat of deportation as part of its business practices,” Bernal said in a news release.

Bernal is one of many Texas Democrats who have criticized SB6 as being discriminatory and a distraction from more substantive issues affecting the state.

Bernal said SXSW officials informed him they plan to revisit and amend their artist contract policy but not until after this year’s festival concludes. He said he would help with that effort if possible.

“That said, I should not have to make a choice between standing against coercive immigration policies and participating in a panel on LGBTQ issues, between one person’s human dignity and another’s,” Bernal said. “I am disappointed to be forced into a choice to step away from a gathering that, at its best, brings so many artists and people together."

Several bands that have been slated to play at this year’s SXSW signed an open letter to organizers, demanding they remove two controversial clauses from their performance contacts. One New York musician canceled his band’s scheduled showcase.

One clause is about international artists performing outside SXSW showcases. The other provision says immigration officials could act if artists perform in a way that “adversely impacts the viability” of their official showcase event.

SXSW organizers issued a press statement, saying the verbiage in question has been in place since 2013. The clauses, the organizers said, help to facilitate international artists, and demonstrate to the federal government that the event takes seriously visa issues.

UPDATE: SXSW organizers did issue another press release Tuesday, March 7, saying they would pledge rid the artists' contract of the controversial verbiage come 2018. When reached for comment the next day, Bernal said he would still not participate in this year's conference and that his stance remains the same.

The state lawmaker said, despite conference organizers' promise to delete the contract language, the Trump administration's actions have increased fear that undocumented immigrants could be deported at anytime, from anyplace, not just SXSW.

"The threat of deportation is very real. People are much more sensitive to this issue," he added.

With all that said, organizers said SXSW has never reported any performers to immigration authorities. They added the festival “opposes discrimination of any kind, and has taken a public stand against President Trump’s travel ban and proposed legislation like SB6 in Texas.” 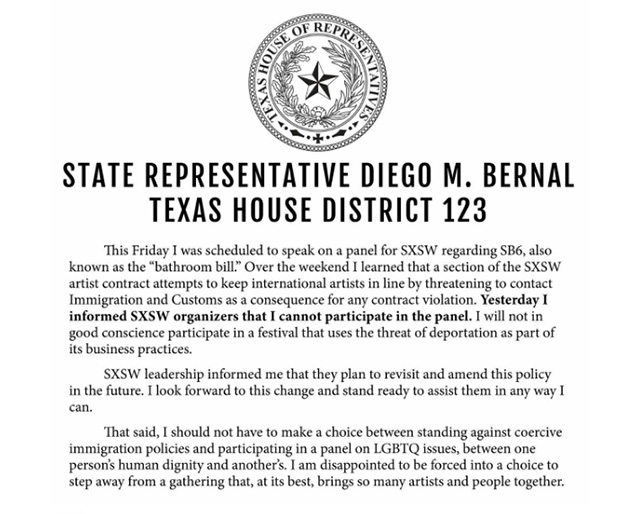