SAN ANTONIO (July 9, 2015) — “Slavery and the Civil War are part of the American legacy. For more than 200 years we’ve been trying to fully realize the revolutionary premise of democracy: all men are created equal.

Selectively erasing pieces of our past may make it more comfortable for us today but it also makes it easier for many to ignore the historic struggles of Blacks and other minorities in this country, a struggle for equality that continues today. It is offensive to use the rebel battle flag as a symbol of a city or state but it is also offensive to pretend that Texas was never a slave state or that racism has played no role in our history for the past 150 years.

The City Manager has already directed staff to identify any monuments connected with Confederate history or symbolism and I will be receiving that report shortly, after which time the appropriate staff or Council committee can consider opportunities for expanding interpretation at these sites.”

Councilman Gallagher states the following (via Twitter, July 10, 2015): “I understand the position of those who are advocating removing the Confederacy from our past, however, I believe that we need to have a careful and reasoned examination of this topic.

As a community, we need to remember the past and those who have sacrificed their lives for a cause they believed in. If we erase those lessons, we are at risk of repeating the intolerance and horrors that the Civil War taught us.

Therefore, I welcome a dialogue on this issue, but caution any action in removing the Confederate monuments in question.”

Councilman Warrick opens his memo to his Colleagues stating, “It often takes an unspeakable tragedy to perpetuate changes in policy and customs of society. We are currently seeing this unfold in communities and states across the nation.” Councilman Warrick asks his colleagues to join legislative chambers throughout the country who are currently reflecting on their association with divisive symbols of the Confederacy, including the battle flag and monuments erected on public property.

Here in San Antonio, most notable is the prominent Confederate monument placed centrally in Travis Park located in the heart of our downtown. Travis Park is one of the oldest municipal parks in the country. The focal point of Travis Park is the Confederate Civil War Monument. According to the Office of Historic Preservation, the monument honoring the “Confederate Dead” was erected in 1899 and funded by the Barnard E. Bee Chapter of the Daughters of the Confederacy.

“I do not believe the vast majority of residents who support Confederate flags or monuments have hate in their hearts. The fact that some of these symbols are utilized by hate groups to harass and intimidate should be enough to give us pause,” Warrick expresses.

The memo filed in the City of San Antonio Clerk’s office today concluded with a challenge from Councilman Warrick: “I hope as San Antonio’s leadership, we will move to discuss this topic swiftly, so that our City can continue to achieve its mission as a City on the rise for the new face of America.” 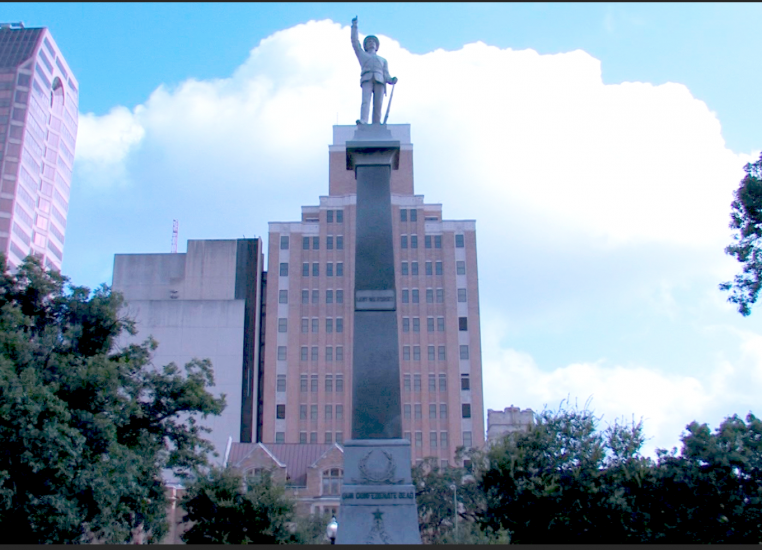