“Stories Seldom Told” is an annual Say Sí event where student artists explore topics in need of the telling, in need of being unpacked, in a creative manner.

“Every year, all of our student leaders will get together and have informal conversations about what they feel isn’t addressed in their everyday lives,” said Stephen Guzman, Communications Director, at Say Sí.  “Each studio has a lead liaison (student leader) that provides feedback and informs programming, and one of their tasks is to come up with the theme for Stories Seldom Told.”

This year’s topic, democratically chosen by the students, concerns stories omitted from history, marginalized, or erased all together: stories of a village named Yanaguana, prior to when the area was colonized by the Spanish, and stories from neighborhood known as German Town, before it was demolished by Hemisfair.

“What the Spanish coming into this area did to the indigenous populations is also being explored in this exhibition, said Guzman. “Disease, population displacement, being forced into the Mission lifestyle, there’s just so much our students wanted to dissect within our history, but also, take what they learned and make it into art.  And so the end goal for each of their projects, the research that they do, will be a multi-disciplinary installation.  It’s not just a two-dimensional artwork, it’ll be an installation that will incorporate a little bit of video, text,  and performance art.”

Students from several disciplines and their respective programs, such as visual arts, new media and performing arts, collaborate to create works, many of which are mixed media creations, several interactive, in an effort to shed light on the stories.

Watch this Say Si Facebook Live video from the May 24 student artist discussion about the project.

One piece, “San Antonio’s Omitted Histories Timeline”, occupies two walls of a hallway and invites the visitor to “Explore our timeline of San Antonio’s 12,000 year history.  Some events make up the official history of San Antonio represented in blue.  Other events, represented in brown, are those that we consider to be omitted histories.  Note that some descriptions are subjective, compiled from research, archival records, and oral histories.  Learn the full story behind these omitted histories in the student installations throughout the exhibit.”

A great counter-balance of traditionally taught history, follows in blue: “Before 1500: Prior to the arrival of the first European explorers, indigenous people, including the Payaya, a Coahuiltecan tribe, inhabit the area of present-day San Antonio, calling their village Yanaguana.”

Now the opposite end of this balancing act, represented in brown, shows us a cruel history: “1718: The San Antonio missions were founded by Spanish colonizers who sought to defend, settle and expand their frontier.  These missions offered food and refuge to the Coahuiltecan in exchange for their religious conversion and labor.  The Coahuiltecans were forcibly assimilated to the European lifestyle and were expected to leave behind their Native cultures.  Many were killed by the measles epidemic.  Learn more in the installation,’Augmenting San Antonio’.”

This one of the few Tricentennial events that explores difficult subject matter.  Subjects such as the demolition of past historical buildings, erased but alive in the memories of an older generation, or the history of displaced families in order to make room for Hemisphere park; the demarginalization of African-American women artists in the Alamo City; immigrant narratives; or the hidden histories of many historical buildings in town- The Koehler House, with a sordid back story seldom told (The Three Emmas), practically unknown, is one such story.

One mixed media piece that addresses erasure on a large scale is “The Future is Fair,” a neighborhood once known as German Town, an ethnically diverse burg, is demolished to make way for the 1968 World’s Fair which itself touted diversity as we are informed by accompanying literature.  Irony indeed.

The burg is scaled down to model size bass-wood houses created in situ, accompanied by photos on the surrounding walls augmenting the installation.

“Stories Seldom Told: Omitted Histories” will celebrate its closing June 1 from 6 p.m. to 10 p.m., when the installation will then have its ultimate purpose invoked:  the audience will be asked to symbolize the authoritarian action taken by the city in its displacement of 2,229 residents, 686 businesses, and the destruction of 1,349 structures; all this to usher in another story.

Lead student-artist Wiley Martinez points out another injustice by city leaders: “People were not really compensated well for their homes..so we recreated the neighborhood and thought, ‘Why don’t we let the patrons of the exhibit destroy it themselves?,’ “ and thus was born the idea of interactive patron destruction, of which was Martinez’s original idea.

Student-artist Sarah Estrada, explained that another project used oral histories. ”We took it into a performance art piece where the publisher is the Wizard of Oz, he is superior and god-like, but if you look behind that curtain, he’s just a regular man trying to be that overpowering entity,  We had audience members come up and write their personal histories about something important that happened to them, and we would put it through the slide, and with the publisher’s approval it would go into a book binding process.”

The catch, of course - this being a show about omitted histories - was that the Publisher arbitrarily chose what was and wasn’t accepted for publishing.  According to Estrada, children were the most interactive of all the audience members.  Some became incensed with the publisher and began calling him names and even threw trash at him.

Local African-American women artists are represented; a documentary covering the process of this years efforts is being shown; video recorded installations in suitcases, with the ephemera of family members, represents our immigrant history; an installation concerning the mistreatment of our Japanese-American population, prior to World War II hysteria and suspicion; is also covered through the lens of the Japanese Tea Gardens history. 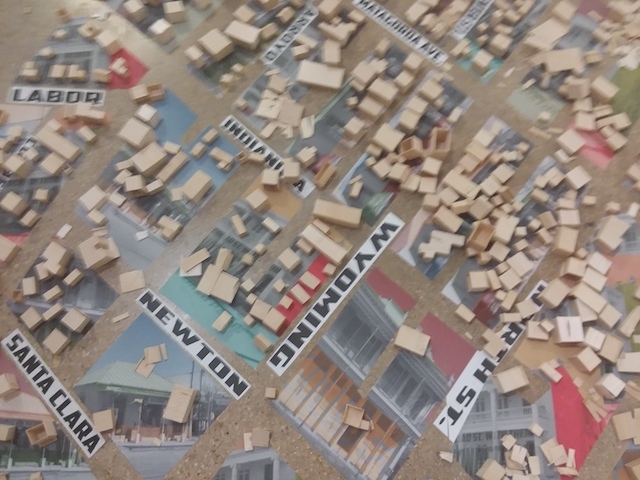