Residents packed the auditorium at San Antonio Central Library Nov. 2 to speak in support of millions of dollars in bond-funded projects to improve the city's largest parks, including Brackenridge, Hardberger, McAllister and the Hemisfair Civic Park.

The meeting was the last chance for citizens to be heard by the Parks and Recreation Bond Committee on proposals for the $850 million bond package that will go before voters in 2017.

Hardberger Park's namesake, former Mayor Phil Hardberger, urged the committee to support the proposed land bridge that would link the two sections of the park that are separated by Wurzbach Parkway. (Hardberger described his land bridge vision to NOWCastSA in this 2014 video.)

The land bridge is the capstone of the Hardberger Park master plan, which the City Council adopted in 2008. It would add one acre to the 300-plus-acre park. "I ask you to complete the park," Hardberger said. "We're like a beautiful house without a roof."

He added the land bridge would encourage more people to come to the park and explore it by foot or bicycle.

Park supporters, including the Phil Hardberger Park Conservancy, said they will leverage the public funds with $10 million in private money. The Voelcker Fund, named after the family that owned the dairy farm-turned-park, has already pledged $1 million toward the land bridge.

Steve Hixon, an environmental businessman, called Hardberger Park "a jewel on the Northside" that is teeming with an increasing number of visitors. Hixon said a land bridge would enable humans and wildlife to safely cross over Wurzbach Parkway from one side of the park to the other.

"Can you imagine the amount of roadkill and damage?" Hixon said, referring to deer and other animals that are occasionally hit by cars on the parkway. Tom Guido, a member of the Hardberger Park Conservancy, said the land bridge would be "a dynamic way to unite the two parks" and would make the park a world-class destination.

Others spoke in support of $7.75 million in proposed improvements at Brackenridge Park.

Those improvements would include repairs to parts of the San Antonio River wall; restoration of the historic upper dam and acequia, as well as the original city waterworks structure; and trail and bathroom upgrades.

Michael Rey, of the architectural firm Overland Partners, said many San Antonians have positive memories of their visits to Brackenridge Park over the years. He said the bond would help preserve historic parts of the park and the river that flows through it for generations to come.

"I want to make sure we're doing the right thing by keeping up with that," he added.

"We need to make sure that asset is well cared for," he added. "Deferred maintenance can be no longer ignored."

Besides $2.25 million for renovations and repairs to Brackenridge Park, the bond proposal would fund $5.5 million to build a parking garage to serve visitors of the park and the San Antonio Zoo. Park Conservancy Executive Director Lynn Bobbitt told the committee that support exists for the parking garage. (Bobbitt talked to NOWCastSA about Brackenridge Park's needs in this video.)

The bond, does not allocate funds toward any specific element proposed in the Brackenridge Park draft master plan, which can be viewed here.

The city is still gathering public input on the draft plan, parts of which had come under fire from several residents earlier this summer. Originally proposed elements in the plan, such as a tram system and a reduction of parking space and some roads in the 300-plus-acre park, were so controversial that a City Council committee voted to remove them entirely from the document. (Watch NOWCastSA's video of that meeting here.)

Other residents spoke in support for improvements at McAllister Park. City staff originally recommended $2 million for upgrades at McAllister to accommodate the arrival of the Capitol Park Little League.

But some park users and advocacy groups argued against clearing land for more ball fields at McAllister. So city staff took that idea off the table, and Capitol Park is working with the city to identify another property for its new home.

The bond continues to have $2 million for general McAllister improvements, but some park users believe more money is needed for the park.

Brenda Gonzalez, board member for the South Texas Off Road Mountain-Bikers (STORM) said her group has partnered with the city to improve certain trails in McAllister Park and hopes to the do the same with a few other city parks.

Laura Matthews, president of Friends of McAllister Park, said her group supports the completion of 2012 bond-funded projects at McAllister. She said several improvements are needed, including replacement of a pavilion, a bike skills area, more trail signage, renovations to the Bee Tree picnic area, and expansion of the dog park.

Katherine Smith said Hemisfair Civic Park and Brackenridge deserve bond support because people from across the city and other communities see both parks as recreational destinations.

Omar Gonzalez, real estate director at Hemisfair, said the new civic park area will be an ideal blend of commercial, recreation, greenspace and residential development in the heart of downtown.

"This is truly a park for everyone," he added.

But resident Amber Garza questioned the proposal to allocate $21 million Hemisfair Civic Park. That money would be leveraged with $18 million in public/private partnership funds, and $20 million from other sources.

Garza said she is disappointed there has not been more discussion about Hemisfair. Se added that the $21 million proposal is disproportionate when weighed against other parks in need.

Cover Image: A scene from Brackenridge Park. Photo by B. Kay Richter. 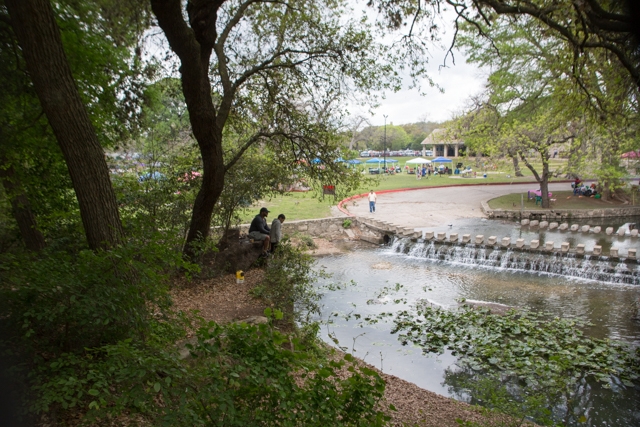