Haven For Hope, where homeless find haven from cold

By the hundreds, the homeless arrive wrapped in blankets, some with threadbare shoes and some with children in tow, bracing against the icy cold gripping San Antonio.

More than 450 homeless people are finding shelter against the Arctic front that has swept through South Texas at Haven For Hope, the sprawling shelter and housing campus that opened last spring at 1 Haven For Hope Way.

Inside, they find warmth, blankets and food but many also choose to stay outside, in the open Prospect Courtyard, buried under mounds of coats and sleeping bags.

“We are able to provide indoor sleeping for our Prospect Courtyard persons, up to a 520 person-sleeping capacity,” said Harvey Mireles, Haven’s Director of Technology and Emergency Response. “Last night of 420 that we did accommodate, 60 of them chose to sleep outside,” he said.

On Wednesday, Feb. 2, Mireles gave NOWCastSA a tour of the lodging capabilities at Haven’s Prospect Courtyard and you can watch it here:

It’s Haven’s first winter since the innovative, 37-acre campus of 15 buildings opened last April to house San Antonio’s homeless population, estimated to be between 2,500 and 3,000 people.

Mireles said that other than a few power outages, Haven has risen to the frigid weather challenge, but he said the facility needs coats, men’s jackets and blankets.

Donations can be dropped off from 8 a.m. to 5 p.m., Monday through Friday at the Haven For Hope campus. More area donation needs can be found at that page.

Only one of its many facilities, Haven’s Prospect Courtyard is more than 650 feet long and more than seven feet high and houses the itinerant homeless population. That is, those who don’t want to leave the streets.

Otherwise, Haven and its 78 non-profit and government partner organizations, provides social, psychological, medical and rehab services to enable those homeless who want to become self-sufficient for the long-term.

Meghan Oswald, Haven's vice president of communications, said the number of homeless people seeking refuge from the cold is up only slightly from the regular numbers of people who arrive at Prospect on normal days, thanks to the partners Haven has.

"We have fellow churches, cafeterias that are opening up their doors to the homeless," she said. "So we're not having the great numbers one would expect given the weather, because there are other places."

Mireles added there are many misconceptions about being homeless. Although it's difficult to keep accurate counts, these are some of the figures from Haven: up to 40 percent have jobs that pay $400 or less, another 30 percent are U.S. veterans and 47 percent are families with children, whose average age is nine-years-old.

More information about Haven For Hope can be found on its website. 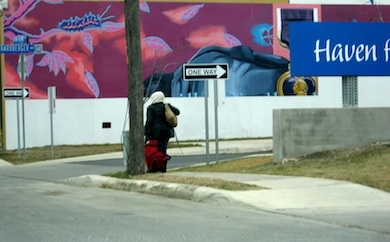